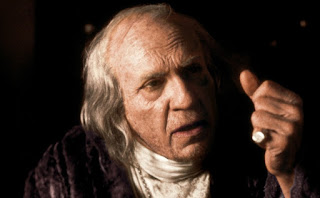 'All I ever wanted was to sing to God. He gave me that longing - and then made me mute. Why? Tell me that. If He didn't want me to serve Him with music, why implant the desire? Like a lust in my body! And then deny me the talent.' - Antonio Salieri, Amadeus (1984)

There is one film of which I have memorized every scene, every line of dialogue, every actor's expression, and every single spectacular note of music. That film, of course, is Star Trek II: The Wrath of Khan. But there is a second film I knew almost as well, and that film is Peter Shaffer's Amadeus (1984, directed by Milos Forman). It is to my mind a perfect film, it is the perfect film, one where every single moment is exactly and exquisitely right. (Note: I admit I was not too crazy about the 2002 Director's Cut, which I think is a perfect illustration of Emperor Joseph's classic admonishment: "There are too many notes. Just cut a few, and it'll be perfect.")

I can still watch the original Amadeus and be as enthralled as I was 28 years ago, because it is not a film you just watch, it is one of those movies you visit and become immersed in from the first scene to the last. It is a sumptuous feast for the eye, as well as one for the ears, and you feel marvelous and giddy just watching the story unfold before you. It is rich in cinematic rewards, with plentiful helpings of comedy and drama and even moments of horror, and every blazing, candlelit ballroom and concert hall is so rich in detail that you have to watch the film several times in order to take it all in. (It took me probably 50 viewings before I realized that nearly every scene shows someone turning a knob or a latch and walking through a door. I have no idea why, or whether it means anything. But there it is.)

And of course, there is the music, which is why we're discussing it here. I am an utter dunce when it comes to classical music, and to be honest much of it tests my patience, for example about 75% of all operas. I realize this is my failing, and not of the art form, which I hold in the highest regard. But when it comes to classical, I could listen to nothing but Mozart all day long and be deeply happy. (I once told that to a cute harpist, who wrinkled her nose at me in disgust -- which she might have done anyway, yes I know -- and then stomped off. Temperamental, these music types.)  It is music that transcends almost every other  composer's work and makes us wonder what the hell it really is and where the hell it came from. "It seemed to me that I was hearing the voice of God," Salieri murmurs, transfixed.

The film and the play it was based on are complete fabrications, as any classical scold of an historian will tell you. Salieri was in fact a great supporter of Mozart and his music, and he hardly tried to murder the guy. But that doesn't matter, because Amadeus was not intended to be historical drama. Amadeus had bigger fish to fry. It uses allegory, rather than history, to ask: What is 'genius'? What is 'talent'? Does God have a hand in art, especially art that is designed to worship Him? Why do some people seem to have tremendous talent, while the rest of us strive to rise above mediocrity? There are no answers to these questions. But I love that we are left to ask them, and I love those unfathomable individuals who we cannot plan for or even see coming -- the Mozarts, Dylans, the Miles Davises, the Muddy Waterses, the Beatles. No one can even begin to explain them, except possibly the fictional Salieri, who in this great, shattering scene is faced with the undeniable force of Mozart's ability and talent and becomes as enthralled and transfixed as the rest of us.