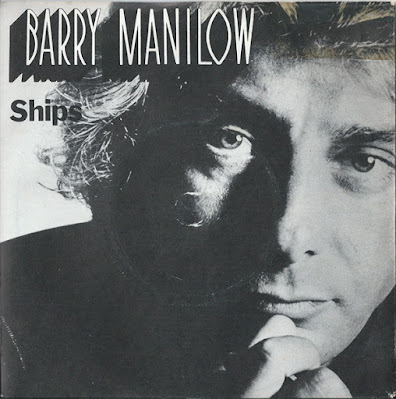 Here come the ballads. And disco was changing into something different, and not better.

First single from Manilow’s album One Voice, and this is an odd one: it was written by rocker Ian Hunter, who’d released it earlier in the year on his LP You’re Never Alone With a Schizophrenic. It was about Hunter’s relationship with his father (Manilow’s own father abandoned his family when Manilow was very young). Hardly the stuff of tender ballads, but they made it work here. From a design standpoint, One Voice was the last Manilow album to use that very 1970s logo font for his name on the album cover—presumably somebody at Arista finally wised up that it had gotten passé. This isn’t the greatest video, but at least it’s from that era.

Capitol Records had Murray in the studio as much as they could there for a few years; she wound up releasing four studio albums in a little over two years between 1978 and 1980. I’ll Always Love You was the parent album for “Broken Hearted Me” (which somewhat gave lie to the album title sentiment), and became Murray’s fourth platinum album in her native Canada (it only reached gold in the States). “Broken Hearted Me” was written by Randy Goodrum, who had also written her “You Needed Me” (plus Michael Johnson’s “Bluer Than Blue” and Gene Cotton’s “Before My Heart Finds Out” in 1978)—he would have a long string of writing credits into the 21st century on the pop, AC, and country charts.

It didn’t start out as a Night song. “If You Remember Me” is the main theme from The Champ, which starred Jon Voight, Faye Dunaway, and Ricky Schroeder in a remake of the 1931 original. It was released as a Chris Thompson standalone single (and was originally listed as such on the Hot 100) a few weeks after Night’s second single, “Cold Wind Across My Heart,” the follow-up to their first hit “Hot Summer Nights.” But “Cold Wind Across My Heart” went nowhere, and when “If You Remember Me” made the top 40, someone at Planet Records decided it was now by Chris Thompson and Night—even though Billboard listed it otherwise, their eponymous album didn’t include the song, and it’s likely Thompson is the only band member on the song (it’s pretty heavily orchestrated; Night was, in theory anyway, a rock band). Anyway, it was added to later pressings of the album. EDIT: I originally claimed this isn’t available on Spotify; it is, but not under either Night or Chris Thompson & Night. It’s available on a Chris Thompson solo best of (albeit at a slightly slower speed than the regular release), and on The Champ soundtrack. Use “If You Remember Me” to search.

Blondie had such a strange Hot 100 chart history. Ten singles reached the chart (nine during their heyday, plus “Maria” in 1999), of which four made #1. Of the remaining six songs, none charted higher than #24. “Dreaming” was their first single off Eat to the Beat, another album that probably lost ground because of the crowded marketplace in 1979 (it peaked on Billboard’s album chart at #17, whereas Parallel Lines went to #6 and Autoamerican to #7; all three went platinum), and it’s pretty great: a typically dispassionate Deborah Harry vocal behind propulsive Clement Burke drumming. (From the lines notes from their Platinum Collection anthology: “Clem: I think I overplayed on the track. Everybody: You did!”)

As disco became a dirty word for Top 40 programmers in late 1979, smooth R&B started to gain some traction. Niteflyte was a two-person outfit, with percussionist Howard Johnson and guitarist Sandy Torano, that did surprisingly well on the pop chart with this song, which peaked on the Billboard R&B chart at #21. It was their one pop hit; they had two songs make the lower reaches of the R&B charts before breaking up in the early 1980s. Johnson would later embark on a solo career, making #6 on the R&B chart and #1 on the dance chart with “So Fine.”

I’m surprised Clive Davis signed off on this song being the first single from Manchester’s 1979 LP Melissa Manchester; Davis loves the ballads and this is a soft disco/rock track. “Pretty Girls” was written by Canadian singer/songwriter Lisa Dal Bello while she was still a teenager, reaching #84 on the Canadian chart, with a slightly more disco arrangement. (Given Dal Bello was 20 years old when the song came out, it’s remarkably aware and cynical about how awful men can be to young women.) Anyway, Manchester’s version managed to barely scrape into the top 40, and considering it’s not on most of her anthologies, I guess Arista changed its mind (it is on The Essential Melissa Manchester-The Arista Years, which was assembled by Sony after they took over Arista). Dal Bello would provide vocals on Boz Scaggs’ 1981 hit “Miss Sun,” and then reinvented herself as an alternative rocker in the late 1980s under the moniker Dalbello.

Yes, you read the song title right—somebody at RCA Records either fell asleep at the switch or decided to see what they could get away with. The song is actually a dance track, which didn’t really fit Milsap’s style, and was the B-side of “In No Time at All,” which made #6 on the Billboard country chart. (Milsap had 48 top 10 country hits between 1974 and 1991—actually, none of them peaked below #6. How does anybody not write about that?) RCA decided to offer “Get It Up” to pop stations, and obviously some of them played it. The title terminology is used so vaguely in the song it would seem everybody involved knew exactly what they were talking about, but who knows? Not available on any of his greatest hits sets; you’ll have to listen to it on the original album, Images.

Light disco by white acts was certainly a thing for a little while, wasn’t it? “What Can I Do With This Broken Heart” was either a very late follow-up to “Love Is the Answer” (which hit #10 for the duo in late May; both songs are on their studio album Dr. Heckle and Mr. Jive) or an early release from their Best of England Dan and John Ford Coley. In either case, radio programmers showed they really weren’t interested in the pair’s music except for the ballads. Disco arranger Gene Page handled the strings on this track; among the other players were Lee Ritenour, Wah Wah Watson, and Richie Zito on guitar (they needed three guitarists?) plus Bill Payne and Michael Boddicker (not the Baltimore Orioles pitcher) on keyboards.

One-hit R&B wonder act from—I’m not even sure. (According to the liner notes, their self-titled album was recorded in Chicago, engineered in Detroit, and remixed in New York.) Produced by Michael Stokes, who also wrote or cowrote most of the songs; Lynn Smith and Robert Carter shared lead vocals. Released by Infinity Records, a subsidiary of MCA, which pulled the plug on the label a few weeks before this song peaked—and if nobody was working your music at a record label, that pretty much brought things to a stop. Infinity had a fairly big hit with Spyro Gyra’s Morning Dance album earlier in the year, but Billboard noted they also distributed an album by Pope John Paul II, which turned out to be a surprising flop and might have been the final straw. Nature’s Divine work isn’t available anywhere anymore except YouTube.

Another one-hit wonder band, although this was a power pop/new wave quintet from Edinburgh, Scotland. Originally starting under the name Badger, The Headboys recorded their first album for RSO Records in 1979, and “The Shape of Things to Come” emerged as their one hit, making #45 in the UK (and earning them an appearance on Top of the Pops), #89 in Australia, and #17 in the Netherlands. But that was it—none of the other singles from their first album charted anywhere, and a second album was recorded but remained unreleased until 2010 (when it emerged as The Lost Album). Of course, that’s the album that you can now download or play on Spotify, The Headboys and “The Shape of Things to Come” are unavailable anywhere except YouTube.

Final Hot 100 chart hit for Nightingale, who had two major top 10 hits in the 1970s in “Right Back Where We Started From” and “Lead Me On.” It’s more uptempo than “Lead Me On”—more along the lines of the light disco mentioned previously. Nightingale landed one more hit on the R&B chart in 1982 with “Turn to Me,” a duet with Motown veteran Jimmy Ruffin (the guy who sang “What Becomes of the Brokenhearted” solo; the guy who sang lead for The Temptations is his brother David). She now mostly performs on the oldies circuit.

Power pop band from Zion, Illinois that issued their first few albums themselves as far back as 1974. By 1979 they’d gotten a contract with Elektra Records, which released Present Tense, the parent album for “Too Late.” It’s somewhat similar to The Records’ “Starry Eyes,” and an example of what Top 40 stations should have been playing in that era. Amazingly, the band is still together—brothers Jeff and John Murphy, along with Gary Klebe, handled guitars, bass, and the songwriting and vocals; they’ve had several drummers over the years. They now run their own label, which has also included such bands as Material Issue and Local H.

Crossposted from Yesterday, Today, and Tomorrow.

Posted by Curt Alliaume at 10:42 AM No comments: