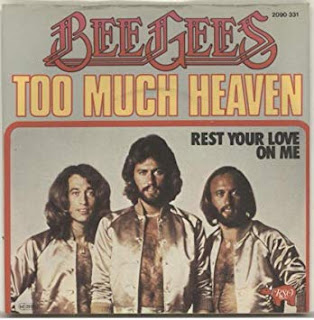 I’m going to try going week by week with 1979, which will be easier given I did about a month’s worth of entries a few years back, so these are reruns. Check in with me again in two months and we’ll see how well I’m keeping up.

The Bee Gees, “Too Much Heaven,” #1, 1/6/1979
Complain all you want about disco, but these guys were primarily balladeers – they had notched 13 top 40 hits in the United States before their first dance tune, “Jive Talkin’,” hit the charts in 1975. This marked the seventh #1 for the group in the States, the third ballad, and the first ballad that wasn’t a rhetorical question (“How Can You Mend a Broken Heart” and “How Deep Is Your Love”). Plenty of overdubs (nine layers of three-part harmony, although Barry has his voice on the track more than Maurice or Robin), and Chicago’s horn section (Lee Loughnane, James Pankow, Walter Parazadier) buried in the mix. (The Bee Gees tended to bring in a lot of big-name help – the only #1 single Stephen Stills ever played on in all his years in the music business was “You Should Be Dancin’.”) This would be the first #1 hit of the year, although Chic’s “Le Freak,” which had already alternated at #1 twice with “You Don’t Bring Me Flowers,” would knock it off after that. The Gibbs would continue to perform the song in later years in concert, but losing the falsetto in the process.

Billy Joel, “My Life,” #3, 1/6/1979
First and biggest hit off Joel’s 52nd Street, this tied “Just the Way You Are” for the highest-charting single of Joel’s career to that point (although both would be topped in subsequent years). A cheerful, don’t-fuck-with-me song (Joel would have several of these in his career) that served as the theme for the 1980-1982 sitcom Bosom Buddies. Two more notes: like “Too Much Heaven,” this also has members of Chicago participating (Peter Cetera and Donnie Dacus contributed backing vocals; both 52nd Street and Chicago’s concurrent Hot Streets were produced by Phil Ramone), and the guy who “closed the shop, sold the house, bought a ticket to the West Coast” is apparently standup comic Richard Lewis. This video is live from Wembley in 1984 - or you can watch the Adult Swim remake of the Bosom Buddies theme, with guest appearances by Joel, Tom Hanks, and Peter Scolari.

Dr. Hook, “Sharing the Night Together,” #6, 1/6/1979
Somehow, Dr. Hook managed to chalk up eight top 15 pop hits between 1972 and 1980 without ever managing to push an album beyond #41. This may have been part of the downside of the group: they weren’t songwriters (humorist Shel Silverstein wrote most of their early songs when they were known as Dr. Hook and the Medicine Show; a variety of songwriters handled the later songs – this one was penned by Ava Aldridge and Eddie Struzick), so they were pretty much at the mercy of their producers. In any case, at this point they’d found a niche as a soft-rock alternative to disco by this point (with many songs, such as this one, extolling the virtues of sex without that messy emotional involvement). One of three chart hits from the 1978 LP Pleasure and Pain.

Dan Hartman, “Instant Replay,” #29, 1/6/1979
A classic of the disco years and hugely catchy, this would be the first chart hit (making #1 on the disco charts) for Hartman, who previously had played bass and sang for the Edgar Winter Group (that’s him singing on “Free Ride”), but could play several instruments, and wrote and produced much of his work. Hartman started out with his own Pennsylvania-based band in the 1960s and also played with Edgar Winter’s brother, Johnny, before striking out on his own. The video is notable for featuring future Kiss guitarist Vinnie Vincent on guitar, future Hall & Oates/Saturday Night Live guitarist G.E. Smith on bass, and Sparks drummer Hilly Michaels - talk about a bunch of hams.

Livingston Taylor, “I Will Be in Love With You,” #30, 1/6/1979
I have a soft spot for Livingston Taylor. In 1992, my wife and I saw him at the Festival of the Eno, a long-running annual event in Durham, NC. Taylor was performing when a very small child wandered by the stage alone, obviously separated from her parents. He brought her up on stage and sang “Twinkle Twinkle Little Star” to her (with the audience chiming in) until her parents found her. Cool guy. Anyway, this was his biggest solo hit, from his first album on Epic Records, Three-Way Mirror. It’s now out of print from Epic, although UMG has it as part of a 20th Century Masters set (however, since the label had to lease the rights from Epic, the song can only be downloaded as part of the entire album, not by itself). Oddly, I can’t find the original on video anywhere, so this duet will have to suffice.

Rick James, “Mary Jane,” #41, 1/6/1979
Here’s the flip side of the Livingston Taylor coin, I suppose. James’ song, the second chart single from his double platinum album Come Get It! celebrates two of what apparently were his primary interests: women and drugs (don’t tell me the name Mary Jane is a coincidence). James’ Motown career took a long time; he originally signed with the label as part of a multiracial band called The Mynah Byrds, which featured Neil Young (yes, that Neil Young) on guitar. It turned out that James was AWOL from the Navy (it also turned out he was underage when he signed up for the Navy), so he spent a year in prison, and the Motown contract dried up after one single. After knocking around as a singer-songwriter and band leader for over a decade, he got a second chance from Motown and took full advantage – Come Get It! was his first of nine albums with the label.

Eddie Money, “You’ve Really Got a Hold on Me,” #72, 1/6/1979
Lackadaisical but passable version of the Miracles 1962 hit, which was later recorded by The Beatles for their first album (albeit without the “’ve” in the first word of the title). Kind of a strange choice for a single – Money had already generated two top 20 singles with his eponymous album, which had been out for nearly a year, and had a second album, Life for the Taking, already just about in the can (it would be released in February), but I’m sure Columbia Records knew what they were doing. Anyway, this one’s kind of hard to find other than on the original album – Money has lots of hits sets, but the only one this appears on is the two-disk The Essential Eddie Money (as opposed to the one-disk The Essential Eddie Money, where it didn’t make the grade).

John Davis, “Ain’t That Enough for You,” #89, 1/6/1979It will be if you listen to the nine-minute version of this song like I’ve got. John Davis was a member of the studio band MFSB (Mother Father Sister Brother) that provided backup on a bunch of Philadelphia International hits in the 1970s, including their own hit “TSOP (The Sound of Philadelphia).” Striking off on his own, John Davis & His Monster Band released three albums on SAM/Columbia between 1978 and 1981, but this was their one chart hit, both in the States and the United Kingdom. A recent interview indicated Davis lives in Ohio with his family.