If You're Only Going to Buy One Greatest Hits Set From... Fats Domino 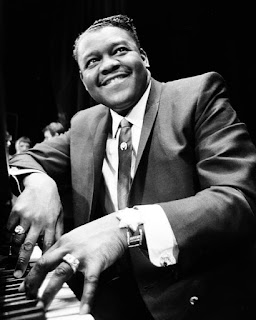 There isn’t much to say about Fats Domino that isn’t already known. Antoine Domino Jr. (yes, that was his real last name; “Fats” was a fairly obvious nickname) was a lifelong Louisiana resident, born in New Orleans in 1928 and dying today at his home in Harvey, on the opposite side of the Mississippi River. In the 89 years in between, he created, with trumpeter/arranger/producer Dave Bartholomew, the boogie-woogie and R&B sounds that became rock and roll standards. Anything from originals like “Ain’t That a Shame” and “I’m Walkin’” to standards like “My Blue Heaven” and “Blueberry Hill” became indelibly associated with The Fat Man. He had 68 songs hit Billboard’s pop singles charts between 1952 and 1968, with many of them double-sided hits. After his chart days ended, Domino continued to tour for years after, then curtailed his touring to play concerts primarily in New Orleans.

Most of Domino’s hits were on Imperial Records in the 1950s and 1960s. When that label started slipping, Domino switched to ABC-Paramount, joining Ray Charles there. Histories note he was forced to record in Memphis and Nashville rather than New Orleans and wasn’t allowed to work with Bartholomew (who, by the way, is still around at age 98), but truth be told he’d stopped hitting the top half of the charts before making the switch in any case. (Felton Jarvis was his producer for ABC, and perhaps while not as sympathetic as Bartholomew, Jarvis would produce Elvis Presley, Mike Nesmith, Willie Nelson, and plenty of other country acts. Perhaps it just wasn’t the right fit.) He made a few other label stops over the next two decades, but the bulk of Domino’s income would come from concerts and songwriting royalties.

Imperial eventually was folded into Capitol Records, which is now part of Universal Music Group – which also inherited ABC-Paramount’s catalog. However, all of the current Domino hits sets only include his Imperial hits – nothing from the later years, including a pretty good version of The Beatles’ “Lady Madonna,” which came out on Reprise. (Paul McCartney had written the song trying to emulate Domino’s sound.) Maybe someday UMG will get around to releasing an all-encompassing set. In the interim, there are a few other options out there. Here’s my choice to start: 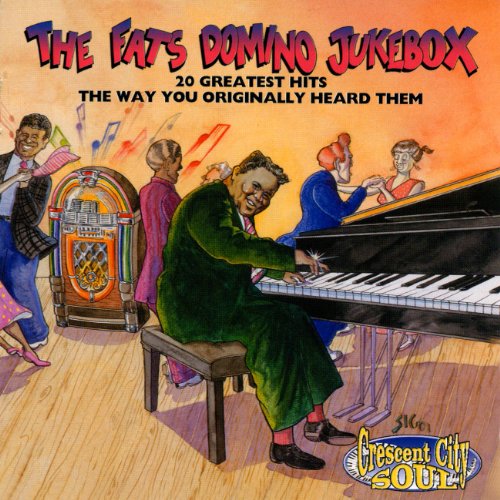 At 20 tracks, this 2002 set is a little skimpy, and at least a couple of seminal hits (“When My Dreamboat Comes Home,” “My Blue Heaven”) aren’t included. But the price is definitely right ($8.99 for the download on either Amazon or iTunes, $7.93 for the disc on Amazon), so you could download those two songs elsewhere and still beat the next-most expensive option. I would recommend this for those who want to watch the budget, but still want a good Fats selection. (Please note most of Fats’ hits ran roughly two minutes long, give or take a few seconds, so a 20-song set isn’t as long as you might think.)

Here are some other options. No links to Wikipedia this time; Fats had so many hits sets nobody’s written them up there.

Legendary Masters (1971) – I purchased this 28-song set on two LPs back when I was in college, and it was nearly impossible to find back then, so you’ll really have to scour the used record stores now. It’s got some decent liner notes and pretty much all of the good Imperial hits. I don’t think this ever came out on CD.

My Blue Heaven: The Best of Fats Domino (1990) – another 20-song set (it’s only 44 minutes long), and I have this. The song selection may be slightly better (“When My Dreamboat Comes Home” and “Blue Monday” are here), but it’s not significantly different from The Fats Domino Jukebox – and it’s out of print and unavailable for download, anyway.

They Call Me The Fat Man (1991) – record companies were releasing box sets in record numbers in the early 1990s, and I guess Capitol did pretty well with this one; it’s still in print and available for download. My gripe is the songs aren’t in chronological order, and even though there are four discs and 100 songs, not every chart hit is here (and, as I noted, even 25 songs/disc means there’s still a bunch of unused space). You’ll need to be a major Domino fan to purchase this one. $47.49 for the Amazon download and $49.99 on iTunes; $48.99 for the physical box set on Amazon, which comes with an 84-page booklet.

Greatest Hits: Walking to New Orleans (2007) – released after a burst of publicity after Hurricane Katrina (Domino waited out the storm at his home, primarily because his wife Rosemary was in poor health), this is a perfectly good 30-song set that just misses besting The Fats Domino Jukebox because of the price point. The only top 20 hit missing is 1960’s “Three Nights a Week,” which you can probably skip. $11.49 for the physical disc on Amazon, $13.49 for the download ($13.99 on iTunes). It’s real close between this and Fats Domino Jukebox – if you feel like spending the extra few bucks, do it.

Sweet Patootie: The Complete Reprise Recordings (2009) – “Lady Madonna” was the only chart hit from the Reprise years (the late 1960s and early 1970s), so don’t think you’re getting the classics here (although Domino didn’t rerecord any of his old hits for the label). It’s an option to hear more Fats, but it’s not a hits set. $12.49 for the download on Amazon and $12.99 on iTunes; it appears to be out of print on disc.

All-Time Greatest Hits (2011) – Curb Records has been leasing out catalogs for years, cherrypicking the best songs and putting a fairly high price on the finished product (and allowing only the entire album to download, rather than selected songs). 13 songs here, which is a little short; at least UMG usually prices their shorter reissues at bargain prices (I guess they haven’t gotten around to Fats yet). $9.49 for the download and $13.74 for the disc on Amazon; obviously you’re much better off with The Fats Domino Jukebox.

The Complete Hits 1950-62 (2015) – I hate, hate, hate to recommend sets on nonamo record labels, but I’m making an exception here. Acrobat Records appears to be a reissue label in England that takes advantage of the more lax copyright laws there (anything older than 50 years old goes into the public domain – the United States seems to be pushing that back further and further, probably on the behest of the Disney Company so that 90-year-old Mickey Mouse cartoons don’t fall into the hands of cheap DVD manufacturers). Anyway, the result is this three-disc, 79-song set, which is probably not from the original master tapes (if they even exist anymore), but from what I’ve heard, they sound like the original recordings – and I’ve got to say it isn’t like the original recordings were all that well recorded anyway. This has every chart hit from Fats that appeared on Imperial, and in chronological order, too. I will probably download this someday. Not available for download on Amazon or iTunes, but $16.62 for the three physical discs – certainly a better option than They Call Me the Fat Man. (Note to Naperville, IL residents like me: this is available for download through our library system, or for streaming.)

Note: I’m also in the market for Live From Austin, TX: Fats Domino (2006), which comes from a 1987 concert recorded for the PBS series Austin City Limits. The DVD itself is out of print, but there are a few clips available on YouTube, and it looks like Fats is having a ball.

Here are Fats Domino’s hits and where to find them:

Posted by Curt Alliaume at 4:35 PM No comments: