Songs You'll Only Listen to Once: Frank Sinatra, "L.A. Is My Lady" 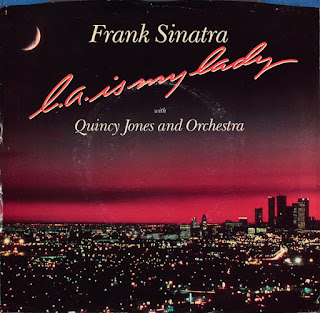 I’m not sure this fits the category, since it’s not a dreadful song. But this is an example of an ill-conceived song that hasn’t aged well.

Back in 1984, Frank Sinatra was still touring and very occasionally recording music. He had gotten smart about making occasional albums after the first few released after his “retirement” in 1971 didn’t sell as much as you would think. Trilogy: Past, Present, and Future was a deservedly a big seller, and while She Shot Me Down wasn’t, it is a great album made for good reasons—Sinatra wanted to make something with one of his favorite arrangers, Gordon Jenkins, who was ill with ALS (Jenkins “Future” portion of Trilogy had gotten a lot of criticism, and Sinatra didn’t want that to be Jenkins’ final recorded work). Sinatra had worked with Quincy Jones a few times in the 1960s, and they had gotten along well. Since Jones was now the hottest music producer on the planet (thanks to Michael Jackson and Thriller) it made sense to give it another go. The original plan was for Sinatra to do a record with Lena Horne, who had just won a Grammy working with Quincy Jones, but that plan was dropped.

The end album result was a Sinatra solo, with primarily standards (and “How Do You Keep the Music Playing?”, which became a standard). But for the album’s centerpiece, they went in a different direction. “Theme From New York, New York” had become a top 40 hit four years before and was Sinatra’s biggest hit on the Billboard Hot 100 since 1969’s “My Way”. Even after it fell off the charts, it became a surprise hit at parties and dances, usually as the last song of the evening, complete with a kick line. So I’m sure Jones said, “Hey, why not try it again for Los Angeles—and why can’t I get a piece of the action this time?”

“L.A. Is My Lady,” cowritten by Jones, his wife Peggy Lipton, and Sinatra's favorites Alan and Marilyn Bergman, was the result. With a synth line running throughout (surely one of the few times synthesizers were used on a Sinatra record), it doesn’t have the sound of “New York, New York,” but it has everything else, including the tempo shift/kick line section at the end.

The weirdest part of this song is the music video. In 1984, everybody made music videos to get them on MTV (there weren’t really any other outlets for them at the time; even VH1 hadn’t started up yet), but MTV mostly stuck with AOR/rock acts until Michael Jackson forced them to play black acts as well. Still, MTV didn’t want to play singers your parents listened to such as Sinatra. So the result was a Frank Sinatra video with very little Sinatra in it (I’m not sure that was a conscious decision on the part of the video director or Sinatra just declined to film anything new--he does appear in a few older clips). It does have an endless stream of cameos from people in the entertainment business at the time, as well as Sinatra buddies. I’ve managed to identify all but one of them (the running times correspond to the first appearance that person made in the video):

1:29 – unknown actor (this one is driving me crazy, so please send your ideas!) and Michael McDonald, singer

So no Ol’ Blue Eyes except in retrospective footage, but we get Missing Persons instead. Whee!

Anyway, the song became the title track for L.A. Is My Lady, which was released on Jones’ label Q Records. (Sinatra’s label normally was Reprise, which he’d sold off to Warner Brothers a few years after starting it.) “L.A. Is My Lady” didn’t become the hit everybody expected (it didn’t even make the Billboard Hot 100, although it did peak at #34 on the AC chart), and with the synthesizer dominating the arrangements it couldn't be duplicated easily in concert. (According to Setlist.fm, Sinatra did use it pretty regularly between 1984 and 1986, but I think it was gone thereafter.) It’s available for download or streaming either on L.A. Is My Lady and the best-of Sinatra Sings Alan & Marilyn Bergman, and there are few live versions (with a notably different, small-combo jazz arrangement) for streaming or download as well.