This is why you need me around.  There are so many choices, it’s hard to make a good call.


The Temptations have been recording, in one form or another, since 1960, with their most recent album coming out in 2010.  They started out by combining two different Detroit groups – Paul Williams and Eddie Kendricks came from The Primes, and Otis Williams, Elbridge Bryant, and Melvin Franklin were part of The Distants.


Since then, the shuffle among group members has been endless (Otis Williams is the only surviving member of those original five), but they’re still hitting the boards (and they ain’t cheap – they’re playing here in Naperville next May, with tickets starting at $145; The Temptations Review, with former lead singer Dennis Edwards and Paul Williams’ son as the leads, also tour).  That’s a lot of money to shell out, but given Otis Williams turns 74 years old today (happy birthday, Otis!) and may call it a day soon (the youngest of the current group, Bruce Williamson, is 45), it may be now or never.


Anyway, the good news is all but two of their studio albums are now under the Universal Music Group umbrella (and there’s nothing you’ve ever heard of on the other two), the bad news is it’s real easy to get something mediocre without looking a bit.  There are also some no-name labels selling best-ofs as well (which sound a lot like the originals – it may be Dennis Edwards’ Temptations Review); my rule of thumb is if the cover looks like it was created in Microsoft Word and the label isn’t Motown, Gordy, or Universal, leave it alone.  (After having written this, even I was surprised by one of the options – read on.)
The Temptations have had 60 songs over the years that have made either top 40 pop or top 20 R&B, so there’s a lot of ground to cover.  Accordingly, I’m going to… have to recommend a two-disk set. 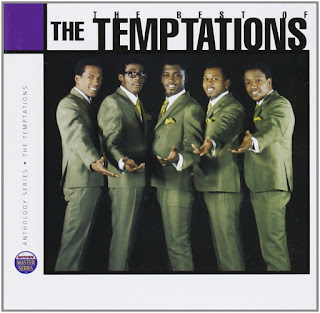 Anthology: The Best of The Temptations


It’s fairly complete – covering the period between the group’s first big hit (1964’s “The Way You Do the Things You Do”) and their last pop top 10 (1973’s “Masterpiece”), only four of those 60 songs are left out – the oddball "Ungena Za Ulimwengu (Unite The World)" (producer Norman Whitfield’s reach exceeded his grasp on that one), the meh 1972 song “Take a Look Around,” and two lesser collaborations with Diana Ross & The Supremes, “I’ll Try Something New” and “The Weight.”   Other than that, all of their hits from that era are here, along with, strangely, a few non-hits and the occasional unreleased song to reel in collectors (“Lullaby of Love”).


Motown has released three different albums under this name for The Temptations – one in the 1970s (vinyl only, which is the version I own), one on CD in the 1980s, and a third one on CD in 1995, which is the one you want.  With 46 songs clocking in at over two and a half hours, the CDs are both pretty much filled to the 80-minute limit.


Another couple of oddities for those buying on Amazon – the list price for the CDs is $12.52 (which makes me think they may be running out shortly), and the download is $18.99.  The CD listing only lists the first disk, but make no mistake – this is a two-disk set.  I would order the CD, which I’m sure comes with liner notes – and it’s six dollars less anyway.


Other options, with Wikipedia links included when available:

David Ruffin and Eddie Kendricks do have solo greatest hits sets in print (the others do not); if you can’t find One on One as mentioned above, here are the options.

For reference, here are the groups pop and R&B hits – and what’s represented on Number 1s and Anthology.

Posted by Curt Alliaume at 2:11 PM No comments: