If You're Only Going to Buy One Greatest Hits Set From... Dan Fogelberg

Just wanted to see if you’re paying attention.  Seriously, Dan Fogelberg got kind of a bad rap over the peak years of his career, which has slowly faded away since his death from prostate cancer in 2007.  As far as I can tell, his career had three distinct phases:
Anyway, Fogelberg has had a number of best-ofs released over the years, which means pointing everyone in the right direction is a good idea.  And although I don’t really consider myself a big fan, I realized this week I have 40 percent of his studio albums (counting the two Weisberg collaborations, and discounting a Christmas album) plus a box set, so I’m probably better equipped to write this than I thought.

Quick note:  Fogelberg was on Epic/Sony for the vast majority of his career, but he also released the Christmas album and a live album on the band Chicago’s short-lived label (they eventually decided it wasn’t worth the bother and moved their back catalogue to Rhino), the second collaboration with Tim Weisberg on Giant (his manager Irving Azoff’s short-lived label), and one studio album on his own label, distributed by Jimmy Buffett’s record company.  You won’t find any of that stuff on the greatest hits sets, partially because Sony probably didn’t want to pay to lease any of the music, and partially because none of the songs were hits.

In any case, here’s the best option:

17 songs clocking in at over 74 minutes, and the only major hit missing from the compilation is “The Power of Gold,” done with Weisberg.  (Two guesses on why it might be missing:  either Fogelberg wanted it to be a pure Fogelberg-only compilation, or he was a little ticked off at Weisberg, who sued him in 1997 for alleged breach of contract and fraud over their followup collaboration No Resemblance Whatsoever.)  Anyway, all of the major hits from the early 1980s are here, along with some misses from the late 1980s and early 1990s – and that’s not a claim most of the other single-disk sets can make. (I might have chosen to put something on from Nether Lands, his 1977 hit album without any hit singles, but it’s not a deal breaker.)  Plus the price is right - $6.99 for the disk and $8.99 for the download on Amazon, $9.99 for the download on iTunes.

I’m going to take a detour here to make a point clearly that I’ve made in passing before – if the price of the disk is as cheap or cheaper than the download, for God’s sake buy the disk.  You’re getting the liner notes (assuming there are some) as well, and even if the shipping is an issue, you can usually find enough other stuff you need or want on Amazon to bring it down to free shipping.  And, as many articles have pointed out, you don’t actually own what you download – it’s like a long-term lease with no option to buy.

Off the soapbox.  Here are the other Fogelberg options (links go to Wikipedia when they’re available):

Greatest Hits (1982) – Perfectly reasonable hits set released at the peak of his career; doesn’t miss any of the hits to that point, and it’s actually the biggest seller in his catalogue.  Minuses:  having been released in late 1982, it only represents half of his career overall, and the stupid cover design, which was done to accommodate a new display record stores briefly tried out.  I guess Sony is trying to put this one out of print - it's not available for download, and the disk itself is $15.98 on Amazon.  Still, if you come across it at a used CD store it's a perfectly good choice.

Love Songs (1995) – I hate these things with a blind fury, and even Fogelberg’s makes no sense – which seems odd, given love songs represented about 90 percent of his output.  But not every one of his songs belongs to a set that seems designed to set a mood, which is obvious given the disparity between the wedding standard “Longer,” the loving tribute to his father “Leader of the Band,” the letdown song “Hard to Say,” and the bitter post-divorce epic “Seeing You Again” – all of which are included here.  Still thinking about getting your freak on after hearing those on shuffle play?  Mercifully out of print on disk, $8.99/$9.99 for the download on Amazon/iTunes.

Portrait (1997) – Four CDs worth of music after Fogelberg left Epic in the mid-1990s, which is probably too much for most fans, although it does have a few songs not available elsewhere.  Organized into four themes – Hits, Ballads, Rock & Roll, Tales & Travels – with notes on each song, personnel notes, and a lengthy biography.  This is the one I have – bought from BMG Music Service at a time when they marked box sets way, way down.  Unfortunately, the physical box set is out of print (maybe not completely unfortunate – the box design is terrible, and all of the disk holders arrived broken, so I have to be very careful removing the set from the shelf), so you can get the music for $29.99 off either Amazon or iTunes, but not the liner notes.

Promises (1998) – To be filed under “Greatest Hits Sets for Schmucks.”  10 songs, two chart hits with a mishmash of other stuff, apparently for those who already had Greatest Hits but couldn’t afford Portrait.  Bargain priced at the time of release, it’s now $16 on Amazon.  Not available for download.

Super Hits (2001) – Another bargain set, this one has three top 40 hits among its 10 songs, so you’re getting a bunch of “hits” that weren’t.  Oddly, available for download at $5.99 on both Amazon and iTunes (most of Sony’s Super Hits sets aren’t downloadable), $7.99 for the disk on Amazon.

The Essential Dan Fogelberg (2003) – I guess when Sony started releasing these things, Dan was only worthy of a one-disk set.  14 songs, reasonable selection (“The Power of Gold” is here), but since this is shorter than Very Best for the same price (actually, it’s a buck more on Amazon for the download; the disk itself is out of print), why would you bother?

Playlist: The Very Best of Dan Fogelberg (2009) – This is actually a perfectly reasonable, slightly cheaper alternative to Very Best of.  At 14 songs, it’s three songs shorter, but it does have all of his 11 top 40 hits (including “The Power of Gold”).  $5.99 for the disk, $7.99 for the download on Amazon (iTunes doesn’t have it, however).  If you want to go cheaper, this is a fine option; at the very least it’s infinitely preferable to Super Hits.

The Essential Dan Fogelberg (2014) – Ooh, it’s Déjà Vu All Over Again.  Eleven years later, whoever was running Sony’s reissue program decided Fogelberg was worthy of a two-disk set in the Essentials series – but they didn’t pull the one-disk Essential set off the download market.  So now you can have two.  I really wish they’d put this one in chronological order – most of the Essentials sets are – but that’s a personal preference.  This one doesn’t seem to be available on disk, but $14.99 for a two-disk download is a reasonable purchase, and it’s a good compromise for those who want more than the one-disk sets but don’t want to splurge 30 dollars for Portrait.  The way to tell the difference between the two identically titled sets if you’re going to download one:  the one disk-set is $9.99 for 14 songs whereas the two-disk set is $14.99 for 28 songs, and Fogelberg is beard-free on the one-disk set but bearded on the second disk.

Totally irrelevant side note:  after Fogelberg shaved his beard, if he was a twin son with anybody named Tim, it was Tim Matheson. 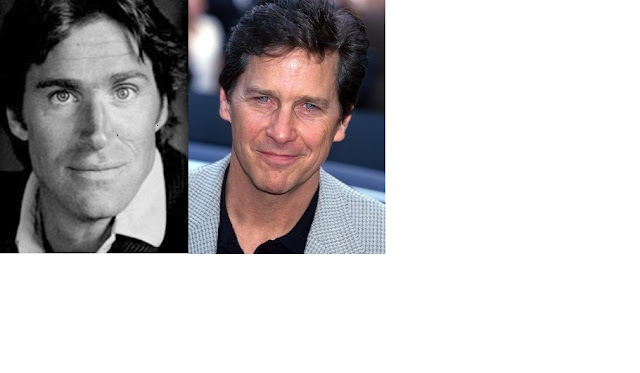 Posted by Curt Alliaume at 1:32 PM