Luck Ain't Much Good to You

Nebraska outtake.
Posted by John E. Williams at 7:48 AM No comments:


10. Michael Jackson, "We Are the World" - Michael's demo for the charity disc.

6. Appolonia 6, "Manic Monday" - Prince turned his roving eye to Susanna Hoffs, and the Bangles got the hit instead.

What Costume Shall the Poor Girl Wear?

Posted by John E. Williams at 8:00 AM No comments:

Here's to Roy Edroso and his good health.

Just before CBGBs closed its doors for good in 2006, Roy played bass at a gig by the legendary songwriter Lach. This is that performance.

This is the Father's Day post. In addition to the list of Dad Songs, I'm also invited people to add personal songs about, or for, or in memory of their fathers via Facebook. Both parts of the post will remain open to contribution, so feel free to add your own. This post is of course dedicated to my wonderful dad, Jerry. 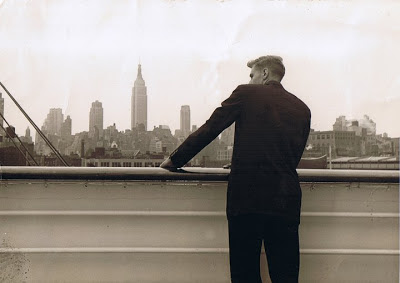 Steve Van Zandt on all things Little Steven, Plus Stuff About Bruce

"Right now, and we were just talking about this last week, the only album that has been totally ignored is what I think is one of the best albums he's ever done, which is The Promise... The entire Promise album is absolutely remarkable. I'm hoping we start playing it."

I always thought Van Zandt was Springsteen's best critic, and I mean that in every good sense of the word. I think he sometimes understands the quality Bruce's music better than Bruce does. In the Born to Run 30th anniversary documentary, while the rest of the players talk about how much sweat and hard work went into the eighteen month-long recording of the "Born to Run" single, Van Zandt grins and declares it to be a little much, and adds that a good single should take maybe three hours. He's a wise man, is Steve.

Also: Westerberg recently wrote an editorial about songwriting for the New York Times.
Posted by John E. Williams at 11:50 PM No comments:

Posted by John E. Williams at 8:38 PM No comments:

Herewith a gathering of the musical contingent on my Facebook friends list. The 'famous' ones are included only if I have had some kind of direct FB contact with them, from the briefest hello to the lengthiest discussions. They are, regardless of level of fame, a truly talented and inspiring group of people, and it's fun to have them around.

Let me know if I missed anyone.

Summer of '83 - A Nostalgic Ramble

My favorite summer of my youth was 1983. This was because despite the absence of a new Springsteen album (when oh when was Murder, Inc. going to be released?!?) and a new Star Trek movie (Return of the Jedi had to do instead; by the end of the summer I had seen it about 8 times and was sick of it). It was a summer that made few demands on me -- I was a year out of high school, with no serious life goal in mind. I was working as a shift supervisor at a Friendly's restaurant that I considered more a clubhouse and 24-hour social hall than a job. And I was taking a few college classes to make up for my screwing around the previous semester at Seton Hall.

In light of the not-at-all surprising revelations about the NSA and phone and e-mail data, herewith a suitable soundtrack. As always, feel free to add your own.

More after the cut.

You Made Me Cry

Born in the USA was released 29 years ago today.  Here's my assessment of the album, three decades in the making:

First, my complaints. Born in the USA took Bruce out of Jersey and made him an international phenomenon, which isn't bad in and of itself (depending on your view), but it did distance him from his core audience; the album instantly produced a massive crop of bandanna-wearin' musclehead fans who willfully misunderstood the title track (and still do); Bruce went from scrawny, soulful street tough to calculated fitness buff (in the "Dancing in the Dark" video Bruce looks, as Bobcat Goldthwait said at the time, like a member of Up With People); "Glory Days" was a dopey song; it was suddenly even harder in the NY/NJ area to get concert tickets; Steve Van Zandt left the band to make screechy political albums (before returning to earth in time to give us Silvio Dante); Bruce dated (and married) a supermodel; "Downbound Train" is just plain stupid; and finally, for the first time, Bruce lip-synched in videos. (This list may be some people's highlights, rather than complaints, and if so then you may go in peace.)

On the positive side:
I spent two summers seeing him at the Meadowlands again and again, which was great once you got past the whole football stadium atmosphere; there was an explosion of fantastic live and studio bootlegs that jump-started not only my already-intense fannishness but greatly inspired my own singing and performing at the time; certain girls suddenly found me that much more interesting because I knew all things Bruce and could play almost all his songs; if you were a fan you wanted Bruce to succeed so he could sustain a career, and clearly he did; and Bruce's own reaction to the fame and the failed supermodel marriage informed  Tunnel of Love, which remains for me his finest album and one of the greatest collections of songs about love and marriage ever recorded. So there's that.

And finally, if you hear it right, the title track is the most powerful song about American combat vets in the history of pop music. I wish we had all heeded it better, since there are  modern vets currently living out almost every word.

Been Told A Long Time Ago

This past Saturday, June 1, the members of my first band, The Hot Rods (sans one), reunited as a musical group for the first time in over 30 years. Not bad for a bunch of guys who hadn't rehearsed together since 1981.