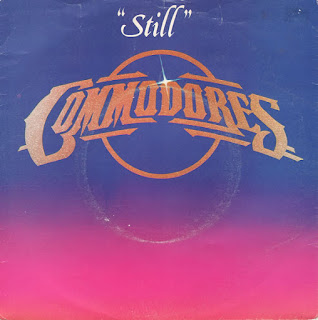 One huge hit that still gets regular airplay in several formats, and three other top 20 songs I rarely hear anymore.

Mammoth hit for the band, and it’s yet another Lionel Richie ballad. (Of the band’s eight top five pop hits, six of them were Richie ballads; the others were the funk masterpiece “Brick House” and the post-Richie “Nightshift.”) Two weird things about this song and its predecessor: “Still” was released as a single while “Sail On” was still moving up the charts (“Sail On” was #8 with a bullet the week “Still” debuted on the Hot 100), meaning some of the “Sail On” sales and airplay might have been diluted as a result, and both songs, despite their romantic sound, are actually kiss-off songs—they make it clear that the relationships are at their end. It makes one wonder about Lionel: was everything okay at home? (I think it was at that point, but that wasn’t the case later on.)

Second consecutive top 10 hit for Rogers, who had hit #5 with “She Believes in Me” earlier in the year. The song was also #1 country and #2 adult contemporary in America, and #1 country and adult contemporary in Canada. Cowritten by Debbie Hupp and Bob Morrison (Morrison would cowrite an even bigger hit the following year with Johnny Lee’s “Looking for Love”), this was the start of Rogers slowly edging away from story songs (like “Lucille” and “The Gambler”), although he still would chart the occasional narrative after that.

A true one-hit wonder, “Come to Me” would be Joli’s sole Hot 100 hit. She was just 16 when the song was released; she’d been appearing in television commercials and talent shows from the time show was 11. Disco was on the way out by the time this song charted, and while the 16-year-old Joli made for an interesting story, the song’s lyric was just on the edge of being a little icky as well. This song hit #1 for three weeks on Billboard’s Dance chart, as did its follow-up, “Don’t Stop Dancing” (and she had nine more Dance chart hits through 1997), but the pop records never happened again after that. Joli still performs today.

Former WCBS-FM air personality Bob Shannon used to run an occasional feature called “First and Foremost,” playing a record that was the “original” recording, and then the hit version. The Michael Johnson version of “This Night Won’t Last Forever” was the foremost version of the song, but it wasn’t the first—singer/songwriter Bill LaBounty cowrote the original, which peaked at #65 in July 1978. And it’s a totally different version—LaBounty’s protagonist comes to the party all alone but it’s clear he’s met someone by the third verse, and he can join the party too. Johnson’s version shuffles the lyrics around, adds a bridge, and has him left stranded by his girlfriend at the party, making it as sad as possible.

Oy, what a stinker. Another disco song released too late to catch the wave. Here’s the story from Elton’s autobiography, Me: “It was good to see [songwriter/producer] Pete Bellotte again, and the album we made might have worked, had I not decided that I wasn’t going to write any songs for it—I’d just sing whatever Pete and his staff writers came up with. I suspect the thinking behind this idea was influenced by the fact that I only owed my American label [MCA] a couple more albums. I was still furious about them refusing to release “Song for Guy” [as a single; they actually did but it didn’t chart] and had decided that I wanted to get out of my contract as quickly as possible, with the minimum of effort. Not everything on Victim of Love was terrible—if the title track had come on at Studio 54, I’d have danced to it—but making an album in bad faith like that is never a good idea. No matter what you do, it somehow gets into the music: you can just tell it’s not coming from an honest place. Furthermore, it was released at the end of 1979, just as a huge backlash against disco started in the States, with particular venom reserved for rock artists who had dared to dabble in the genre. Victim of Love sank like a stone on both sides of the Atlantic.” And deservedly so.

Third single from Discovery, and this did very well almost everywhere except the United States—it was a top 10 hit in the United Kingdom, Austria, France, Germany, Ireland, the Netherlands, and South Africa. For the US, it might have been a combination of factors: third singles are hard to get started on the radio, the market was packed with top AOR acts (plus it might have been too slow for AOR but too loud for adult contemporary), and there may have been some backlash (as Elton John alluded to) about ELO’s brush with disco on “Shine a Little Love.” In any case, it’s a decent enough song, with a good Jeff Lynne vocal.

No relation to the Janet Jackson song of the same name from 1986 (unfortunately). This was actually the third single from Garrett’s album Feel the Need. I’m not sure whether Scotti Brothers was just taking its time releasing singles or was taking awhile for them to chart (the first single, “I Was Made for Dancin’,” peaked in mid-February and the title track in early June—by November it’s likely copies of the album had been returned by the stores to Atlantic Records. Anyway, it’s a drippy ballad rather than disco, so while it made #11 on the AC chart, this was the beginning of the end of Garrett’s teenybopper idol career. November 1979 was also the same month Garrett crashed a car while drunk and on Quaaludes, leaving the passenger in his car a paraplegic. There are two really odd videos for this one, so I’ll just post them both. One is from the Miss Teen USA competition, with Bob Barker, Garrett, and some pretty tall contestants. And the other is apparently from a TV special he did in 1979; both Marie Osmond and Brooke Shields appear to be his paramours (I would hope that wasn’t the case in real life).

Tim Curry became an underground sensation of sorts in the late 1970s, after a musical film he did in 1975, The Rocky Horror Picture Show, became a cult favorite, appearing on college campuses and major cities in midnight showings for years. Curry (along with such costars as Susan Sarandon, Barry Bostwick, and Meat Loaf) had their careers launched or rejuvenated by this, and beside his long career on the stage, in film and on television, he launched a music career as well. (He provides the male counterpoint vocal on Carly Simon’s “Vengeance,” which hit the charts earlier in 1979.) This is in the Rocky Horror vein and name drops like crazy, even if some of the names aren’t familiar today (“Liz and Dick and Britt and Liza/Jaclyn, Kate, and Farrah/Meg and Roddy, John Travolta/Governor Brown and Linda”). It’s hard to categorize musically (I have it on a Rhino New Wave Hits of the ‘80s set, even though it didn’t come out in the ‘80s and isn’t particularly new wave, either). Curry released three albums in all. He’s still working, although a 2015 stroke has left him wheelchair bound.

Foley is another singer/actor that is probably best known for one quintessential 1970s moment—in her case, she provided all the female and counterpoint vocals on Meat Loaf’s Bat Out of Hell, including “Paradise by the Dashboard Light.” (Don’t look for her on the video; Foley wasn’t able to tour with Meat Loaf, so while her voice can be heard, the woman shown is Karla DeVito.) Foley had already starred in a short-run variety show on NBC, 3 Girls 3, with Debbie Allen and Mimi Kennedy, and had done Hair on Broadway; in 1979 she started recording with Epic Records. This song hit #7 in the Netherlands, but didn’t come close in America—and was her only hit here (her “We Belong to the Night” made it to #1 in the Netherlands and made top 20 in two other countries). Her 1979 album Night Out was produced by Ian Hunter and Mick Ronson while 1981’s Spirit of St. Louis was produced by Mick Jones of The Clash, but nothing really stuck in the States. She’s also been seen as an actress, with roles in Tootsie and Married to the Mob, and starred on Night Court from 1984 to 1985 as public defender Billie Young.