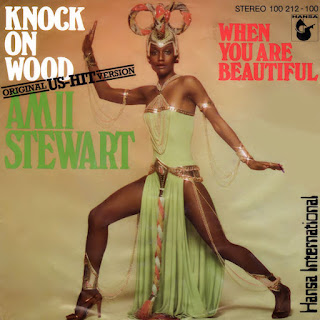 Lots of entries this week. Lots of disco. Not a lot of memorable tunes.

Amii Stewart, “Knock On Wood,” #1, 4/21/79
Remaking classic songs with a disco backbeat started not long after disco itself did, and while some were definitely worthwhile (Gloria Gaynor’s remake of The Jackson 5’s “Never Can Say Goodbye” comes to mind), there were some that weren’t (such as The Beach Boys’ remake of their own “Here Comes the Night,” as I mentioned in Part 14). This probably falls closer to the Gloria Gaynor side of the spectrum, depending on how you felt about the original Eddie Floyd version (a Stax hit in 1966). Barry Leng produced the song and her first album (also called Knock On Wood after seeing Stewart in a traveling production of Bubbling Brown Sugar in London. This was one of Ariola America Records’ two #1 hits (the other was “Torn Between Two Lovers” by Mary MacGregor).

Bell & James, “Livin’ It Up (Friday Night),” #15, 4/21/79
It always helps to have friends and relatives in high places. In LeRoy Bell’s case, the relative who helped his career was his uncle, producer Thom Bell, who worked with The Spinners on most of their biggest hits. Bell and Casey James were in a band together, Special Blend, before striking off on their own as songwriters, placing tunes with The Spinners, The Temptations, Gladys Knight & The Pips, The Three Degrees, and Elton John (they worked together with Elton and Thom Bell on The Thom Bell Sessions, a half-finished attempt for Elton to branch out after he temporarily stopped working with Bernie Taupin). Anyway, A&M signed up Bell & James in 1978, and their first album produced this classic work’s-over-for-the-weekend song, which has had a long radio station shelf life as a result. Bell & James never had a hit after this single other than a few minor R&B chart placements, and broke up in the early 1980s.

Herbie Mann, “Superman,” #26, 4/21/79
Who knew jazz flutist Mann had nine Billboard chart hits? This was the last of them, and the second of three 1979 songs to feature Superman in the title (and seven in the decade total – no such love for Batman in the 1970s). This wasn’t an original – Celi Bee & Buzzy Bunch hit #41 with their disco version of the same song in 1977, and other than the occasional flute fills, they don’t sound all that different. In this version, the female singer starts about singing about Superman saving her from the bad guys, but changes her pronouns slightly as the song progresses, indicating a more intimate relationship with the Man of Steel. Mann released dozens of albums in his lifetime, the vast majority on Atlantic Records, using a wide variety of musical styles. He died of prostate cancer in 2003 at the age of 73.

Linda Clifford, “Bridge Over Troubled Water,” #41, 4/21/79
Regarding what I said earlier, some songs just don’t lend themselves to disco remakes. Clifford had a minor hit in 1978 with a remake of “If My Friends Could See Me Now” from the musical Sweet Charity, which somehow led to her releasing a double vinyl album, Let Me Be Your Woman, in early 1979, even though the total running time was only 54:34 (most other countries squeezed the material onto one LP by editing some of the longer songs). The classic Simon & Garfunkel song became the leadoff track, and just missed the top 40. This was released by Curtis Mayfield’s label, Curtom Records (distributed by RSO); unfortunately Mayfield’s imprimatur was not what it had been in the first half of the decade. Nice bridge for this video – I guess the East River was troubled at that point.

Delegation, “Oh Honey,” #45, 4/21/79
British vocal trio that managed to chalk up their one and only American hit on an independent label off an album that had come out over a year and a half before – I guess that’s worth some recognition. They did a bit better in the United Kingdom and on the U.S. R&B charts, with their biggest hit in Britain happening in 1977 with “Where Is the Love (We Used to Know).” Produced by Ken Gold, who had better luck in the U.K. with another R&B vocal act The Real Thing (their “You to Me Are Everything” hit #1 there in 1976).

Boston, “Feelin’ Satisfied,” #46, 4/21/79
When Tom Scholz sued Epic Records (and vice versa), it was probably over songs like this one, which seems a little half-finished to me. Another celebration of rock and roll music (see “Rock and Roll Band” off their debut LP), “Feelin’ Satisfied” was probably titled as such to avoid confusion with the earlier song. This would be the last Boston release for eight years; after Scholz won his freedom from Epic Records, the band moved to MCA and released Third Stage. This post in Classic Rock ranked the song seventh all time in Boston’s pantheon – which I don’t buy; I’d put “Cool the Engines,” “We’re Ready,” and “Hitch a Ride” before this any day of the week.
Ray Stevens, “I Need Your Help Barry Manilow,” #49 4/21/79
A parody that probably came a year too late, “I Need Your Help Barry Manilow” is arranged and written in typical Manilow ballad style (key change, tympani at the end, horn blast, etc.). I grabbed it when I first heard it, but it wasn’t quite funny enough to really get programmers to add it at top 40 radio (maybe they were worried about pissing off Manilow, although a 1979 People article indicated he seemed to be okay with it). This was the last of Stevens’ 26th Hot 100 hits (and it’s totally out of print to my knowledge) – most were parodies or goofs (“Gitarzan,” “The Streak”), but he could also be serious (“Everything Is Beautiful”). Since then, he’s been all comedy, focused mostly on performing in and around Nashville, releasing videos and songs himself. Too bad he’s also become a Tea Partier, with some of his material reflecting his newfound beliefs.

Maureen McGovern, “Can You Read My Mind,” #52, 4/21/79
Another Superman­­-related song, although Superman didn’t appear in the title, nor was this part of the 1978 movie’s official soundtrack. The song did appear in the movie as an instrumental (originally Margot Kidder was slated to sing it, but director Richard Donner switched it to a voiceover), but McGovern recorded it for her album of the same name, and it became her first chart hit in four years and biggest since “The Morning After” in 1973 (which had the same formula of “Can You Read My Mind,” as McGovern wasn’t on the soundtrack but had the best-known version). This song peaked at #5 on Billboard’s Easy Listening (Adult Contemporary) chart as well.

America, “California Dreamin’,” #56, 4/21/79
Remake of The Mamas & The Papas hit, made specifically for what was supposed to be the summer 1978 movie California Dreaming, starring Glynnis O’Connor and Dennis Christopher. The film wound up getting bumped back to the spring of 1979 to avoid going against a bunch of other teen-oriented movies (probably not a bad idea; if you were a teen that year you probably saw Grease or Animal House), and the song got bumped with it. This was America’s first studio release as a duo, as Dan Peek had left the band in 1977 to start recording contemporary Christian music. Gerry Beckley and Dewey Bunnell continued on – and they’re still continuing today; they’ll be touring this summer.

Errol Sober, “Heart to Heart,” #65, 4/21/79
Sober had been around the music industry for years; both as a recording artist and in management positions (later in his career he became professional manager for CBS Music Publishing on the West Coast). This was his one and only chart hit on Number 1 Records (no modesty there), an Atlantic-distributed label. Written by classic songwriters Barry Mann and Cynthia Weil (“You’ve Lost That Lovin’ Feelin’,” “Somewhere Out There,” and many more) and produced by Mike Post, it had the background to be a hit, but it didn’t happen. Sober is now out of the music industry, and runs business development for Amy’s Kitchen, a natural foods company whose products can be found all over the country.  (I have no idea why Randy Travis’ mug shot shows up in the middle of the video, so don’t ask.)

Ian Matthews, “Give Me an Inch,” #67, 4/21/79Second and final chart hit from Matthews’ album Stealing Home, and considerably more comfortable to listen to than the teenybopper-obsessed “Shake It.” “Give Me an Inch” was originally written and recorded by Robert Palmer, appearing on his 1975 album Pressure Drop (don’t Google the cover at work). Matthews changed the spelling of his first name to Iain in the late 1980s, moved to Amsterdam, and still occasionally records and tours, either on his own, with a revised version of his band Matthews Southern Comfort, and once in a great while with Fairport Convention.

Badfinger, “Love Is Gonna Come at Last,” #69, 4/21/79
Not exactly the band you’d expect to get back together. After four top 20 US hits between 1970 and 1972 (and missing out on a huge hit when their song “Without You” was covered by Nilsson and hit #1), the remaining members of the band reunited three years after the death of founder and singer Pete Ham, who had hung himself in 1975, depressed over the band’s financial fates (they were involved with a crooked business manager). The new version (which for the purposes of this album were bassist Tom Evans, guitarist Joey Molland, and lots of studio musicians; drummer Mike Gibbins auditioned but was not invited back and new guitarist Joe Tansin quit after their first album was recorded) got a contract with Elektra Records, and released Airwaves, from which this song became the lead single.

Randy Brown, “You Says It All,” #72, 4/21/79
This is Randy Brown’s one chart single, on Parachute Records, one of many boutique labels under the Casablanca Records umbrella. Brown’s singing style reminds me a bit of The Temptations’ Dennis Edwards, and given Casablanca’s marketing strength at the time I’m surprised this didn’t hit bigger. Brown recorded five albums between 1978 and 1981: Welcome to My Room and Intimately (from which “You Says It All” was released) for Parachute, Midnight Desire and Randy on Chocolate Chip Records, another Casablanca subsidiary, and Check It Out on Stax Records. (And the grammar of “You Says It All” drives me nuts too, but it makes sense when you hear the song.)