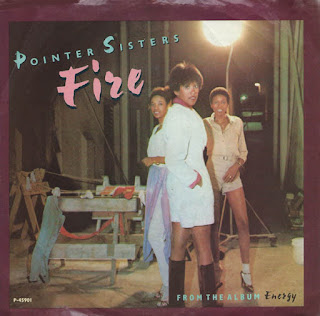 One big hit and a lot of misses this week.

The Pointer Sisters, “Fire,” #2, 2/24/79
Bruce Springsteen wrote this song with the idea that Elvis Presley would sing it; The King died before having the opportunity to hear the song. Springsteen then recorded it during the Darkness on the Edge of Town sessions, but didn’t include it in the final version of the album (it’s on the two-disc set The Promise, a 2010 release that included many unreleased songs from that era). Robert Gordon also recorded a version, but The Pointer Sisters made it a hit as the first single from their album Energy; it was also their first gold single and tied for their highest-charting record with “Slow Hand.” It’s probably just as well that the song became better known by a female recording act; it may sound like a woman indecisive about her romance with a man on the Pointers’ version, but sung by a man, it sounds more date rapey.

Santana, “Stormy,” #32, 2/24/79
Carlos Santana is one of the all-time great guitar players, but while he’s cowritten many Santana songs, my impression is he’s not a lyricist, so many of his songs are instrumentals. The one top 20 hit he had a hand in writing was 1999’s “Maria, Maria” (and there were four cowriters on that one). In the late 1970s, the band was trying to get out of its commercial rut; they stuck a remake of The Zombies’ “She’s Not There” on their half-live/half-studio set Moonflower and were rewarded with their first top 30 hit in six years. As a result, the subsequent studio LP Inner Secrets contained three remakes (well, three and a half if you count the “Dealer/Spanish Rose” medley, as the first song was originally recorded by Traffic); this one (originally done by The Classics IV) was the most successful of the singles.


Sylvester, “You Make Me Feel (Mighty Real),” #36, 2/24/79
Second single from Sylvester’s Step II album, and while this didn’t chart nearly as high as “Dance (Disco Heat)” had the previous year, it probably has had more impact over the years. Sylvester had a religious background (he had attended Pentacostal services regularly with his family before leaving home over his homosexuality), and this song definitely has a religious fervor. The song hit #1 on Billboard’s Disco chart in 1978 as a two-sided hit with “Dance (Disco Heat),” and it hit #1 on the Dance chart 20 years later, in a version by Byron Stingily. Jimmy Somerville, formerly of Bronski Beat and The Communards, had a #5 UK single with his version in 1990.

Melba Moore, “You Stepped Into My Life,” #47, 2/24/79Sometimes being multitalented means more opportunities to break through; sometimes it means only moderate success in a wide variety of areas. The latter probably applies to Moore, who despite 26 albums and 18 top 20 R&B hits, a fine Broadway career (original cast of Hair and a Tony award for Purlie), and two TV series, she has never really had the name recognition one might expect. This was her biggest pop hit, and not surprisingly it was a major disco hit as well, but it just missed the top 40. Moore still tours and records today.

Eric Carmen, “Baby, I Need Your Lovin’,” #62, 2/24/79
Second and final chart hit from Carmen’s third solo LP, Change of Heart; this is a remake of The Four Tops’ hit (although the most successful version was by Johnny Rivers). Carmen’s version doesn’t have anything to particularly recommend about it; it’s not a pumping disco remake, nor is it a rocker. I’m not familiar with the album, but the fact that it clocks in at less than 30 minutes is never a good sign – maybe there was some sort of label deadline or need to release it to coincide with a tour.

Stonebolt, “Love Struck,” #70, 2/24/79
Second and final chart hit by this pop/rock band from Vancouver, British Columbia. Their first chart single, “I Will Still Love You,” hit #29 in 1978, from the group’s eponymous LP. This appears to have been a planned leadoff single for a second album, but that album never appeared – the group’s label, Parachute Records, folded sometime later in the year. (Parachute was one of many Casablanca Records sublabels, along with Casablanca West, Chocolate City, Earmarc, Millennium, and Oasis.) The song would eventually appear on a 1980 RCA album, Keep It Alive.

Sarah Dash, “Sinner Man,” #71, 2/24/79
This is Dash’s one and only Hot 100 hit as a solo artist (she’d been part of Labelle until 1977, and Patti Labelle & The Bluebelles before that). All three members of Labelle could and did sing lead on various songs, so solo albums after the trio broke up made sense, but from what I’ve read, the material she got was fairly second rate. Dash also performed with Keith Richards on his solo albums and tour in the late 1980s, and has done several reunions with Labelle. She still performs on an irregular basis, mostly in and around New York City, where she makes her home. The video here is terrible, but it’s the only performance video available from the era (that’s Don Kirshner introducing her).


Parliament, “Aqua Boogie (A Psychoalphadiscobetabloaquadoloop),” #89, 2/24/79
Fifth and final chart hit for the band, which had a previous life as The Parliaments in the 1960s and hit with “(I Wanna) Testify.” They’d hit the top 20 in 1978 with the dance floor hit “Flash Light,” but this one was just too weird for mainstream tastes, I fear (especially given the subtitle was part of the song’s chorus). There was also dissention at the time among band members and leader George Clinton (two band members had left the group the previous year, three in 1977). This appears on the album Motor Booty Affair. Parliament and Funkadelic were sister acts in the 1970s, with the more science fiction-oriented Parliament recording on Casablanca Records.