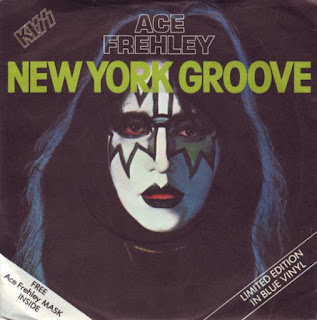 A much better week for Top 40 radio.
The Village People, “Y.M.C.A.,” #2, 2/3/79
This was the first megahit for the six-man vocal group (“Macho Man” had grazed the top 30 in 1978, but it was also ignored by a bunch of radio stations). Lead singer Victor Willis’ sly lyrics meant that more straight-laced (no pun intended) audiences would think it’s just a disco song saluting the Y as a place to work out and visit, while others understood that it could also be construed as a place for men to hook up with other men – which wasn’t exactly a common song subject in 1979. In any case, the song is totally mainstream today –baseball teams such as the Yankees play it between innings during games, with the grounds crew leading the fans in dance by forming the letters Y-M-C-A with their arms. To all my friends from St. Martin’s Press: the opening shot is from the McBurney Y on 23rd Street, just a few blocks west of the Flatiron Building.

Ace Frehley, “New York Groove,” #13, 2/3/79
Who would have thought Ace Frehley would have the biggest solo hit of the four Kiss members? I’m sure most people would have put their money on Gene Simmons or Paul Stanley. Anyway, the song was written by Russ Ballard (originally lead singer and guitarist for Argent; he later wrote the hits “You Can Do Magic” for America, “Winning” for Santana, and “I Know There’s Something Going On” for Frida), the song originally hit the top 10 in a couple of European countries for the one-shot band Hello. Frehley’s version has been in the Kiss setlist when he’s been with the band (the last time this occurred was last year, but Frehley and Simmons clearly aren’t buddies, given the accusation Frehley made this week that Simmons tried to grope his wife), and has become a standard at New York Giants and New York Mets home games.

Chanson, “Don’t Hold Back,” #21 2/3/79
Standard issue disco on the Ariola-America label. Chanson was totally a studio band, but its leader was bass player James Jamerson Jr., son of the famed Motown house band bassist. Jamerson Jr. played with Motown acts The Temptations, The Four Tops, and Teena Marie, along with Bob Dylan on his album Knocked Out Loaded. Jamerson Jr.’s father died young (age 47) due to cirrhosis of the liver; Jamerson Jr. passed away on March 23, 2016 at the age of 58, possibly due to complications from the spinal condition ankylosing spondylitis.

Gerry Rafferty, “Home and Dry,” #28, 2/3/79
Third and final American single from Rafferty’s platinum album City to City, celebrating the comforts of home, safety, and love (which, unfortunately, became ironic in light of Rafferty’s later dissolute years). Henry Spinetti, brother of actor Victor Spinetti, was the drummer on this track – he’s been Eric Clapton’s drummer on and off for decades (everything from the live Just One Night to the more recent I Still Do), as well as working with Bob Dylan, Joan Armatrading, George Harrison, and Paul McCartney.

The Rolling Stones, “Shattered,” #31, 2/3/79
This was also the third and final American single from a big album – in this case it was the Stones’ Some Girls. This one hardly addresses home, safety, and love, however – it’s about living in New York City in somewhat dire circumstances. It’s probably the closest Stones hit ever to punk rock, which makes it rather strange that the song wasn’t released as a single in the UK (“Respectable” got the nod there instead). The b-side of the single, “Everything Is Turning to Gold,” wasn’t on Some Girls – it’s only available on this single and the 1981 compilation disk Sucking in the Seventies (hey, that’s their title, not mine), which is long out of print – although it can be found on CD if you look.

Rose Royce, “Love Don’t Live Here Anymore,” #32, 2/3/79
Most people probably know this best from the Madonna remake for her Like a Virgin album, but this is the original – and it’s a good one. Give credit to the band for mixing it up – rather than releasing another disco song when the market was already oversaturated, they put out a ballad, one that still gets occasional airplay today. It’s also the last Hot 100 hit for Rose Royce (better known for the #1 hit “Car Wash,” but they did make the chart six times in all) as well as the last top 40 pop hit for their producer (and label owner) Norman Whitfield (who’d worked at Motown with The Temptations, Marvin Gaye, Gladys Knight & The Pips, and several others). Rose Royce stills tours occasionally with a few of the original members, and lead singer Gwen Dickey tours solo as well.

The J. Geils Band, “One Last Kiss,” #35, 2/3/79
Another good song that got lost in the rush to disco, but it was the band’s highest-charting hit since 1974’s “Must of Got Lost” [sic]. It was also their first single for EMI America, after seven studio albums on Atlantic. A plaintive breakup song; it probably rung true for a lot of listeners. Unfortunately, EMI America decided to release the album right before the Christmas season, and the album and single didn’t really get the attention they deserved (although the album eventually did reach gold status).

Exile, “You Thrill Me,” #40, 2/3/79
Second chart hit off their breakthrough album Mixed Emotions – admittedly, however, the first single “Kiss You All Over” made more of an impact. There are influences here from their future career in country, but Exile has bits and pieces from lots of different genres (they started out as a pop/rock band, The Exiles, back in 1968). Like their previous hit, this was produced by Mike Chapman and co-written by Chapman and Nicky Chinn. Chapman had a gigantic year in 1979; he produced or wrote huge hits for Blondie, The Knack, and Suzi Quatro – as well as another Exile album, which came out a few months later.


When two different acts release a song at the same time, somebody’s going to end up the loser in the chart battle – and in this case it was the band whose lead singer actually wrote the song. The Faith Band, from Indianapolis, had been around awhile, having previously been known as The Chosen Few and The Limousine Band. The song came from their third album, Rock’n Romance – which brings up a side note: don’t release albums with cutesy use of an apostrophe in the title that are hard to Google. (I’m not even sure whether this should really be Rocking Romance or Rock and Romance.) Lead singer Carl Storie wrote the song, but the single was released at nearly the same time Nigel Olsson put his version out – and since Olsson was Elton John’s ex-drummer, his had the bigger buzz. I loved this song at the time, thinking it was a perfect end-of-the-dance party song (and it got an awful lot of airplay on the normally AOR-oriented Rock of North Jersey, WDHA), but now it’s just another drippy ballad – and there are better ballads on that album anyway. (Rock’n Romance is available for download on iTunes, but while all the other songs on the album there are the originals, the version of “Dancin’ Shoes” there is a rerecording.) If you want to skip the spiel on the video that repeats most of what I’ve written here, jump to the 0:43 mark.


Married couple – he came from Wales, she was born in England but grew up in Ontario, Canada – who met back in England but their recording career was based back in Canada. Confusing. Anyway, three of their songs did make the top 20 according to CHUM (that was the biggest Top 40 station in Toronto at the time). Cherrill Rae’s Canadian background may have helped – Canadian broadcast rules state what’s aired on their stations has to have a certain amount of Canadian content. This was their only chart record in the states – the act (and the marriage) ended a couple of years later. Robbie Rae died in Thailand in 2006; Cherrill Rae still performs on occasion. This is another video where the opening appears to have nothing to do with the song; it look like it was grafted from a PSA.

K.C. & The Sunshine Band, “Who Do Ya Love,” #68, 2/3/79
Another miss from the second phrase of their career – the one where nothing made top 30 for over two years. This was the second single from the album of the same name, and while the music was the same, the lyrics were missing the slightly risqué content of past hits such as “(Shake Shake Shake) Shake Your Booty,” “That’s the Way I Like It,” and “Keep It Comin’ Love.” It’s also possible the deluge of disco product may have shoved KC & The Sunshine Band to the sidelines, and do remember TK Records was a pretty small independent label out of Miami.

Tanya Tucker, “Not Fade Away,” #70, 2/3/79
By the time Tucker released her album TNT in November 1978, she’d already racked up twelve top 10 hits on the country charts – “Delta Dawn,” her first, was released when she was just 13. Bu at age 20, she wanted to move more toward rock – and this song, a remake of the old Buddy Holly hit (good move; The Buddy Holly Story biopic had been a solid hit a few months before). It didn’t quite make it – in fact, this would be her last hit on the pop charts. Tucker struggled personally for a few years as well, getting involved with Glen Campbell (who was twice her age, and like her, struggling with addiction issues). But she got clean in the 1980s, and has added another 28 top 10 country hits to her credit. She’s still touring at age 60 – actually, she’s performing in Texas later this week. The video truncates the song, but it’s from Dick Clark’s New Year’s Rockin’ Eve 1979, so that seems a fair tradeoff.

Aerosmith, “Chip Away the Stone,” #77, 2/3/79
And speaking of addiction issues… well, Aerosmith was loaded with them by this point. This single is interesting – the A side wasn’t released on a studio album, but the B side included a live version from their double live album Live! Bootleg. In any case, it wasn’t a gigantic hit, but it’s made it to a few of their compilation albums (Greatest Hits 1973-1988, Gems, Pandora’s Box), and still gets a fair amount of radio airplay on classic rock stations.