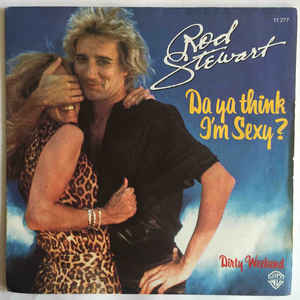 Kind of a fun week.

Rod Stewart, “Da Ya Think I’m Sexy,” #1, 2/10/79
Ah, 1979. One of the last years you could have sex with someone you’d met just a few hours before, and not have the slightest worries about syphilis or gonorrhea (antibiotics), AIDS (not for another few years), or ethical quandaries. (Not that I would have any firsthand knowledge of this.) In any case, this fairly hedonistic look at the pickup scene, with disco overtones, became one of Rod Stewart’s biggest hits (although it trails both “Maggie May” and “Tonight’s the Night”), but also his last #1. And he definitely suffered a backlash among rock radio stations (really, do you remember any AOR stations playing “Love Touch” or “Tonight I’m Yours”?). Dated Lyric: “Give me a dime/so I can phone my mother.”


Hot Chocolate, “Every 1’s a Winner,” #6, 2/10/79
The title makes it sound like a self-improvement anthem, but the song is really along the same lines of “You Sexy Thing” (although, unlike “Da Ya Think I’m Sexy,” the couple here cerrtainly sounds more monogamous). This was the third and final top 10 hit in the United States for the British soul band (they had 37 chart hits on the British charts, starting in 1970 and running through the 1990s), and this one fit in spectacularly with the disco era.

Earth, Wind, and Fire, “September,” #8, 2/10/79
Now we’re talking. This was released only on The Best of Earth, Wind, and Fire Volume 1 (it’s been on other anthologies since then), and became their fifth top 10 pop hit, sixth R&B #1, and first top 10 on the British charts. It also may be one of their longest-lasting hits – any DJ who plays this at a party will get people on the dance floor. It was actually recorded during the sessions for their 1979 LP I Am, but was released well in advance of that album. Written by group leader Maurice White, guitarist Al McKay, and lyricist Allee Willis, who’s written for everything from The Color Purple soundtrack to “I’ll Be There for You” (the Friends theme).

Talking Heads, “Take Me to the River,” #26, 2/10/79
This was originally written (along with Teenie Hodges) and recorded by R&B star Al Green, and released in 1974 on his album Al Green Explores Your Mind. The Talking Heads covered the song for their second album, More Songs About Buildings and Food, and were rewarded with their first Top 40 hit. It’s definitely funky, and a good indication of where the band was going (although they wouldn’t have another Top 40 hit until 1983’s “Burning Down the House”). In the liner notes for the band’s greatest hits set Sand in the Vaseline, David Byrne wrote: “Coincidence or conspiracy? There were at least four cover versions of this song out at the same time: Foghat, Bryan Ferry, Levon Helm, and us.” Which isn’t precisely true, as Foghat’s version came out in 1976, but it’s an interesting footnote. This video was recorded for the film Stop Making Sense, and it’s pretty different than the studio version.

Styx, “Sing for the Day,” #41, 2/10/79
I’m not a big Styx fan at all, but this is one of my favorite songs of theirs, mainly because it flips around the borderline contempt bands of the era seemed to have for their female fans and groupies (Lynyrd Skynyrd’s “What’s Your Name,” Kiss’ “Christine Sixteen” and “Plaster Caster,” Grand Funk Railroad’s “We’re an American Band,” and several others). Referring to the band’s female fans as a single person with an actual name (Hannah), Tommy Shaw sings their praises (“Hannah, I need you as much as you think you need me”). It’s a little cryptic at times, but certainly treats the band’s fans with respect. Shaw later named his only daughter Hannah. Sorry about the video quality here; there aren’t a lot of good, representative videos of this one around.

Marshall Hain, “Dancing in the City,” #43, 2/10/79
Another disco-era “Dancing” song that isn’t a disco dance song. And Marshall Hain wasn’t one person – it was keyboard player Julian Marshall and bass player/singer Kit Hain. This was a huge hit in the summer of 1978 in the United Kingdom, but didn’t do nearly as well in the States, and the duo broke up later in the year. Hain would record two solo albums and write songs for several acts, including Aimee Mann, Cher, Heart, Fleetwood Mac, and Roger Daltrey. Marshall would continue to perform, finding success the following year with The Flying Lizards, and a few years after that with Eye to Eye.

Bonnie Pointer, “Free Me From My Freedom,” #58, 2/10/79
This was Bonnie Pointer’s first solo release after splitting from The Pointer Sisters the previous year (up until that point, they had been a quartet – Bonnie thus missed out on all their major hits from “Fire” onward). The point of “Free Me From My Freedom” is that the protagonist is telling her ex-lover she made a mistake in yearning to be single, and wanted him back – which was made clear to icky extremes in the disco version of the song, where she sings “Tie me to a tree, handcuff me” over and over. Produced by Pointer’s then-husband Jeffrey Bowen, who had previously produced several albums for The Temptations.

Diana Ross, Marvin Gaye, Smokey Robinson, and Stevie Wonder, “Pops, We Love You (A Tribute to Father),” #59, 2/10/79
With all this superstar talent on one record, you’d think this would be a much better song (and better known today). This song was written after the death of Berry Gordy Sr. (not the guy who started Motown Records; Sr. was his father) in 1978, and beloved by all (Gaye, who definitely had a love-hate relationship with Gordy Jr., was talked out of suicide by Sr.). Songwriters Pam Sawyer and Marilyn McLeod have written good songs (Ross’ “Love Hangover,” High Inergy’s “You Can’t Turn Me Off [In the Middle of Turning Me On]” ), but unfortunately this reads like a laundry list of Gordy Sr. attributes, with a minimal melody line – and despite having three great songwriters on the record in Gaye, Robinson, and Wonder, they didn’t contribute anything to this one. The Pops, We Love You album and this song are still available for download, but I’ve never heard this on the radio. This one definitely would have benefitted from a video, but either it didn’t occur to anyone or they couldn’t get all four together at the same time.

Kansas, “Lonely Wind,” #60, 2/10/79
Culled from the band’s double live album Two for the Show (get it?), this song originally appeared on the band’s self-titled debut from 1974. Piano and keyboard player Steve Walsh wrote and sang this one, but Kerry Livgren plays the piano intro on the song (which was edited considerably for the single release). Two for the Show, a platinum album in its original release, was reissued in 2008, having been expanded to nearly two and a half hours (Three for the Show?). The instrumental lead-in on this video seems endless; the acoustic guitar to start is from the previous track on the album, “Dust in the Wind,” then the aforementioned piano part.

Shalamar, “Take That to the Bank,” #79, 2/10/79
Second chart single for the trio, which had an ever-changing lineup (there have been nine different people who have been in Shalamar overall, none from the start to the current group). The first, “Uptown Festival (Part I),” hit #25 in 1977; this is possibly a better song (although nowhere near as good as 1980’s “The Second Time Around”), but might have lost ground on the pop chart due to the piles of disco and R&B releases around that time. “Take That to the Bank” did his #11 on Billboard’s Soul chart, and made it to #20 in the United Kingdom. Jody Watley, the group’s best-known member, was on this recording.

London Symphony Orchestra, “Theme From Superman (Main Title),” #81, 2/10/79
Theme song to the first Christopher Reeve movie, which had premiered the previous December. Not surprisingly, it sounds a whole lot like the Star Wars theme. Also not surprisingly, lightning did not strike twice; this did not become a top ten hit like the LSO’s Star Wars theme did. I’ve read in a couple of places the single release actually had more of a disco backbeat, but I can’t find any concrete evidence (or version) of that. First of three Billboard Hot 100 songs that year with Superman in the title.

Cat Stevens, “Bad Brakes,” #83, 2/10/79
Fourteenth and final American chart hit for Stevens (birth name Steven Demetre Georgiou), who had converted from Christianity to the Muslim faith in late 1977. He had changed his name to Yusef Islam in 1978 (which he still goes by today), and declared his disenchantment with the music industry – but since he still owed A&M Records an additional album, he recorded Back to Earth late that year. Islam started making a gradual return to the music industry in the 2000s, and released The Laughing Apple, credited to Cat Stevens/Yusef, in 2017.

10cc, “For You and I,” #85, 2/10/79
Ninth and last American chart single for the band, which had become a duo after founding members Lol Creme and Kevin Godley had departed in 1976. (Of their two big hits, “I’m Not in Love” was recorded with Godley and Creme, “The Things We Do for Love” without them.) Of the two remaining members, Eric Stewart was in a serious automobile accident in January 1979 and was out of action altogether for six months, with a long, slow recovery afterward. Graham Gouldman worked solo without him (recording soundtracks for two flop films, Sunburn and Animalympics), but the momentum the band had in the United Kingdom – five consecutive top ten albums over there, along with nine consecutive top ten singles (although “For You and I” wasn’t released as a single in the UK) never really came back.

Tasha Thomas, “Shoot Me (With Your Love),” #91, 2/10/79
Thomas first made her mark on Broadway playing the Auntie Em role opposite Stephanie Mills’ Dorothy in the original version of The Wiz. Originally recorded for minor label Orbit Records, “Shoot Me (With Your Love)” got enough club attention for a full Thomas LP, which was recorded and released by Atlantic (and is still available for download today). This would be Thomas’ only album, however, and she would die of breast cancer November 8, 1984, still in her 30s (sources vary as to her birth date).

Posted by Curt Alliaume at 9:27 AM