A Song of Recovery

I’m not quite sure what it is about artists, but they share a behavioral pattern with folks who work in the restaurant / hospitality business, in that a significant amount of them have or have had serious substance abuse issues.

The odds for long-term survival for alcoholics and addicts are slim; it’s estimated that recovery efforts (be they inpatient rehab, intensive outpatient treatment, twelve-step work, quitting cold-turkey, other methods, or some combination thereof) succeed at a rate of roughly ten percent.  But when someone can overcome their demons, there can be some genuine beauty: The late Lou Reed, for example, or Chris Cornell’s still-magnificent voice.

One such case is Nick Cave, who told me last year that he had “tried everything at least twice, and I liked most of it.” His preferred escape methods were heroin and alcohol, but after several – more than a dozen, in fact – cycles of abuse < rehab < relapse < abuse < rehab < relapse, he finally got sober for good in early 2000, coinciding with the birth of his twin sons. The album he and his band, the Bad Seeds, released the following year, is filled with songs pertaining to his new outlook on life as well, but there are a few nuggets that speak specifically to his recovery from addiction, and it’s one of those that I’m writing about today.

“Hallelujah” is, thankfully, not yet another John Cale-inspired cover of Leonard Cohen’s classic. Rather, it’s a song about having a lapse, but stopping it before it becomes a relapse.

A counselor once explained to me the difference between the two: A lapse is essentially akin to veering off the road a little bit – you go onto the shoulder on the highway, but quickly correct your course. A relapse is like going into the ditch. For an addict, lapses are common, but it’s incumbent upon us to prevent those bad thoughts – those lapses – from getting worse and putting ourselves into a ditch. And that’s exactly what Nick Cave sings about in “Hallelujah.”

The narrator – Cave himself, almost assuredly – speaks about finding himself in a rut, with his typewriter “mute as a tomb,” and his “nurse” – his sobriety – having been given the weekend off. It’s a common situation for people in early recovery; we have a period of sobriety and then start to think we can relax a little bit. This is reflected in Warren Ellis’ omnipresent violin melody, which runs through essentially the entire song; the early repetition depicts the monotony and banality that the narrator feels, longing for something he used to have. And so the narrator goes on a walk, alone, without a coat, something his “nurse would not have allowed.” Essentially, he has forgotten the “we” part of recovery, or is at least choosing to ignore it, and starting to think it’s a “me” process, hence his pajamas clinging to him like a shroud. An early indicator of a potential relapse, after all, is isolation of self and rejection of socialization and assistance.

And then the temptation, the lure of a return to substance use, rears its head with all the subtlety of a cobra preparing to strike:

There rose before me a little house
With all hope and dreams kept within
A woman's voice close to my ear
Said, "Why don't you come in here?
You looked soaked to the skin."

Let’s call a spade a spade: When you’ve spent years using a substance, be it alcohol, heroin, cocaine, Diet Coke, whatever, and then you have to give it up and live life without it … it SUCKS. If it were easy, the success rate I mentioned earlier would be far higher than ten percent. And so, the temptation to go back to your drug of choice is ever-present. It’s so incredibly easy to give into that temptation. And the narrator seriously ponders it, despite knowing in the back of his head that it’s wrong…

Generally speaking, this is called a “crisis” moment in relapse prevention. As an analogy, a recovering alcoholic is standing at the front door of a liquor store, or an addict hasn’t just found the dope man’s number, but has a thumb hovering just over the “dial” button. The odds of preventing a relapse at this point are … well, not good. That being said, not everything is lost. Whether it’s calling a sponsor or another support network member, having the willpower to let the craving pass, what have you, it can happen. And our narrator – again, Cave himself – illustrates that.

Now, you might think it wise to risk it all
Throw caution to the reckless wind
But with her hot cocoa and her medication
My nurse had been my one salvation
So I turned back home

And so the lapse has been stopped, corrected, attended to, before it became a relapse.

It's not over, of course, as the song ends with a haunting refrain:

This is one of the most essential components of relapse prevention: The acknowledgment of pain and past wrongs is an essential part of recovery. We can't ignore what we've done ... but we can't wallow in it, either. It's fine to remember the past and to cry about it and to contemplate upon it -- as Captain Kirk said, "I don't want my pain taken away, I need my pain!" But we can't dwell upon it.

Addiction is a disease of mind, body and soul, and it takes serious, legitimate, long-term work to address it. But as Nick Cave wrote in “Hallelujah,” the temptation is and always will be present, especially when one starts to get lax or complacent – thinking “I’ve got this,” or “I know what I’m doing.” Down that road lies danger … but just because you start down that road, or veer towards the shoulder a bit, it doesn't mean you are definitely or conclusively going to keep going down that road.
Posted by Unknown at 12:37 PM 1 comment:

Doomed to Repeat: Songs About History and Historical Figures

One More One More Day

Progress on "One More Day to Rain" continues, with the introduction of Morgan Henry's fabulous lick (i.e. the very heart of the song).  This is bare bones, remember -- the vocals are dry, and we haven't added effects and other guitar parts. But the frame of this particular room of the house is up and looks pretty good.

One More Day to Rain 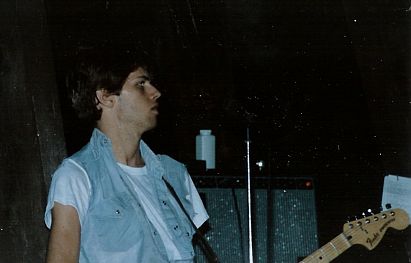 1974  Harry Ailster, the flamboyant, mercurial music teacher of my fourth grade class, calls on me to answer a question. I look up, gape-mouthed, as I have not been paying the least bit attention. "He's reading Bugs Bunny," a classmate informs Harry, pointing at the book I am trying to hide under my desk. "I'll bugs HIS bunny!" Harry roars, and snatches the book from my hand.

1978  Harry makes each pupil learn and perform for the class a verse from an old folk song. I get up and sing my verse of "Joe Turner." Harry gives me an A and informs me I will be performing in the upcoming 8th grade musical, The Truth About Cinderella.


1980  On a gray, cheerless Monday in January, my mother has become alarmed enough by my reclusive, semi-destructive state of mind to hustle me off to a family therapist. The therapy center is in a large converted house, drafty and cold. I am sitting in the waiting room, embarrassed and uncomfortable. I try to boost my spirits by looking forward to the end of the week, Friday, January 18, when I will be taking my first guitar lesson. In retrospect it is abundantly clear which appointment did me the most good.


July-August 1980 I spend the summer mostly with my only real friend, John Krause. We take frequent bike rides and bus rides to the library, where we borrow books and records to feed our new fascination with John Lennon. Krause is especially interested in Plastic Ono Band because it has a lot of strong piano parts. We get sheet music and learn the songs, practicing and performing them together at the Presbyterian Church, which has permitted John to borrow its magnificent grand piano.

September 1980  It is announced that John Lennon and Yoko Ono are returning to public life with a brand new album, Double Fantasy. 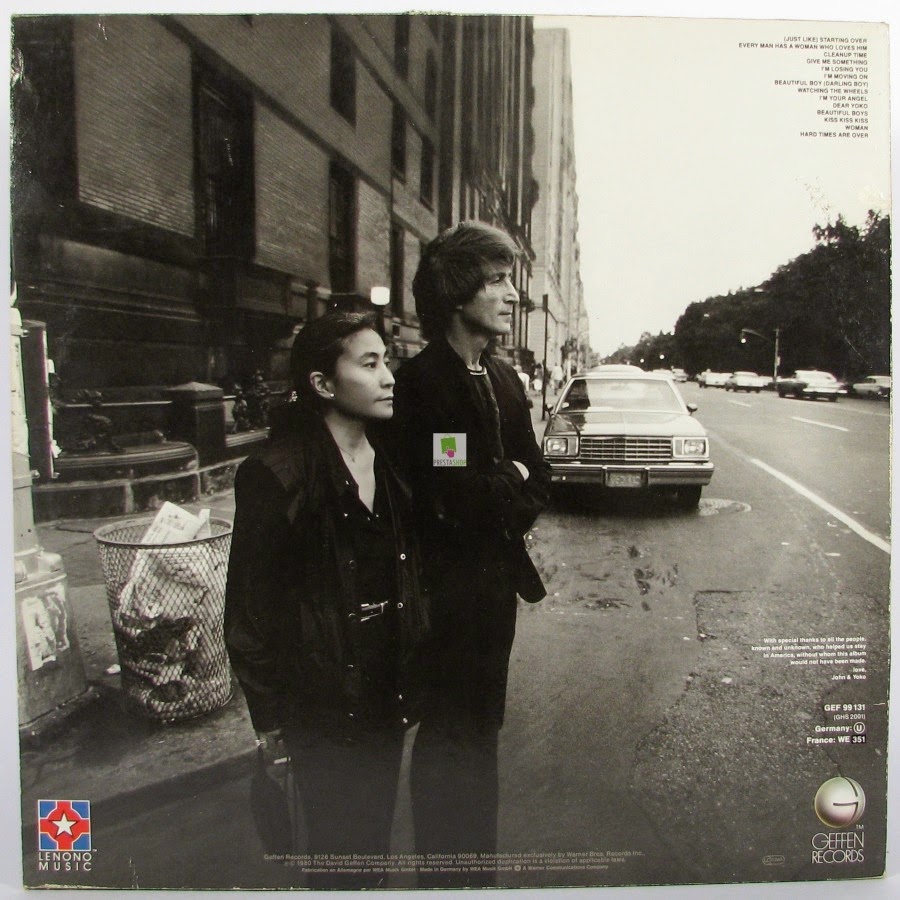 May 1982 I join the New Providence High School Folk Club.

May 1982  By the time of the New Providence High School Folk Club Concert, I had joined and performed with my first band, PinPoint (later the Hot Rods, among other names), a 50s-rockabilly quartet. But on this occasion I am playing with Kazumi Umeda, a superb classical pianist, and Steve Muller, a gifted bass player, and we had put together a set of John Lennon songs to perform at the concert. At this point I had suffered a lot of ridicule for having been so expressive about my grief over Lennon's death (such as carrying one of his albums around the halls in a daze the day after), and it had gotten so bad that kids would yell out "Lennon!" when I passed through the halls. I didn't care. Well, I sort of cared. On this, my first and last public appearance in front of my high school peers as an audience, I am greeted onstage by catcalls and mocking. The huge, stupid bully who had beat me up regularly a few years before yells out mockingly "LENNON". I quaver, a little.

Kazumi sits down at the piano and starts a gentle, perfect rendition of "Imagine". Amid hoots and whoops I start to sing. Seconds later, dead silence from the audience ensues. During the next two songs, "God" and another I can't recall, you can hear a pin drop. The applause that follows our performance is loud, and it stays with me and sustains me through a lot of years.

[EDIT: Kazumi tells me the third song was probably "Jealous Guy". I am certain he is correct.]

Dad, Get Me Out of This: Songs About Crime and Wrongdoin' 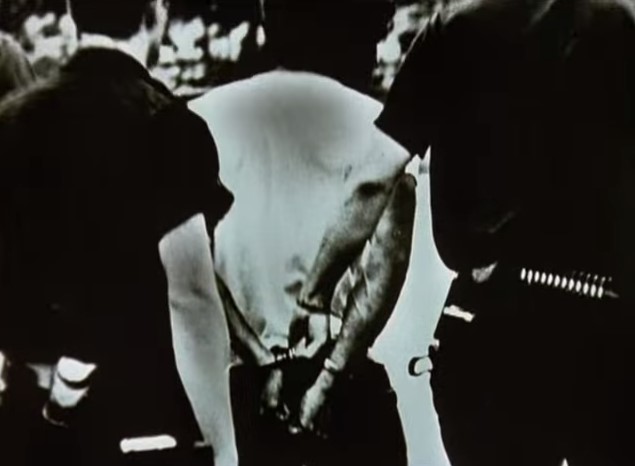 Always Something There: 80s Hits That Were Covers