Here's a variety of performers covering songs by one composer. Listen to the songs, then see if you can guess the originator, without peeking.

My Turn to Bitch: The Life and Times of Roy Edroso

If the questions seem a bit abrupt and truncated, it's because time concerns forced us to conduct the interview via email, rather than in person. But the answers themselves were splendid and revealing, as you'll see. Interview starts after the jump.

The invasion of Iraq in 2003 launched a surge of patriotism in the United States the likes of which hadn’t been seen since perhaps World War II, and the internet played an unprecedented part in the discourse of the day. Leading the charge was a group of would-be pundits and writers who called themselves “warbloggers”, using their spaces on the web to cheer on every step of the invasion and nearly every decision and strategy committed by the Bush administration. But a small contingent of skeptical, left-leaning bloggers soon emerged and began challenging the government’s version of the truth about Iraq, decrying its financial and human cost. Unique among these bloggers was Roy Edroso, a New York-based writer who began to hold forth noisily on his site alicublog. His near-daily delivery of wry observations and wicked wit gained him a loyal audience and earned him the respect of his blogging peers on the Left, most of whom had have greater visibility and prominence but possess far less passion, intelligence and well-aimed outrage.

Edroso is a superb writer with a muckraker’s sense of justice and a Marx Brother’s sense of humor. In addition to his blog, every Monday he posts a column at the Village Voice entitled Exploring the Right Wing Blogosphere, which features our hero throwing spitballs from the back of the room at hapless, outraged 'rightbloggers'. A website collecting his various work can be found at edroso.com.

In addition to his writing career, Roy spent several years on the New York City music scene, writing and performing in bands such as the Shaved Pigs, Lancaster County Prison, the Rosicrucians, and most notably, the legendary Reverb Motherfuckers.

He now lives in Washington, DC with his wife and two dogs, and is a first-rate drinking and moviegoing companion.


Where were you born, and where did you grow up?


I was born and raised in Bridgeport, Connecticut.

(more after the jump)

Posted by John E. Williams at 8:40 AM No comments:

No, I'm not gonna forget The Blasters.  Still one of my favorite bands

Love this band.  some southwest pickin'

you can't have a rockabilly week without something from Sun Studio

From Scotland.  Yup, I got the album

The Tailgators did a great high speed version of this song 'Tore Up'.  I got it on vinyl, but need it on my iPod.

Wanda's counterpart.
Posted by John E. Williams at 7:33 AM No comments:

In a better world, Wanda Jackson would be as much a household name as Elvis Presley.
Posted by John E. Williams at 8:58 PM No comments:

Rockabilly Week: Stomping on the Cat

One of my favorite quirky New wave bands of the late 70's (and I have many) is The Fabulous Poodles.  Here is the master Poodle, Tony De Meur (aka Ronnie Golden these days) doing his Buddy Holly impersonation with a FP original.
https://www.facebook.com/groups/77376925614/

Those of you who don't recognize the impressions are missing out.
Posted by John E. Williams at 10:18 AM No comments:

Posted by John E. Williams at 7:42 AM No comments:

"He ran into Gene Vincent at Penn Station the following morning as they were leaving the city. One of the boys pointed the new rock 'n' roll star out to him, and Elvis walked over and introduced himself, congratulating him sincerely on the success of "Be Bop A Lula". To his surprise Vincent immediately started to apologize. '"The first thing he said was, "I wasn't trying to copy you. I wasn't trying to sound like you.' Just right off the bat, without being asked. I told him, 'Oh, I know that. It's just your natural style.'" And then the two twenty-one-year-olds compared notes on success."
- Last Train to Memphis: The Rise of Elvis Presley, Peter Guralnick, 1994

"Battle of Jericho"
Posted by John E. Williams at 6:31 PM No comments:

Posted by John E. Williams at 3:35 PM No comments:

Hey kids, sorry I was gone for a bit. But now I'm back, just in time to kick off ROCKABILLY WEEK!

Today would have been Roy Orbison's 77th birthday. 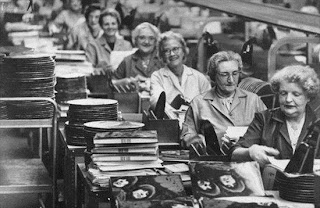 1. That all of these old ladies are probably dead.

2. That one can endlessly speculate on what they thought about as they assembled these copies of RUBBER SOUL.

3. That it's quite possible [in a chrono-anal-retentive variation of the butterfly effect] that, in looking up from their work to smile for the camera, Marjorie and Judith [third and fourth from the front, respectively] damaged the copies they were putting together, thus sending those lost RUBBER SOULs out into the world with no chance of ever being Mint condition.

[Majorie's copy currently resides in a flea-market vendor's garage -- grossly overpriced but nowhere near the $500 a mint copy of RS can command -- telling the copies of WHIPPED CREAM AND OTHER DELIGHTS that sandwich it that it coulda been a contendah if not for this photo.]

4. That their jackets are all completely different, yet they're all double-breasted; however, I have no humorous parenthetical comment to make about this.