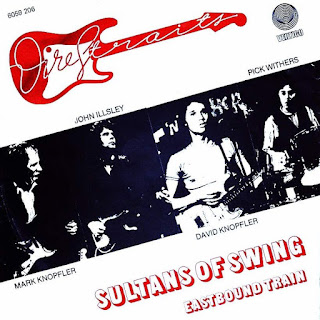 One great debut, some pretty good disco, and some really bad disco.

Dire Straits, “Sultans of Swing,” #4, 4/7/79
It took awhile for this song to hit in the United States – actually, it took Dire Straits a few years to get going at all. Mark Knopfler was teaching by day, living at his brother David’s flat in London following a divorce, and started performing with him and flat mate John Illsley. Adding Pick Withers to the band, they recorded a demo tape and attracted the notice of BBC Radio personality Charlie Gillett, especially with this song – which Mark Knopfler wrote after hearing a band with the same name in a London pub. They were eventually signed to Vertigo Records, with their first album produced by Steve Winwood’s older brother Muff. This single hit first in the United Kingdom, then in a bigger way in the United States at the end of 1978 – which led to its rerelease in the UK. It eventually became a top 10 hit in five different countries.

Little River Band, “Lady,” #10, 4/7/79
Second top ten hit for Little River Band off their 1978 album Sleeper Catcher. (Wikipedia notes the album shows band members playing the Australian game Two-up; the “sleeper catcher” retrieves bets left behind by a late gambler in the game. Stump your friends!) Anyway, this one is a ballad, vaguely about either reuniting with an old lover or taking up with a new one. Also, this will serve as my regular reminder that of the six band members who performed on this song, exactly none of them tour with the group that now bills themselves as Little River Band. Buyer beware.

Anne Murray, “I Just Fall in Love Again,” #12, 4/7/79
I’m not exactly sure why, but Murray somehow chalked up more U.S. top 30 hits in the 18 months between September 1978 and March 1980 than she’d had in the previous eight years on Capitol Records. (Maybe somebody in their marketing department decided to work harder for her.) She’d always done well in her native Canada (21 Canadian Country #1s, 24 Canadian adult contemporary #1s), but her hits in the States were far fewer (and mostly remakes of other artists’ songs). Anyway, this song (originally recorded by The Carpenters) hit #1 Canadian pop, AC, and country, and #1 US AC and country was well.

Eddie Money, “Maybe I’m a Fool,” #22, 4/7/79
Another rock & roller who got tagged with the disco label. This song was given some disco string arrangements, which probably helped it on the charts (the song’s #22 peak matched that of 1978’s “Two Tickets to Paradise”), but likely hurt Eddie Money’s rock credibility – he wouldn’t have another top 40 pop hit until 1982’s “Think I’m in Love,” which was also his first song to hit Billboard’s Mainstream Rock Chart (which was established late in 1979). Money would tour in 1979 with Pat Benatar as his opening act (her debut album would be released late in the year).


I don’t know how comfy radio stations were in 1979 playing a song by an eighteen-year-old woman with the opening lyrics “I don’t know if it’s right/to let you make love to me tonight.” The song still did pretty well – it was a top 10 soul hit and went top 20 in Canada – but considering she’d been promoted as having been 16 when she started recording, that might have been just a little too close to the edge of illegal for some programmers. (I guess that’s why I never heard it on WABC or WNBC in New York.) This is from her album Smooth Talk, on RCA Records.  EDIT:  Apparently WABC did play the song (at least outside of morning drive) during a brief change from top 40 to all disco; here’s a playlist from around that time.

Chuck Brown & The Soul Searchers, “Bustin’ Loose Part 1,” #34, 4/7/79
Chuck Brown was a Washington, D.C.-based guitarist and singer who’s credited as being the “godfather of go-go music,” a subgenre of funk. (Other acts/bands in the genre: Trouble Funk, E.U., and several acts who were also considered hip-hop.) Brown was raised in Washington, and spent eight years in prison on an assault charge that was later moved to murder when the victim died. He started playing guitar while imprisoned, and started performing after his release. He had 11 songs on the soul charts between 1972 and 2010, but this was his only crossover hit – and it’s been adopted by the Washington Nationals as a victory song. Brown died in Washington, D.C. in 2012 of multiple organ failure at the age of 75.

The Blues Brothers, “Rubber Biscuit,” #37, 4/7/79
Sometimes labels pick the wrong song as the single. Yeah, I know “Rubber Biscuit” was getting tons of airplay on some stations, but it’s really a novelty song more worthy of Dr. Demento’s shows than top 40 – and while John Belushi was a pretty decent singer, Dan Aykroyd is not. Atlantic would have been better off releasing a single featuring Belushi and (more importantly) the band (they did release a third single from Briefcase Full of Blues, the far superior “’B’ Movie Box Car Blues,” but it didn’t chart); this did neither. The original version of “Rubber Biscuit” was done in 1956 by a doo-wop group called The Chips; their version didn’t chart.

Voyage, “Souvenirs,” #41, 4/7/79
French disco group (they later morphed into a funk act) that had more success in the United States than their native country, even though this is their only pop chart hit. Actually, the lead vocalist on this one was British singer Sylvia Mason-James, although the three of the four band members also sang. This comes from their second album, Fly Away, which was released in the United States on Marlin Records, a subsidiary of T.K. Records. Most of the musicians in the band have continued to work with other French acts. As for the song: it’s standard disco, but it gets the job done.

The Beach Boys, “Here Comes the Night,” #44, 4/7/79
On the other hand, some moves to disco were bad to begin with, and the execution was even worse. “Here Comes the Night” was originally recorded and released on the 1967 Beach Boys album Wild Honey, and in early 1979, Bruce Johnston and producer Curt Becher decided to make it trendier for their first release on Caribou/Columbia Records, L.A. (Light Album). The result is a10-minute electronic monstrosity on the album version; with Johnston, Mike Love, Carl Wilson, and Al Jardine occasionally harmonizing (Brian and Dennis Wilson didn’t participate on this recording; actually, Brian only worked on three of the album’s songs). Obviously it didn’t chart very high here (mercifully cut to 4:34 for the regular single release; it's even shorter in this video), or on the disco charts (#48), and despite the audience going nuts for the song in the video, apparently it was dropped from the live set after adverse fan reaction. I’m embarrassed to say I have the disco single (in a completely different mix from the album version), I plead 16-year-old insanity).

The Marc Tanner Band, “Elena,” #45, 4/7/79
Standard-issue pop rocker from Tanner; this was his one and only chart hit under his own name. The “band” was primarily studio cats and musicians moonlighting from other bands at this point, despite what you see in the video – according to Discogs, the backing singers included Mike Finnigan and Rosemary Butler, with Gary Mallaber on drums, Bob Glaub on bass, Jay Graydon playing guitar, and David Paich on keyboards. This came from Tanner’s first album, No Escape; by the time of his second album, Temptation, he’d formed a proper band, but that album went nowhere. Tanner has spent most of his career since then writing and producing, working with acts from Madonna, Snoop Dogg, and U2 to The Calling. He now works as a music and media consultant.

T-Connection, “At Midnight,” #56, 4/7/79
More disco courtesy of T.K. Records. This came from T-Connection’s self-titled third album; their first album, Magic, contained their biggest hit, “Do What You Wanna Do,” which made it to #46 in 1977. Give this group, which started in Nassau, The Bahamas, with sticking to it; they released eight albums in the United States between 1977 and 1984 on T.K. and Capitol; they charted eight times on Billboard’s R&B chart (their best there was 1981’s “Everything Is Cool”). It looks like they broke up sometime after 1984.

The J. Geils Band, “Take It Back,” #67, 4/7/79
Not-bad second single from their first album on EMI-America; I would have gone with “Jus’ Can’t Stop Me” (which is even better on the live album Showtime!), but EMI-America didn’t think to ask high school students what to do about the band’s career. Lead singer Peter Wolf was probably just as well known for his marriage to actress Faye Dunaway at this point as he was for his work with the band (the two were married in 1974, separated in 1978, and divorced in 1979); fortunately Wolf seems to still be on friendly terms, although he has never remarried.

Alicia Bridges, “Body Heat,” #86, 4/7/79
Second and final chart single for Bridges, whose 1978 hit “I Love the Nightlife” took almost everybody by surprise. “Body Heat” was more of a rock/disco hybrid than her big hit, which suited Bridges’ background more (she’s stated her favorite singer growing up was Elvis Presley). When this song didn’t match “I Love the Nightlife,” and her subsequent albums didn’t chart, Bridges moved into DJing for clubs in and around her native Charlotte, NC.