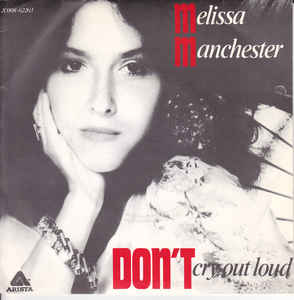 Only one real disco song this week - and that was more mood music than anything else.

Melissa Manchester, “Don’t Cry Out Loud,” #10, 3/31/79
I like Melissa Manchester, and this is a great album – except for the title track, this song, which doesn’t fit it at all. Manchester recorded the album with Leon Ware as producer (Ware had written and produced for Motown, writing “I Wanna Be Where You Are” for Michael Jackson and producing I Want You for Marvin Gaye), writing or cowriting nine out of ten songs herself (the exception being a remake of Stevie Wonder’s “Bad Weather”). But Clive Davis didn’t hear a single, and… their opinions vary from there. Davis (from his autobiography): “Melissa hated both [“Don’t Cry Out Loud” and “You Should Hear How She Talks About You”] with a passion. In fact, Harry Maslin, whom I brought in to produce “Don’t Cry Out Loud” with her, credits Melissa’s anger at having to sing it for the strength of her performance.” Manchester (in a 2015 interview): “[Davis] remembers history his way and I remember history my way. He remembers bringing me “Don’t Cry Out Loud.” I remember being friends with Peter Allen and Carole Bayer Sager and hearing “Don’t Cry Out Loud” as a very quiet song, bringing it to him and saying yes, it’s gorgeous, let’s do it the way Peter did it – as beautiful and quiet. When I showed up in the studio and the cannons blew on this huge version – which turned out beautifully, it turned out as a gift.” Anyway, she received a Grammy nomination for the song.

Poco, “Crazy Love,” #17, 3/31/79It only took Poco two labels, ten years, and eleven studio albums before they finally notched a top 40 hit. Rising from the ashes of Buffalo Springfield (original guitarists Richie Furay and Jim Messina had both been members of that band), the band came together on Epic through an odd trade – Furay was signed to Atlantic through Buffalo Springfield, while Graham Nash was signed to Epic through The Hollies, but their new bands (Poco and Crosby, Stills, and Nash) were with the opposite labels, so the two companies negotiated a trade. Anyway, Furay and Messina were long gone from Poco by 1979 – the only original member left was pedal steel player Rusty Young, who wrote and sang “Crazy Love.” Released on ABC Records just as the label was being absorbed by MCA, the song and album defied all odds and became Poco’s biggest hits.

Giorgio Moroder, “Chase,” #33, 3/31/79
Instrumentals were becoming less frequently found on the charts in the late 1970s, but they still popped up now and then. This was Moroder’s second chart hit; his first, “Son of My Father,” had made #46 in 1972. In the intervening years, Moroder had become better known as a songwriter and producer with and for Donna Summer (he’s also worked with Elton John, Blondie, and other acts). This song comes from the film Midnight Express and can be found on that soundtrack album. I doubt it got a lot of Top 40 airplay, but it was also released as a disco single and charted in the United Kingdom.

Heart, “Dog and Butterfly,” #34, 3/31/79
Second single from Heart’s 1978 album of the same name. This song was more like Ann and Nancy Wilson’s folk past (if you listen carefully to the band’s first few albums, they work out a balance between folk and Led Zep-like power chord rock). And according to Ann, this was written about her own dog. Per Nancy Wilson, “As Ann watched her dog it struck her as symbolic as to how life can be. When you’re an earthbound creature we’re always jumping and reaching for things we can never really catch, but you try anyway. And that’s the point of the song, we’re always trying to grab at something higher.”

Toto, “I’ll Supply the Love,” #45, 3/31/79
Second chart hit from Toto’s debut album. Eight of the ten songs on the album were written by keyboard player David Paich (son of producer and arranger Marty Paich, who worked with Frank Sinatra, Aretha Franklin, Barbra Streisand, and Stan Kenton, and was the orchestra leader for the variety shows The Glen Campbell Goodtime Hour and The Sonny and Cher Comedy Hour), this was sung by Bobby Kimball, who was the band’s full-time lead singer for their first four albums and again from 1999 to 2008. The video comes complete with some cheesey late 1970s effects and an animated intro.

The Faragher Brothers, “Stay the Night,” #50, 3/31/79
By the time this song was released, the four Faragher Brothers had become five brothers and one sister. But I guess they decided to keep the name anyway. The Faraghers had a long history in the music business; brothers Danny and Jimmy had started out in the 1960s bubble gum pop group The Peppermint Trolley Company (probably best known for their first-season-only rendition of The Brady Bunch theme), which morphed into a power pop/soul group, Bones. The Faragher Brothers recorded two albums for MCA, the parent album for this song, Open Your Eyes, and one more, The Faraghers for Polydor before the band came to an end. This video includes both “Stay the Night” and “Open Your Eyes.”

BTO, “Heartaches,” #60, 3/31/79
Second and final album by the band formerly known as Bachman-Turner Overdrive; the name change was necessitated by founder Randy Bachman’s departure (although brother Robbie was still with the group). Not surprisingly, BTO without Bachman (who had previously helmed The Guess Who with Burton Cummings) didn’t generate a lot of interest, and this was their one American Hot 100 entry (the song did better in their native Canada). The parent album for “Heartaches,” Rock ‘n’ Roll Nights, was produced by Jim Vallance, who also wrote several songs for the album (his future songwriting partner, Bryan Adams, also wrote one song).

Judy Collins, “Hard Times for Lovers,” #61, 3/31/79Collins’ final pop singles entry (she scored 11 hits overall on the Billboard Hot 100, including “Send in the Clowns” twice), this was a take on couples’ inability to stay together, and came from the album of the same name. Collins probably wasn’t in the best frame of mind when the album was recorded – she had just been through alcohol rehab, and was still struggling with bulimia (she would conquer that a few years later); the fact that the album is completely out of print may reflect this. Collins still records, and toured in 2017 with Stephen Stills (who wrote “Suite: Judy Blue Eyes” for her; it appears on Crosby, Stills & Nash’s first album). This isn’t a great video (it’s live at the Capitol Theatre in Passaic, NJ around the time of the song’s release, and it’s in black and white), but it’s interesting to see a performance video from that era.

Bandit, “One Way Love,” #77, 3/31/79
English rock band that recorded two albums for Ariola Records (not to be confused with Arista Records) in the late 1970s; this would be their one and only chart hit. The band had turned over almost completely between their first album release in 1977 and their second, Partners in Crime (not to be confused with Rupert Holmes’ 1979 album of the same name); only Danny McIntosh remained from the first group. Bass player Tony Lester wrote most of the album’s songs. McIntosh is now guitarist for Kate Bush, and has been married to her since 1992.