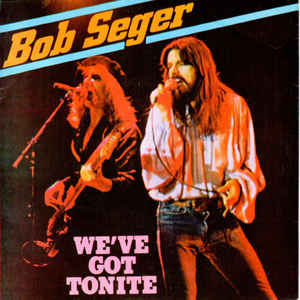 Toto, “Hold the Line,” #5, 1/13/1979
Toto kind of gets a bum rap (aside from “Africa,” which will probably be placed in a time capsule) – many people knock their music because, well, they’re studio musicians. So what? They were good studio musicians (well, they still are; they’ll be touring Asia and Europe in the first half of this year). Okay, they probably could have used a little better songcraft (David Paich wrote two classics with Boz Scaggs, “Lowdown” and “Lido Shuffle,” but none of the songs on their first album quite hit those highs). Nevertheless, this is a catchy singalong tune, which is probably what they were going for. First hit off their debut album, and their biggest until “Rosanna” came along.


Bob Seger, “We’ve Got Tonite,” #13, 1/13/1979
Bob Seger’s one of my favorite artists – and this may be the one song of his I can’t stand. It’s almost as if he was trying to write a female-friendly version of Stephen Stills’ “Love the One You’re With” in the era of no-pressure-one-night-stands – with the intention of hitting every demographic for his album Stranger in Town (this was the third single from that album). Drenched with strings, it just goes against what Seger had spent years trying to accomplish. It pains me to think this song was played at proms all over the country. (Additional negative points for misspelling “Tonight” – is the male protagonist so horny he can’t be bothered to use all seven characters? – and for the Kenny Rogers/Sheena Easton remake, which is equally lousy.) If you’re going for a great Seger love ballad, try “You’ll Accomp’ny Me” instead. I really hope this isn’t an official video, by the way.

Queen, “Bicycle Race/Fat Bottomed Girls,” #24, 1/13/1979
Queen tried the double-A side thing again after the success of “We Will Rock You/We Are the Champions,” and it didn’t quite work so well – possibly because playing “Fat Bottomed Girls” in a stadium full of sports fans probably wouldn’t work quite as well. Still, “Bicycle Race” is a fun listen today, full of pop culture references from the second half of the 1970s. And, yes, there was a charming poster available for those who purchased the album Jazz containing the themes from both of these songs. Don’t Google it at work. (I couldn’t find a performance video showing both songs, but this one of “Fat Bottomed Girls” alone seems pretty good.)

Boston, “A Man I’ll Never Be,” #31, 1/13/1979
Second single from their 1978 album Don’t Look Back, and although Tom Scholz doesn’t love this album (he and Epic Records were in litigation over it for years; his claim was the label released it before it was complete), this song had been part of their set list for awhile before its release. This was their first hit ballad, and although it’s been surpassed by their 1986 hit “Amanda,” it’s a pretty good song – and doesn’t get a whole lot of airplay today.

Gene Simmons, “Radioactive,” #47, 1/13/1979
Kiss famously released self-titled solo albums by each of the individual members in October 1978, and while they all shipped platinum (e.g. over 1,000,000 copies of each album were manufactured and released), they didn’t sell particularly well at the time, with Simmons’ LP performing the best on the Billboard album chart at #22. Simmons’ one solo hit features Aerosmith’s Joe Perry on guitar, and among the backing singers on the song are Bob Seger (can’t recognize him) and “Kate” Sagal – who would be much better known in subsequent years as actress Katey Sagal (Married… With Children, Sons of Anarchy).

Kenny Loggins, “Easy Driver,” #60, 1/13/1979
Second and final chart hit from Loggins’ 1978 solo album Nightwatch, and something of an indicator of where his solo hits would head – this sounds more like “I’m Alright” than anything he’d released up to this point. I guess it’s supposed to be about a car – or is it about a woman? In any case, not many people care anymore – the only time this song was included in a Loggins hits compilation was the now-out-of-print The Essential Kenny Loggins 3.0 (it didn’t rate the regular version, which is still around today).

Player, “Silver Lining,” #62, 1/13/1979
This is what happens when bands pigeonholed as middle of the road release a rocker. This was the second single from their album Danger Zone on RCA. The band apparently was having issues with direction by this point – lead singer and guitarist Peter Beckett would leave following the tour supporting the album – and the following few years saw a label change from RSO Records to Casablanca, and no more top 40 hits. There are various versions of the band touring as a group (generally with lead singer Peter Beckett), while bass player Ron Moss has also been continuing a music career while starring for 25 years in The Bold and The Beautiful, a CBS soap opera.

Stephen Bishop, “Animal House,” #73, 1/13/1979
Unfortunately for Bishop, he was on ABC Records in 1978, a record label famed for poor decisions at the best of times. The label was on the verge of being sold to MCA Records, and would go out of business in March (although there were still releases under the ABC logo until June). Anyway, even though ABC had just released the album Bish in the fall of 1978 (which yielded a top 40 hit in “Everybody Needs Love”), the label decided to release this soundtrack song instead of a second song from his album. While there was a certain amount of logic there – Animal House was a gigantic hit in theaters (and Bishop had a minor role in the movie) – the film was released in late July of 1978, and was probably mostly out of theaters by the end of that year. Plus the song itself doesn’t sound like typical Bishop (it’s a ‘50s-style rocker, and Bishop sings completely in falsetto). Anyway, the song didn’t score big, and the subsequent Bish single “Looking for the Right One” (which was most similar to Bishop’s biggest hit to that point, 1977’s “On and On”) didn’t chart at all – bringing his career momentum to a halt. I’m sure some record executive has an explanation for this somewhere.  (Note:  I had to search a lot for a good video to link – some of the better ones on YouTube wouldn’t link, and many of the ones that do link are rerecorded versions by Bish, who unfortunately has lost much of his upper register.)

Ted Nugent, “Need You Bad,” #84, 1/13/1979
Since I don’t have anything good to say about Ted Nugent, you’ll get nothing but the facts here. Lead single from Nugent’s 1978 album Weekend Warriors on Epic Records, which made #24 and hit platinum.

Posted by Curt Alliaume at 5:05 PM