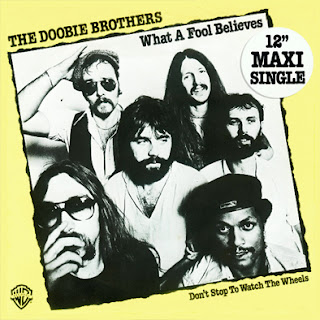 
Short week – only five songs, one of which was huge.

The Doobie Brothers, “What a Fool Believes,” #1, 4/14/79
First single release from the band’s Minute by Minute album, and a huge comeback hit for the band (their previous album, Livin’ on the Fault Line, was only one of two studio albums during their heyday years of the 1970s and early 1980s to yield no top 40 hits). The song was written by Doobie Brothers singer and keyboard player Michael McDonald with Kenny Loggins, who had started his solo career. In a recent interview with The Wall Street Journal, McDonald said, “Before Kenny arrived, I was at the piano playing unfinished songs. Just as I finished playing my verse to “What a Fool Believes,” there was a knock at the door. I went to get Kenny, but before we said more than hello, he said, “What was that riff you just played?” They finished the song together, and Loggins put his version on his album Nightwatch. McDonald and producer Ted Templeman put it on Minute by Minute (apparently to the dismay of Warner Brothers records), and Loggins was blown away: “When I heard Michael's version, I thought it was amazing. Michael's feel, vocal harmonies and stride keyboard made the song drop-dead perfect.”

Gary’s Gang, “Keep On Dancin’,” #41, 4/14/79
1979 had its share of disco one-shots that I could happily live without never hearing again – but there were a few winners too, and this everything-but-the-kitchen-sink production was one of them. Vibes, keyboards, percussion – it has everything. Gary’s Gang was vocalist/guitarist Eric Matthew (real name Joseph Tucci) and drummer Gary Turnier from Long Island; they recorded all the instruments themselves for Sam Productions (Columbia/CBS later picked up distribution). It fell just short of the top 40 pop, but made it to #1 on Billboard’s Disco chart, and was a top 10 hit in Ireland and the United Kingdom. And the American Bandstand video (which was kindly edited by someone to fit a remix of the song, although the music doesn’t always fit the visuals) is a riot: a lead singer on acoustic guitar (not plugged in at all), two percussionists, vibes, two keyboards, and someone playing barely audible triangle, but no bass player?

Machine, “There But for the Grace of God Go I,” #77, 4/14/79
So much for hedonistic disco – this one has a message (and hits you over the head with it). “There But for the Grace of God Go I” is about a Latino couple that moves from the Bronx after their daughter is born to “someplace far away, with no blacks, no Jews, and no gays.” The daughter grows up to have a drug problem and runs away at age sixteen, because she’s been overprotected by her parents (“Too much love is worse than none at all”). Machine was formed by Jay Stovall, Kevin Nance, and August Darnell, the latter having formed the band between his two more famous acts, Dr. Buzzard’s Original Savannah Band and Kid Creole & The Coconuts. This video is from a 2009 reunion that included Stovall, Nance, and singer Claire Bathé, but not Darnell.

Euclid Beach Band, “I Need You,” #81, 4/14/79
The story of this Cleveland-based band is more interesting than their one national chart single, a remake of a song written by Eric Carmen and recorded by Frankie Valli in 1977 (3T remade the song in 1996, which went top 10 in six countries but didn’t chart in the United States). Euclid Beach Band formed in 1978 to record “There’s No Surf in Cleveland,” a Beach Boys homage which was recorded during a blizzard that year, with royalties donated to the Red Cross after they led rescue efforts during that storm. Euclid Beach Band got a major-label contract (appropriately, with Cleveland International Records), but the parent album of “I Need You” didn’t chart and the band broke up shortly thereafter, reuniting for a final single “Headlands” (after an Ohio state park) in 1983.

Livingston Taylor, “I’ll Come Running,” #82, 4/14/79
Second and final chart single from Taylor’s 3-Way Mirror album (which Epic Records doesn’t seem to want to make available, so search the used vinyl stores). It’s a typical oops-I-wish-I-hadn’t-dumped-you song (men are so stupid). Taylor is still recorded and touring like crazy; he released an album earlier this year, The Best of LIVe – 50 Years of Livingston Taylor Live, a one-disc distillation of what will be a five-disc set scheduled to appear in July. I’ve mentioned before I’ve caught him live and would recommend tuning into a scheduled live-stream concert on May 22, Livingston Taylor From His Living Room!

Posted by Curt Alliaume at 9:43 PM