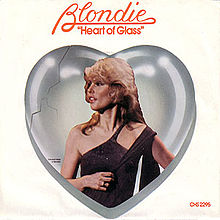 
Blondie, “Heart of Glass,” #1, 4/28/79
And all the white late baby boomer guys said, “Thank God – a rock and roll band with a hot chick.” (They would be surprised to find out Deborah Harry was 30 years old, and further surprised later on to discover she’d shaved four years off her real age to come up with that number – “You mean she’s older than Lesley Gore?”) Blondie had sprung out of the same New York rock scene that spawned The Talking Heads and Television, but Harry had the attitude and looks that made them stand out. Their first two albums on Chrysalis Records weren’t hugely successful, but the third one, Parallel Lines, revealed more of a power pop sensibility, and “Heart of Glass” had a Eurodisco sound that gave them plenty of AM airplay. The band also credited WKRP in Cincinnati for the song’s success (it appeared in the first season episode “A Commercial Break”); a gold record for “Heart of Glass” could be seen in the bullpen in future episodes.

George Benson, “Love Ballad,” #18, 4/28/79
This was the only chart hit from Benson’s double album Livin’ Inside Your Love – a good deal on one CD, not so much on two vinyl albums, although it did make #7 on the Billboard album charts, his fourth top 10 album in a row. “Love Ballad” had been a top 20 pop chart hit and went to #1 on the Soul chart for L.T.D. in December 1976, so it might have been a little early for a remake (and having Benson’s single mix vary significantly from the album version probably didn’t help matter), but this was a reasonable success, with Benson’s scat singing matching his guitar work.

Bob Welch, “Precious Love,” #19, 4/28/79
After two flop albums with the power trio Paris, Welch garnered three top 40 singles and the #19 album over 1978 with French Kiss, so he must have figured, “Do the same thing again.” (He may have missed that virtually everybody who’d had anything to do with anyone from Fleetwood Mac – Welch was with the band from 1971 to 1975 – was doing well in 1978, including Walter Egan and Kenny Loggins.) Anyway, his Three Hearts album and “Precious Love” fit right into the disco era with a megacatchy melody and 1970s references (“The way you fill those blue jeans, baby”), but it had a half-developed chorus lyric and certainly didn’t help his rock credibility. Welch must have known this as well – when he hosted The Midnight Special that September, “Precious Love” was eschewed in favor of “The Ghost of Flight 401” (a Three Hearts album track) and four other songs emphasizing his rock roots.

The Police, “Roxanne,” #32, 4/28/79
Two big debuts this week. Bass player/vocalist Sting had a jazz background, Stewart Copeland had been with the prog rock band Curved Air, and guitarist Andy Summers had been with a latter-day version of Eric Burdon and The Animals, but all had been energized and inspired by England’s punk movement, so they melded the backgrounds and Sting’s writing ability into something new. “Roxanne,” about a man who falls in love with a prostitute, wasn’t a top five hit anywhere (even the band members weren’t excited about its possibilities), but manager Miles Copeland (Stewart’s brother) saw possibilities in the song, and used it to get their first record contract with A&M Records.

April Wine, “Roller,” #34, 4/28/79It only took the band seven years to garner their second American hit – “You Could Have Been a Lady,” which was their biggest hit in their native Canada, hit #32 in 1972. “Roller,” about an upper-class woman the song’s narrator pined after, was from the band seventh album First Glance, but fans in Flint, Michigan took a liking to the song and made it a requested favorite, which nudged Capitol Records into giving the song and album a push nationwide. At this point the band was a quintet featuring Myles Goodwyn, Brian Greenaway, Gary Moffet, Steve Lang, and Jerry Mercer; Goodwyn and Greenaway are still with the group today.

Gino Soccio, “Dancer,” #48, 4/28/79
Another Canadian act (Soccio hails from Verdun, Quebec), “Dancer” would be Soccio’s only entry onto the Billboard Hot 100. “Dancer”/”Dance to Dance” would make #1 on the Billboard Dance chart, however, one of four consecutive top five dance hits for him between 1979 and 1982. In a 1979 interview with Canadian Press, Soccio sounded like he wanted to spread the gospel of disco: “Disco is more than just music. It’s a social movement, and I’m not jiving you when I say it’s spreading to epidemic proportions. It fills a demand for people who want to blow their minds dancing.” He sounded less upbeat about it when Wax Poetics caught up with him in 2013: “After 25 years, you run out of shit to say.”

Rick James, “High on Your Love Suite,” 4/28/79
First single release – I think – from James’ album Bustin’ Out of L Seven, which Motown released while his previous LP Come Get It! was still pretty high on the charts (and as the single “Mary Jane” from that album was tumbling down the Hot 100 – record labels didn’t plan out release timing back then as well as they do now, I guess). Anyway, this single wasn’t released until Bustin’ Out of L Seven had been out a few weeks, which is the reverse of the usual pattern. It’s James’ typical funk/rock hybrid, with obvious drug references.

Chicago, “Gone Long Gone,” #73, 4/28/79
Midtempo pop song, written and sung by Peter Cetera, whose tenor voice would be the calling card for Chicago for several years (between 1976 and 1985, Cetera had the lead or co-lead vocal on all of their top 40 hits). The slide guitar on this song comes from new member Donnie Dacus, who replaced Terry Kath after the latter accidentally shot and killed himself in January 1978. (Dacus himself would be let go from the band by the end of the year.) This is one of the rare Chicago album covers where the band members were easier to spot than the ubiquitous Chicago logo; the problem was figuring out who was who.

Ultimate, “Touch Me Baby,” #82, 4/28/79
Another anonymous disco group courtesy of Casablanca Records; this record was only notable for an album cover that may have been kept behind the counter and was made available only upon request. The music inside, to judge by the “Touch Me Baby/Love Is the Ultimate” medley (which hit #1 on the Billboard Dance chart) is similar. Produced by the team of Juliano Salerni and Bruce Weeden; Salerni played all keyboards and wrote all the songs on the self-titled parent album, while Weeden played all guitars. (So help me, the credit to the women singing reads “Sensuous Vocals Sung by ‘ULTIMATE’.”) They did make a second album, also titled Ultimate (honestly, why would you do that to your sales department?), in which Salerni was gone, and we learned the singers’ names (on that album, anyway) were Barbara Hernandez, Riti Saunders, and Deborah McGriff. After that, Ultimate was history.

Orsa Lia, “I Never Said I Love You,” #84, 4/28/79
Most of the time, any singer who hit #1 on the Easy Listening chart (now the Adult Contemporary chart) could be guaranteed at least a top 40 pop hit. Here’s the rare exception: this song made #1 Easy Listening, but obviously came nowhere close on the Hot 100. Despite the vaguely European-sounding name, Lia was born and raised in Virginia. Orsa Lia would be the only album she would release on Infinity Records (an MCA subsidiary); by the time she and labelmate Dobie Gray recorded a duet late in the year, the label folded, and only two artists were picked up for the parent label (Spyro Gyra and Rupert Holmes), so that was it for Lia’s career. Cowritten by Hal David, in one of his rare outings after his partnership with Burt Bacharach broke up.


Exile, “How Could This Go Wrong,” #88, 4/28/79
That’s easy; having a country band that had hit #1 with a ballad crossover (“Kiss You All Over”) record a really bad disco tune. Believe it or not, this piece of junk was produced and cowritten by Mike Chapman, who also produced Blondie’s “Heart of Glass” – if he was thinking the Eurodisco sound was transferrable to all bands, he couldn’t have been more mistaken. Lead singer Jimmy Stokely would bolt the band before the release of “How Could This Go Wrong” or its parent album, All There Is, so other members had to lip sync his parts for the music videos. After All There Is failed to chart (the band’s previous album, Mixed Emotions, had made #14 and went gold), the band regrouped and focused on country music, hitting #1 with ten out of eleven singles on Billboard’s Country charts between 1983 and 1987.

Average White Band (AWB), “Walk On By,” #92, 4/28/79
Odd choice for a single – here was a funk band in the middle of the disco era, and Atlantic Records released a remake of the Dionne Warwick standard that could easily have been a major Adult Contemporary hit. (I don’t know if it made the grade there; this was actually the band’s first Hot 100 hit in three years.) This would be the band’s last album on Atlantic; they switched over to Arista Records in 1980. Another song cowritten by Hal David (with Burt Bacharach, of course), “Walk On By” has also charted for Isaac Hayes, Gloria Gaynor, and Sybil.