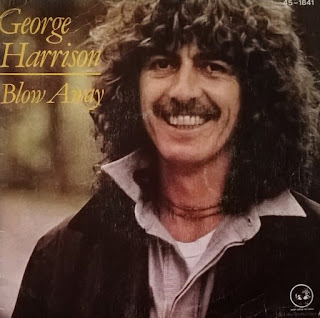 One huge hit this week, and another that was huge then but you rarely hear now.

Peaches & Herb, “Reunited,” #1, 5/5/79
This was released a little earlier than most second singles are (the first single from 2 Hot!, “Shake Your Groove Thing,” hadn’t come close to peaking when emerged in March), but Polydor knew what they had – a great prom slow dance song. “Reunited” broke the string of dance songs making #1 (depending on how you feel about The Doobie Brothers’ “What a Fool Believes”) and stayed at the top for four weeks, the longest slow song run at #1 since Exile’s “Kiss You All Over” the previous year. As with “Shake Your Groove Thing,” “Reunited” was cowritten by Dino Fekaris and Freddie Perren and produced by Perren.

Frank Mills, “Music Box Dancer,” #3, 5/5/79
You almost never have instrumentals make the charts anymore, and I have a theory why. Back in the day, radio stations would run news broadcasts at or near the top of the hour, as part of their required news and public interest content requirements (I think this was repealed as part of the Fairness Doctrine repeal in 1987, but I’m not sure). Anyway, this was suggested to me in the book The Beatles Forever by Nicholas Schaffner: it was easier to run instrumentals going into the news breaks, because it wasn’t as big a deal cutting off part of the song for the news as it was cutting off a song with vocals. This isn’t why “Music Box Dancer” originally launched in Canada – Mills had been a member of The Bells (who hit with “Stay Awhile” in 1971) and was a pianist for the CBC; “Music Box Dancer” was sent out as the B-side of a single in 1978 to AC stations in Canada, but an Ottawa pop station starting playing “Music Box Dancer” instead and it caught on from there. But I have to admit it was probably a lot easier to play 45 seconds of this song than 45 seconds of Rod Stewart or Neil Diamond.

Chic, “I Want Your Love,” #7, 5/5/79
Second single from the band’s second album, C’est Chic, and as you can imagine it wasn’t quite as big a deal (or as good) as “Le Freak.” I guess I should say there isn’t anything bad about the song (although the bell ringing is annoying at times); I suspect the band and Atlantic Records knew that “Le Freak” stood out. C’est Chic was released in Europe as Très Chic, which included all of the C’est Chic songs plus “Dance, Dance, Dance (Yowsah Yowsah)” and “Everybody Dance,” which had been hits off their first American album, Chic (I guess that wasn’t released as a standalone album in Europe for some reason).

George Harrison, “Blow Away,” #16, 5/5/79
First single from Harrison’s self-titled album, which had been his first in nearly two and a half years (in the late 1970s, that was a long time between albums). Harrison, with a new marriage and a young son, had taken a more relaxed approach toward the music business and life itself, which was reflected in this song. In his book I, Me, Mine, Harrison said the song came out of his inability to fix a leaky roof in his home, and allowing the problem to frustrated him was exacerbating the situations, so he did his best to let it go instead. What’s with the duck?

The Allman Brothers Band, “Crazy Love,” #29, 5/5/79
First single from the band’s “reunion” album Enlightened Rogues – the band had split up following their 1975 album Win, Lose, or Draw following a drug-fueled tour and Gregg Allman testifying against their road manager in a cocaine distribution charge. By the summer of 1978, however, they discussed reuniting (the splinter acts had not been successful), and this was the first single from the reunited band (keyboard player Chuck Leavell and bassist Lamar Williams did not return).  This was the first time that two different songs of the same title popped up in the top 40 simultaneously (Poco’s “Crazy Love” had passed it on its way off the chart in April). That’s Bonnie Bramlett (formerly of Delaney & Bonnie, now acting and singing under the name Bonnie Sheridan) on backing vocals.


The Pointer Sisters, “Happiness,” #30, 5/5/79
Second and final chart hit from the group’s first album as a trio, Energy. This was the last top 40 hit written by legendary songwriter and producer Allen Toussaint, who had many of his works recorded successfully by rock, pop, and soul artists (“Mother-in-Law” for Ernie K. Doe, “Southern Nights” for Glen Campbell, “Working in a Coal Mine” by Lee Dorsey). He also produced “Right Place, Wrong Time” for Dr. John and “Lady Marmalade” for LaBelle, and recorded with Paul McCartney and Elvis Costello. Toussaint died in 2015 at age 77 while touring in Spain. I have to say I like the song arrangement a lot better here than on the studio version.


Ironhorse, “Sweet Lui-Louise,” #36, 5/5/79
Ironhorse was Randy Bachman’s next project after leaving Bachman-Turner Overdrive (after recording a solo album for Polydor, Survivor, which reunited him with Burton Cummings; the two had led The Guess Who in the late 1960s). Like BTO’s big hit “You Ain’t Seen Nothin’ Yet,” Bachman used a bit of stuttering on the choruses (he used that as a shout-out on “You Ain’t Seen Nothin’ Yet” to his brother Gary, who actually did have a stutter). The other band members were Tom Sparks on vocals and guitars, John Pierce (later with Pablo Cruise) on bass, and Mike Baird (who has played with Hall & Oates, Rick Springfield, Eddie Money, and others) on drums.

Sylvester, “I (Who Have Nothing),” #40, 5/5/79
This was Sylvester’s last chart hit, from his 1979 album Stars, coproduced by Harvey Fuqua. It was a cover of a Ben E. King hit from 1962, and was originally written in Italian as “Uno Dei Tanti” (legendary songwriters Jerry Leiber and Mike Stoller are credited on the rewrite). It’s charted five time in the United States, with the other three courtesy of Terry Knight and The Pack, Liquid Smoke, and Warhorse. Sylvester (real name Sylvester James Jr.) died in 1988 of AIDS-related pneumonia, at age 41.

Sammy Hagar, “Sittin’ on the Dock of the Bay,” #65, 5/5/79
Producer John Carter (who went only by his last name) did a good job of dragging Bob Welch from the rock scrap heap in 1977, but he didn’t do Sammy Hagar any favors as time went along. When Hagar’s early hard rockers didn’t hit, Carter pushed him toward crooner territory, with songs such as this remake of the Otis Redding classic, which didn’t fit Hagar’s talents at all. Never released on a studio album (Hagar would self-produce his Street Machine album, which came out later that year), the song features Steve Cropper (who cowrote the song with Redding and produced it after Redding’s death) on guitar, and Brad Delp, Sib Hashian and Barry Goudreau on backing vocals. The only Hagar video I can embed is an all-star jam that sounds nothing like the single version of the song (although it’s probably a lot better); so try this instead.