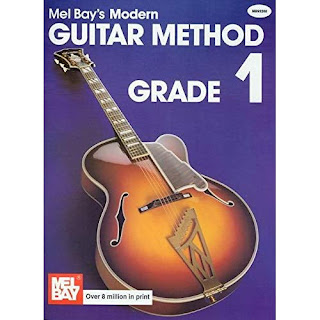 I did the math recently and realized with a jolt that I have been playing guitar for over thirty-nine years. I remember the date of my first guitar lesson - January 14, 1980 - like it was yesterday, mostly because my teacher, a hippie named Tom who smoked like a chimney, wrote the day and date of each of our lessons in my music composition book. I even remember my first lesson, from the Mel Bay Guitar Method book, "Notes on the First String", and the first song I had to learn all the way through, "House of the Rising Sun." This was a massively important day for me because it was the accumulation of a deep desire to learn guitar, which my dad at first firmly opposed because I had earlier botched an attempt at learning trumpet. I could not explain to him why I wanted this so badly, but anyone who has ever strapped a guitar around their neck will understand. To give you a fuller picture of where my fifteen year-old head was on January 14, 1980, I will tell you that January 18 (Friday) was my first appointment at a family therapy office. I knew then which session was going to do me more good.


Within a few weeks, my guitar abilities improved greatly, which is to say I could four-chord my way through several Beatles songs and a few Springsteen tunes in my own fumbling, banging, string-breaking way (it took me several years to learn that I was holding the pick wrong and playing too hard, which accounted for all the busted strings). But it was mostly chords, almost all chords. I learned all the basic open chords (I despised open F and B-flat and I still do) and moved up to learning barre chords, mostly thanks to a pal who taught me songs like "Sweet Jane" and "Can't Explain". All I wanted to do was play, play, play. And sing. I saw the guitar as an accompaniment to my singing, not as an end to itself. Like Lennon and Springsteen and Dylan and Strummer before me, I yearned to express the deepest, most screwed-up feelings in my already battered heart.

Inevitably I encountered other guitar players. You learn a lot from other guitar players. The kid I mentioned above, the one who taught me the barre chord-based songs, went on to show me riffs and songs I never would have bothered to figure out on my own (and which I can play to this day even if years pass between attempts). My first band was a rockabilly 50s cover band, which was perfect for me because all our songs were I-IV-V (look it up), not especially complex, but they were fast and fun songs and I rocked my heart out on them. It's a lot easier to learn how to be in a band when the music itself doesn't require a lot of effort to learn. And anyway, I was in the band mostly because of my voice. I am a killer rock 'n' roll singer, that's a fact.

Other things followed: a crashing, besotting love affair with punk rock, rudimentary attempts at writing songs, bar gigs and solo gigs and more open mic nights than I can count. Playing guitar (and singing live) opened up doors for me, took me out of my sorry self, raised my crappy self-esteem to acceptable levels, and got me girls. In short, it was everything I had dreamed it would be. But as I got older and began playing with more serious musicians who were very, VERY serious about their instruments, the awkward times began. I came to understand that I was NOT a guitar player, but rather a singer who plays guitar.

I moved outta Jersey in the mid-90s and found a band in the DC area that played a weird set list consisting of current alt-rock hits and late 60s classic rock (on account of the age differences between the members), and while they were blown away by my singing, I was almost immediately barred from playing guitar onstage. This is because my playing "style", if you want to call it that, was in band terms too erratic, and I couldn't play any leads. That's right - fifteen years into playing guitar and I could not (and still can't) play lead guitar to save my life. More accurately, I DON'T play lead guitar, by choice, because I was and am still more interested in telling stories and singing my guts out than in learning complex riffs and intricate chords. I'm not necessarily proud of this, it's just what I do, but in the case of my DC-area band I was reduced to singing lead and banging a tambourine (which eventually was also taken away from me because I had no clue how to play a tambourine). For better or worse, my most natural musical state is banging out chords and singing my heart out. Did I mention that I m a killer rock 'n' roll singer?

So where I still get into trouble is talking about guitar playing with other guitar players. I might as well be discussing auto mechanics. Yes I can drive a car, but it beats me how to tune an engine. I can't tell you the number of guitar enthusiasts I know (and I know many) who have been disappointed by both my lack of ability and my lack of interest in the deeper mechanics of guitar playing. It leaves me feeling guilty - I should have practiced more, I should at this point in my life have a lot more ability after nearly forty years, doncha think? And yet while I love and admire truly great guitar players, and I know many, I am staggeringly bored by playing ability in and of itself. I don't go to many live shows anymore, but I am often invited by other musicians to check out this or that rock guitar legend and I feel like a jerk for saying no thanks. I was recently asked if I wanted to go check out Robin Trower and Nick Mason and I felt like saying "I'd rather schedule a root canal."  I know those guys are seriously talented, even insanely talented, but if I'm going to give up one of my precious evenings with the wife then it's gonna be for someone whose repertoire consists of fast, inspiring bursts of song that lift up my spirit and are under four minutes long. I'm afraid I recently broke the heart of a guy I just met who loves Steve Morse the way I love Bruce Springsteen and was excited that I even knew who Steve Morse is until he discovered that I can't name one song by Steve Morse. I sometimes feel like the idiot in the guitar player community, but I can't help it. I'm a singer who plays guitar.

To me, a guy like Mark Knopfler is a great guitarist not just because of his raw ability, but because his playing serves the song, not the other way around. This does not get me far with most guitar players, who tepidly acknowledge Knopfler's abilities but can always name someone else who's even better. Who else do I think is great? Here's an odd choice: the late, great Robert Quine, he of the Voidoids and Lou Reed fame, and whose work on the Reed song "Home of the Brave" is the most soaring, heartbreaking guitar playing I have heard in my lifetime. (His lead starts around 3:00.)

Finally, and don't get me wrong, I love and respect the work of dedicated guitarists, I am enthralled and mystified by all the great ones, and I am incredibly fortunate to have worked closely with guitarists whose abilities far outstrip anything I could ever do and whose work has enhanced my own music. My banging and singing on my song "South Street" would be just that if not for the incredible guitar work by my pal Dave McKittrick, whose massive paws can create the deepest, gentlest, most intricate music I have ever heard.

So I'm not an idiot, or a snob, but I'm also not a guitar player. I'm a singer who plays guitar, and my life has been made rich because of the guitar. Just don't ask me to play anything too complicated.
Posted by John E. Williams at 11:39 AM