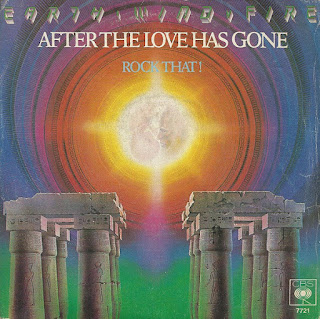 Combining two weeks again, as there were only three songs that peaked the week of September 22.

Second-biggest hit for the band (behind the #1 “Shining Star”) and it has an interesting history. First, it was written entirely by outside songwriters: David Foster, Jay Graydon, and Bill Champlin (usually Maurice White wrote or cowrote everything). The song had its beginnings when Foster helped produce an album for (of all people) Jaye P. Morgan, and was trying to get her a deal with Motown (if you’re dying of curiosity, the final eponymous album is on Spotify). While auditioning songs at the label’s offices, he forgot the words to one of the choruses—and ad-libbed the chorus to what became this song. He then worked with Graydon to come up with the full melody, and then Bill Champlin added the lyrics to the verses. The song was originally pitched by Foster to Daryl Hall & John Oates (who turned it down, wanting only to perform their own songs), then Champlin was going to record it for his own album, until Maurice White heard it and insisted on first dibs. It worked out well for EW&F; it’s a classic sad last-dance song that didn’t sound much like anything else they’d done.

Huge unexpected hit for this band, which hadn’t made the pop top 40 since 1975’s “The South’s Gonna Do It.” It’s a story song about (not surprisingly) the devil, who challenges a southern fiddler to a fiddling duel. Daniels has credited the storyline to a poem by Stephen Vincent Benét (author of John Brown’s Body and The Devil and Daniel Webster), “The Mountain Whippoorwill,” for the song’s inspiration. At a time where there wasn’t a lot of pure country music climbing the pop chart, this one struck a chord and revived Daniels’ career—none of his previous albums had hit the Billboard top 30 albums (and the previous two peaked at #83 and #105), but Million Mile Reflections made it to #5 and went triple platinum. This video quality isn’t the best, but the performance is fine.

Pretty ballad cowritten by David Lasley and Allee Willis, the latter of whom was on a hot streak (she also cowrote “September” and “Boogie Wonderland” for Earth, Wind & Fire). It comes from the perspective of a woman who’s been in the friend zone with a guy she’s clearly attracted to, and is ready for him to make a move, even if he breaks her heart later. (Vanessa Williams’ “Save the Best for Last” explored this territory to better effect much later.) Willis later said she was going through a breakup at the time, so the song was “completely autobiographical.” Nightingale hadn’t had a United States hit since “Right Back Where We Started From” in 1976, and while it was on her UK album Love Lines (Nightingale was born and raised in London), it was acquired by Windsong Records in the United States the following year, where the album was renamed after this track.

Thorpe had a lot of success in Australia from his teens onward (his family emigrated there from Manchester, England), but this is his only song to chart in America (coincidentally, it wasn’t a single hit in Australia). Not surprisingly, it’s pretty spacey. Thorpe had several songs chart as part of Billy Thorpe & The Aztecs, which were originally pretty squeaky clean at first and then a lot less so. Thorpe got into scoring movies and TV series in the 1980s, then returned to the stages in the 1990s, and continued to tour until his death from a heart attack in 2007.

Here’s one of the weirdest songs of the year—and for 1979, that’s saying something. It’s a disco arrangement, and the brothers Addrisi, who normally sang in tenor/baritone voices, both sing in falsetto here, so it sounds like a Bee Gees song. The lyric is about the male protagonist, who’s dancing by himself. But not like Billy Idol; apparently, he once had a female partner—but now she’s dead. So she’s the “ghost dancer” of the title—as far as the guy is concerned, he’s still dancing with her. I’m astonished this song got as far as it did, especially given disco was on the way out, but dead boyfriend/girlfriend songs can be surprisingly popular. This was the last chart hit by the two brothers, who notched six chart hits in all (including a remake of “Never My Love,” which they had written for The Association in 1967, and also hit the top 20 for The Fifth Dimension and Blue Swede), dating all the way back to 1959 with “Cherrystone.” The two brothers had been around a long time—they auditioned for the original Mickey Mouse Club. Older brother Don died of pancreatic cancer in 1984; younger brother Dick lives in Argentina.

This is one of those entries that’s almost impossible to find out much by Googling; almost every time I tried, I got dozens of hits on college marching bands. Anyway, Buckeye’s one self-titled album was released on Polydor in 1979. Ronn Price wrote or cowrote at least half the songs, as well as producing the album. (It looks like he’s now president of Prisongs, a company out of Nashville.) It’s standard pop rock, and I’m guessing it got a fair amount of airplay on Ohio stations… and on WNEW-FM in New York (per Cash Box)? Weird.

Fourth and final chart hit for Brown, from his second album Stargazer. It’s standard-issue disco, which was not what radio stations were playing at this point in 1979. Combined with the collapse of TK Records in 1980 (I’m sure the signs were there the year before), that was pretty much it for Brown’s recording career (although he did record an album in 1983 with Bob Gaudio of The Four Seasons producing, Back to Front). He did cowrite “Material Girl,” which hit #6 for Madonna in 1985, but a case on tinnitus pushed him away from music for a long time and into interior design. His latest album, Boom (2018), is available on Spotify.

Second chart single from the band’s eponymous debut album; this is a remake of a 1965 hit ballad by Billy Stewart, which made it to #6 on the R&B chart and #26 pop—so GQ’s version slightly topped the original (it made it to #5). A smart idea to release a ballad at this point after the success of the band’s “Disco Nights (Rock Freak),” although Arista Records president Clive Davis always released ballads whenever an opportunity presented itself. I’m guessing this also became a popular wedding song around that time as well. (This video shows the album cover for the second GQ album Two, but this song is actually on their first album, which despite the presence of two top 20 hits isn’t on Spotify.)

Second and final pop hit for this funk band out of Norfolk, Virginia (their first, “Welcome to Our World (Of Merry Music),” hit #68 in March 1977). It’s certainly more pure funk than disco (which was helpful at this stage), but that also might explain why it didn’t cross over to pop. Honestly, I don’t think this band was a high priority for Atlantic Records (which probably explains why they spent their career on sublabel Cotillion rather than going to the main label), although “Firecracker” went top five on the R&B chart, and the parent album In the Purest Form made it to the top 10 on Billboard’s R&B album chart and top 50 on the pop chart. The band broke up in 1983, but they’ve apparently made some reunion appearances in recent years.

Two things: 1) “Pousette-Dart Band” isn’t named after two people in the band; the group’s leader was Jon Pousette-Dart. And 2) Jon Pousette-Dart isn’t the abstract artist from the 20th century; he’s that guy’s son. Pousette-Dart Band released four albums in the 1970s—this song was from the fourth, Never Enough, produced by Norbert Putnam (who also worked with Dan Fogelberg). The song “For Love” was written by David Finnerty, who’s best known for his work with the band The Road Apples. Pousette-Dart Band broke up after this album failed to find an audience, but they’ve had the occasional reunion since then.

Posted by Curt Alliaume at 5:10 PM