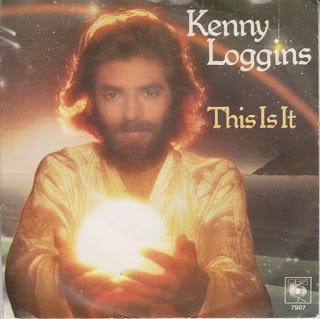 Great week last week. This week, not so much. It happens.

First single from Loggins’ third solo LP, Keep the Fire, and likely a relief for Columbia Records, which may have worried that Loggins could only hit as part of a superstar duet. (His version of “Whenever I Call You ‘Friend’” with Stevie Nicks had hit #5 in 1978; none of his other solo singles had cracked the top 40.)  Loggins did cowrite the song with Michael McDonald (who performs backup vocals); they also cowrote “What a Fool Believes” together. Loggins wrote in a 1999 blog post they were trying to write a love song, but Loggins turned it into an encouragement to go for it and fight worthy battles during a discussion with his father, who was suffering from health issues at the time.

Second single from the band’s album Cornerstone, a midtempo rocker written and sung by Dennis DeYoung. Originally the ballad “First Time” was going to be the second single, but that apparently became a point of contention between DeYoung and guitarist/singer Tommy Shaw, who was concerned consecutive ballads would alienate the band’s rock base (which would start to occur with subsequent albums anyway). That may be the reason “Why Me” has never made it to a greatest hits set (“First Time” is represented on their Greatest Hits, Volume 2 collection).

Stewart had run out of Stevie Nicks songs to release from Bombs Away Dream Babies, so this one is on his own (albeit with Lindsey Buckingham playing guitar and producing), and it’s pretty good. As one might surmise from the title, it’s a song of regret. This was Stewart’s last chart hit single and one of his last chart albums; his follow up for RSO Records, Dream Babies Go Hollywood, was a flop, and he was dropped by the label. (It’s possible the lack of success was due to the absence of Nicks and Buckingham; they were likely touring in support of Tusk.) Stewart continued to release music on independent labels and his own record company until his death in 2008. An important note: Bombs Away Dream Babies is out of print and unavailable for download, so almost all the versions of the album’s three singles on Amazon and iTunes are remakes and live versions (and it should be noted Stewart’s voice deteriorated as he aged). The exception is “Gold,” which is on the Stevie Nicks anthology Stand Back: 1981-2017 (a misnomer, given “Gold” came out in 1979).

Ladies and gentlemen, I present Kenny Rogers’ nephew! This song came from Dann Rogers’ first LP, Hearts Under Fire, released by International Artists, which appears to have been a sublabel of A&M. The album was released in 1978, so obviously it took awhile for this song to catch on (it did make top 10 on the Adult Contemporary chart, where it’s a natural fit; it doesn’t have his uncle’s country sound). Rogers’ second album, Still Runnin’, came out in 1987 on MCA, then he took a long hiatus from the music industry, based on the biographical information available on his web site and Amazon (where his autobiography, Love, Laughter and Rage, can be ordered for Kindle)—alternately, it’s attributed to label interference, addiction issues, and moving into the financial field. He is still recording today; Life Reflections/Life Revealed is available through his web site.

Sister Sledge got hit by a one-two punch for this release. First, the disco genre had suffered a major backlash since their previous release, the 1979 platinum album We Are Family. Second, Nile Rodgers and Bernard Edwards of Chic, who wrote and produced their material, were working with other artists as well (they would helm four albums in 1980: Sister Sledge’s Love Somebody Today, Sheila and B. Devotion’s King of the World, Diana Ross’ hit Diana, and their own Real People with Chic), which likely forced them to issue songs that they might have otherwise tried honing a bit more. There’s nothing wrong with “Got to Love Somebody,” but it’s reminiscent of “We Are Family” and Chic’s “Rebels Are We” and “My Forbidden Lover” and Ross’ “Upside Down” and probably a couple of others I haven’t heard.

Aerosmith was in such turmoil due to drugs and financial problems by the end of 1979 it’s almost a shock they could release their sixth album, Night in the Ruts, at all. Joe Perry had left the group, and Steven Tyler had a morass of addiction problems. As a result, this remake of the old Shangri-Las song (Mary Weiss of The Shangri-Las is among the backing vocalists on the tune) became the only charting single. But this was too pop for AOR to play, and didn’t catch on at top 40 radio (it may not have helped that Carole King’s daughter Louise Goffin had also released a single version of the song in 1979, which hit #43 in October). Night in the Ruts eventually went platinum, but “Remember (Walking in the Sand)” is pretty much an orphan today (although it’s been performed in concert as recently as 2017; other than their 1980 Greatest Hits set), it’s been excluding from all their anthologies.

Surprising flop second single from the band’s Eat to the Beat. Billboard’s review of the single described it as a “rock-disco number” (it’s danceable, but it ain’t disco). It’s possible the world was getting a little tired of Blondie, or just wanted something that was more disco than their recent releases (the three singles that followed “Heart of Glass” didn’t break the top 20). Weird video (which probably didn’t get much circulation, as MTV wasn’t around yet): the guys in the band look like they’re channeling Devo and Harry (in a brunette wig) looks stoned (although if you’re looking for Harry wearing not many clothes, this should do it—so you may not want to play it at work).

Other Superhits 1980 entries you may or may not enjoy:

Posted by Curt Alliaume at 1:01 PM