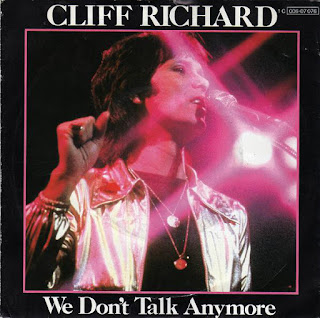 By Curt Alliaume
More hits from the first few weeks of the 1980s.

Michael Jackson, “Rock With You,” #1, 1/19/80
Second hit from Jackson’s breakthrough solo album Off the Wall (he made four solo albums with Motown between 1972 and 1975, but to put it a little unkindly, they weren’t very good). To me, this song was a breakthrough as well (even though it was written by Rod Temperton, rather than Jackson himself). “Don’t Stop Till You Get Enough” seemed a little gimmicky to me, especially given the falsetto throughout; this served as a great radio hit and could be played in clubs as well. Jackson had definitely arrived as a solo performer, which completely changed the dynamic within the family’s main act, The Jacksons.

Cliff Richard, “We Don’t Talk Anymore,” #7, 1/19/80
On the other hand, Cliff Richard’s first hit in Great Britain, “Move It,” was released on August 29, 1958 – the same day Michael Jackson was born. Sir Cliff has been a huge star in the UK for over a half century, with over 130 top 20 disks between the singles, album, and EP charts – but in America, not so much (up until this point, his only top 20 was the 1976 hit “Devil Woman”). This song changed the game a bit. A bit of synthpop (the synthesizer dominated the song, as opposed to guitars), the cheery melody was a stark contrast to the lyric about the end of a relationship, and the singer’s denial of same (“But I ain’t losing sleep/I ain’t counting sheep”). Added as an afterthought to his UK release Rock ‘n’ Roll Juvenile, the song became the title track for the US version, and heralded a period where Richard put nine songs in the Billboard Hot 100 between 1980 and 1983.

Little River Band, “Cool Change,” #10, 1/19/80
A song about getting away from your troubles by getting in your boat and going out on the water – one of two 1980 songs on the theme (although I’m pretty sure Christopher Cross had already recorded his song “Sailing” by the time this one hit the charts). Second top 10 hit from the band’s album First Under the Wire, and their fourth one overall in the United States to this point. Written by lead singer Glenn Shorrock – or, I should say, former lead singer (as some of you may know, the group traveling under the name Little River Band today features precisely zero people who played on this song).

Dr. Hook, “Better Love Next Time,” #12, 1/19/80
Dr. Hook and the Medicine Show arrived with a bang in the early 1970s, mainly riding on the material of songwriter, humorist, and children’s book writer Shel Silverstein (“Sylvia’s Mother,” “The Cover of The Rolling Stone,” etc.). But by the mid-1970s, Silverstein had stopped writing songs – which left Dr. Hook (their new, shortened name) at the mercy of whoever produced the band, since there were no songwriters in the group. As a result, their later output, while hitting higher positions on the singles charts (the two aforementioned songs were their only top 40 hits during the first era) were all by outside anonymous songwriters or remakes – and, to put it less kindly, were the typical soft rock pap you’d think this band would have made fun of early on. “Better Love Next Time” is a good example – nothing special, written by three outside songwriters, missed the top 10 in the U.S. pop chart but made it in the U.K. (and hit #3 on the adult contemporary chart here in the States, their best showing ever).

Jefferson Starship, “Jane,” #14, 1/19/80
On the other hand, “Jane” shows the Jefferson Starship (temporarily) making a move to the other direction. Their big hits over the previous few years – “Miracles,” “With Your Love,” “Count On Me,” and “Runaway” – were all ballads/midtempo songs written for lead singer Marty Balin. (Balin wrote the first two; outside songwriters submitted the others.) But by 1979, Balin was gone (and so was Grace Slick, although she would return in 1981), so with new lead singer Mickey Thomas on board, the band moved back into rock – which is where it had been for a long time under the original name Jefferson Airplane, as well as the early Starship days before Balin came back. “Jane” (cowritten by band members David Freiberg, Paul Kantner, and Craig Chaquico with singer/songwriterJim McPherson) isn’t astonishing, but it showed that the band hadn’t forgotten how to rock – and as a result, it’s still played on classic rock stations (one of the few Jefferson Starship song you’ll hear in that format). Note this video is from 1981, by which time Grace Slick had returned to the group.

Herb Alpert, “Rotation,” #30, 1/19/80
“Rise” was a pleasant surprise for Herb Alpert; it was his first top 40 single in 12 years – in fact, the song hit #1, with a lot of help from its placement in General Hospital, where it was used during a scene showing Luke Spencer raping/seducing/doing something with Laura Webber. (I’ve written more about that song here.) In any case, “Rotation” was the follow-up single, and not dissimilar in sound – a light disco beat and Alpert’s lead trumpet lines. It didn’t do anywhere near as well as “Rise,” but a top 30 single is nothing to sneeze at. All of which meant Alpert would have additional duties at his record label beside overseeing the entire operation.

Suzi Quatro, “She’s in Love With You,” #41, 1/19/80
I’ve never quite figured out why Suzi Quatro didn’t make it bigger in the United States – which, of course, is her home country. She was a much bigger star in the United Kingdom (this was her tenth Top 40 hit there), she’d just had a huge duet hit with “Stumblin’ In,” and her recurring role as Leather Tuscadero on Happy Days certainly made her better known to the public. (It might have helped if she’d actually been able to perform her own songs on the show, but they didn’t really fit the format.) However, “She’s in Love With You” was the second of three consecutive singles to just miss being played on Casey Kasem’s American Top 40, all peaking between #41 and #45.

The Flying Lizards, “Money,” #50, 1/19/80
Another song that became a top 40 hit in ten countries, but not the United States. This was The Flying Lizards’ one major hit single (they did notch a second chart hit in the UK), and it may be the best known of the various versions of “Money,” with a unique reading from lead singer Deborah Evans (although the group was primarily David Cunningham’s creation). The song’s highest chart performance was the #16 version by The Kingsmen, although Barrett Strong’s original version hit #23, and The Beatles’ version certainly has many fans as well.

The Inmates, “Dirty Water,” #51, 1/19/80
A second revival of a 1960s American hit by a contemporary British band, although The Inmates were more of a pub rock group. The original, by California-based band The Standells (although the song is specifically based in Boston), hit #11 in 1966; this version moved the location to London (and switched the Charles River for the Thames). The Inmates probably helped themselves by distributing promo versions to radio stations across the United States, substituting local markets and rivers near them. This was their one and only American hit, but they’re still extent and playing in the UK (although they might want to update their MySpace and record label pages).

Peter Brown, “Stargazer,” #59, 1/19/80
Fifth and final chart hit for the singer-songwriter, who recorded with TK Records (KC & The Sunshine Band’s label), but came from the Chicago suburb of Palos Heights. Unlike most of his other hits, this one’s a slow song. After his recording career ended, he still kept writing (he’s currently collecting royalties thanks to his cowrite on Madonna’s “Material Girl”), but tinnitus ended work in the music industry altogether. He’s now working full time in design and architecture.

Earth, Wind & Fire, “Star,” #64, 1/19/80
Two stars in a row. Perfectly good EWF single, the fourth from their album I Am, that probably didn’t chart higher because radio and record buying might have had enough for a while. (From February 1978 to September 1979 Earth, Wind & Fire put six singles in the top 40, four of which made top 10.) There also might have been a little confusion with their earlier hit “Shining Star,” for that matter. Cowritten by Allee Willis, who has written lots of songs you’ve heard over and over again – “September” and “Boogie Wonderland” for EWF, “Neutron Dance” for The Pointer Sisters, “What Have I Done to Deserve This?” for the Pet Shop Boys and Dusty Springfield, and “I’ll Be There for You,” the theme from Friends.

Jimmy Buffett, “Volcano,” #64, 1/19/80
One of “The Big Eight” – eight songs you will almost always hear at a Jimmy Buffett concert. (The others are “A Pirate Looks at Forty,” “Changes in Latitudes, Changes in Attitudes,” “Cheeseburger in Paradise,” “Come Monday,” “Fins,” “Margaritaville,” and “Why Don’t We Get Drunk [And Screw]” – although the latter has been modified somewhat over the years.) Second single from the album of the same name, this album was his first release for MCA Records; the label had folded up ABC Records, Buffett’s longtime label, in mid-1979 after purchasing it earlier that year. 23rd Street was always on my way.

Jennifer Warnes, “Don’t Make Me Over,” #67, 1/19/80
Remake of the old Dionne Warwick hit (written by Burt Bacharach and Hal David), which became Warwick’s first major chart hit. R&B singer Sybil also made it her first chart hit in 1989 (her second was a remake of the Warwick/Bacharach/David song “Walk On By,” which was one time to the well too many). Warnes’ version is nice, but nothing eye-poppingly different from Warwick’s original. In fairness, Jennifer Warnes isn’t a prolific songwriter, and Arista label head Clive Davis was famous for foisting outside songwriters and remakes on his artists, so there shouldn’t have been any surprises here.

Dollar, “Shooting Star,” #74, 1/19/80
Dollar was a pop duo, Canadian Thereza Bazar and Brit David Van Day, who met when performing for the British pop act Guys ‘n Dolls in the 1970s. Ejected from the band in 1978, they struck out on their own, and subsequently put 14 hits on the British charts over the next ten years – but this is the only one that crossed over into America. It’s a pretty catchy song, and I’m a little surprised they didn’t go further – I’m guessing their record label, Carrrere (distributed by Atlantic) wasn’t able to do enough for them. In any case the duo, who had been romantically involved for a while, became not romantically involved at some point, and broke up personally and professionally in 1983. They’ve had a couple of reunions since then, but it appears the break is now permanent (for those that are still interested).

Breathless, “Takin’ It Back,” #92, 1/19/80
One of several acts to emerge from Cleveland in the late 1970s, Breathless was led by singer-songwriter Jonah Koslen, who’d previously played guitar, sang, and wrote for The Michael Stanley Band. Finding that two songwriters was one too many, Koslen left in 1977 and established his own band, with former Wild Cherry member Mark Avsec. Signing with EMI-America records, they released two albums and gained some popularity in Cleveland, but not much elsewhere. The band broke up late in 1980, with Avsec and drummer Kevin Valentine joining Donnie Iris’ band The Cruisers (Avsec becoming their primary songwriter). Koslen has spent time in the computer gaming industry, released a few other albums solo and with other groups, and briefly reunited with Stanley in the 1990s.

Other Superhits 1980 entries you may or may not enjoy:
Weeks 1 and 2