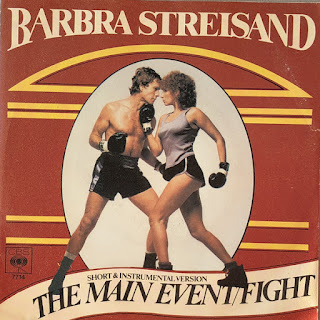 Short week, and not an especially interesting one. It happens.


Streisand goes disco, which wasn’t a bad idea. The Main Event was her 1979 romantic comedy with Ryan O’Neal, with the hopes that lightning would strike twice (the two had starred in the 1972 film What’s Up, Doc?) – financially the movie was a success, critically not so much. Anyway, the soundtrack had three versions of this song – an 11:39 version for club play, the standard 4:54 edit we generally hear today (the single was edited further, coming in at 4:39), and a ballad version. Streisand doesn’t generally perform the song live (it can’t be an easy song to sing, and disco doesn’t generally fit in with her concerts nowadays), but there is a live version on her 1999 album Timeless. Trying to find a decent video for this that I could embed into this text was a chore considering how big a hit it was; I recommend going here for a montage including clips from Streisand performing it live interspersed with movie clips, with the caveat that you might want to be careful about playing it at work. Apparently tiny shorts were a lot more acceptable in this era.


Dr. Hook, “When You’re in Love With a Beautiful Woman,” #6, 8/11/79
Third single from the band’s 1978 album Pleasure and Pain – and/or first single from their 1979 album Sometimes You Win. (I’m sure their fans must have appreciated having the same song appear on two consecutive studio albums, he said sarcastically.) This is such a 1970s song it’s almost impossible to stomach today: apparently when you’re in love with a beautiful woman, she can’t be trusted (“You watch her eyes/you look for lies”), all the guys you know can’t either (“You watch your friends/it never ends”) and everybody’s out to get you (“You know that’s it’s crazy/You want to trust her/Then somebody hangs up when you answer the phone”). Written by Even Stevens, a member of the Nashville Songwriters Hall of Fame (and whose cowritten songs with Eddie Rabbitt, including “I Love A Rainy Night” an “Drivin’ My Life Away,” have stood the test of time far better).

Kiss, “I Was Made for Lovin’ You,” #11, 8/11/79
Kiss’ sorta-kinda foray into disco – apparently Paul Stanley put the basic song together pretty quickly (with singer/songwriter Desmond Child; producer Vini Poncia is also credited) to make a point about how easy it was to write a disco song. (The end result must have pleased their label, Casablanca Records, which was at the forefront of the disco movement in 1979.) Drummer Peter Criss does not play on the song (he was recovering from injuries suffered in a 1978 car accident), so Anton Fig is the unbilled drummer on the track (and for most of the parent album, Dynasty). This would be Kiss’ last top 40 hit until the 1990 ballad “Forever.” They still play it in concert, even though Gene Simmons hates the song.

The Marshall Tucker Band, “Last of the Singing Cowboys,” #42, 8/11/79
This was Marshall Tucker’s first single release on Warner Brothers Records; their previous eight albums (six studio, one half studio half live, and a greatest hits set) had been on Capricorn. Give credit to the band (none of whom was named Marshall Tucker; that was the name of a blind piano tuner who’d rented their rehearsal space in Spartanburg, SC before they got it, and left a key ring behind with his name on it. You probably haven’t heard this one much (“Heard It in a Love Song” and “Can’t You See” get all the classic rock airplay now), but this was actually one of their more successful singles. It’s about a vintage Hollywood cowboy singing on stage – the twist comes at the end, when the old drunk guy is shoved out the door, and the bartender tells the narrator the cowboy was blind – and [SPOILER ALERT] thus didn’t know his audience was just the two of them.

Peaches & Herb, “We’ve Got Love,” #44, 8/11/79
Third single from the duo’s album 2 Hot!, this had neither the propulsive groove of “Shake Your Groove Thing” nor the romantic feeling of ”Reunited.” It’s not a bad song, but disco was definitely winding its way down, and other than the Netherlands (where this song his #14), “We’ve Got Love” didn’t make the grade. Freddie Perren, who produced the duo and cowrote all the songs on 2 Hot!, was one of the original songwriter/producers that formed The Corporation for Motown Records in the early 1970s – he cowrote “I Want You Back,” “ABC,” and “The Love You Save,” among others, for The Jackson Five, and under his own name produced “Love Machine” for The Miracles and cowrote “It’s So Hard to Say Goodbye to Yesterday,” a minor hit for G.C. Cameron on its initial release but later a huge hit for Boyz II Men.

Hot Chocolate, “Going Through the Motions,” #53, 8/11/79
Title song from the band’s 1979 album of the same name, and after the success of “Every 1’s a Winner,” they might have wanted to wait a while longer. Between song titles like this and “Mindless Boogie,” you get the idea that Errol Brown, the group’s leader, was getting a little bored with the whole music thing. Between disco running down (Hot Chocolate was more of a soul/funk band, but those groups were getting lumped into disco as well) and their American label Infinity Records struggling (the label would cease operations a few months after this song peaked), it’s almost understandable that the band felt unneeded.

Posted by Curt Alliaume at 3:11 PM