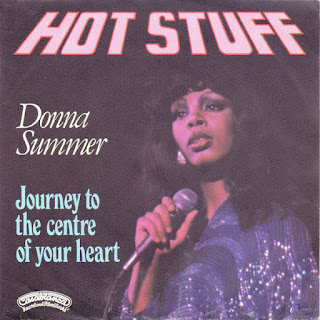 One monster hit, and eight songs you probably haven’t heard in 40 years – if then.

Donna Summer, “Hot Stuff, “#1, 6/2/79
Mammoth hit for Summer off her Bad Girls album; this would hit #1 for three weeks and would be the 7th-most popular song in 1979 overall.  The song hit #1 in four countries overall.  It was still a disco song but had much more of a rock feel than her past releases, thanks to a guitar solo from Jeff “Skunk” Baxter, who had previously been with Steely Dan and The Doobie Brothers.  The song was cowritten by Pete Bellotte (who also coproduced with Giorgio Moroder) with Harold Faltermeyer (best known for “Axel F”) and Keith Forsey (soundtrack work and Billy Idol producer).

Barbara Mandrell, “(If Loving You Is Wrong) I Don’t Want to Be Right,” #31, 6/2/79
Country version of a major R&B by Luther Jackson (his version hit #1 R&B and #3 pop in 1972), and this would be Mandrell’s only pop top 40 hit.  Mandrell has had 38 top 20 country hits overall, however, but despite this song and an NBC variety series in the 1980s, that popularity never really translated to the pop charts.  Mandrell started out young; she played steel guitar for Patsy Cline when she was 13 years old.  One unfortunately note:  it appears the master tapes for this song, along with a lot of other artists on UMG across a wide variety of genres, were destroyed in a 2008 fire.

Thelma Houston, “Saturday Night, Sunday Morning,” #34, 6/2/79
Here’s proof that Motown simply wasn’t getting the songwriting they got in the glory days.  Houston had a #1 single in 1977 with “Don’t Leave Me This Way” (which itself wasn’t generated by Motown songwriters; it was a remake of a Harold Melvin & The Blue Notes song and was cowritten by Gamble & Huff with Cary Gilbert); this was her first top 40 single after that – it took two years and two albums to achieve that.  This sounded nothing like “Don’t Leave Me This Way” and the subject matter isn’t similar, either – the terms “Saturday night, Sunday morning” often refer to what one does the night before attending church services, but the lyrics make it pretty clear religion isn’t a part of the plan.  Anyway, this was Houston’s last chart hit, but she still tours regularly.

Toto, “Georgy Porgy,” #48, 6/2/79
Yeah, the chorus is exactly what it sounds like, which is unfortunately, because the song itself isn’t anything like that.  Sung by guitarist Steve Lukather, the verses tell of a guy who’s clearly besotted with a woman even though he’s not the only guy in her life.  Cheryl Lynn of “Got to Be Real” fame sings the chorus, which is taken from the nursery rhyme of the same name.  Not sure what David Paich (the songwriter and Toto keyboardist) was thinking here – it didn’t really fit any genres – but I wasn’t working for Columbia Records in 1979.  Third and final single from Toto’s self-titled debut. Why didn’t they get Lynn to appear in this video?

Leif Garrett, “Feel the Need,” #57, 6/2/79
It’s unfortunate that the highest-charting version of this song is by Garrett, whose voice is so thin it had to be multitracked on many of the songs he recorded, but that’s the way it goes.  The original version was by The Detroit Emeralds, who recorded it twice – the original version came out in 1972, and a more discofied version (which probably lent itself to Garrett’s remake) made #90 in 1977.  Other remakes have been done by Graham Central Station, Genya Raven, and Bryan Ferry.  For my money, check out Albert King’s blues version on his 1977 LP The Pinch (rereleased in 1992 as The Blues Don’t Change) – it’s available on Spotify. Every video of this song is weird, but this is the oddest – it’s at the Miss Teen USA pageant, introduced by Bob Barker (Barker, Garrett, and a bunch of young women – what could go wrong?).


Eddie Money, “Can’t Keep a Good Man Down,” #63, 6/2/79
Or a mediocre singer-songwriter, apparently.  Second single from Money’s second album Life for the Taking, and his fifth chart single within a twelve-month period – Columbia Records had apparently decided Money was going to be popular if it killed us.  I will say Money got some pretty good players in the studio – among those credited on Life for the Taking are Nicky Hopkins, David Lindley, Gary Mallaber, Greg Phillinganes, Steve Porcaro, Angela Winbush, Lonnie Turner, and Tom Scott.  Unfortunately, the challenge for Money at this point was to come up with new material to match “Baby Hold On” and “Two Tickets to Paradise,” and this just didn’t measure up.

Cheryl Barnes, “Easy to Be Hard,” #64, 6/2/79
I never heard this song during its original release – as you may have noticed, a lot of classic songs were discofied in 1979, and I couldn’t bear the thought of this classic getting the same treatment.  Fortunately, I needn’t have worried – it’s taken from the Hair movie soundtrack (the original version was in the Hair cast album from its 1968 Broadway run, and the definitive version was released by Three Dog Night in 1969, hitting #4), it remains faithful to the original arrangement, and Barnes, who was fairly unknown and was picked to appear in the movie at an open casting call, gives a powerful performance.  This is a song that could use a lot of airplay today – the message resonates.  The video is taken from the movie, and was shot in New York’s Washington Square Park.

Carrie Lucas, “Dance With You,” #70, 6/2/79
Okay, back to the disco.  This was Lucas’ second and final pop hit, following up on the 1977 song “I Gotta Keep Dancin’,” which hit #64.  Lucas was married to Dick Griffey, who helmed SOLAR (Sounds of Los Angeles Records), a label that came out of Don Cornelius’ Soul Train label (good thing Cornelius bailed out, that sort of thing was frowned upon when it came to legal matters in that era).  Lucas and Griffey were married from 1974 until his death in 2010, so it wasn’t like a Mariah Carey-marries-her-label’s-president type of thing.  Lucas had four R&B chart hits in the 1980s, and released a standalone single, “Some Things Never Change,” in 2018.

The Babys, “Head First,” #77, 6/2/79Second and final single from the band’s album, also titled Head First, this was the first flat-out rocket Chrysalis released for The Babys in a few years.  (I wouldn’t call either “When I Think of You” or “Isn’t It Time” flat-out rockers – they’re more like carbon copies of each other.)  Only three members of the band were represented on this song – singer/bassist John Waite, guitarist Wally Stocker, and drummer Tony Brock.  Michael Corby played keyboards on five of the nine songs on Head First, but ejected from the band during the recording sessions.  Jonathan Cain and Ricky Phillips were added to the band when the band began touring the album.  This is introduced by The Raes, who we saw in week 5.