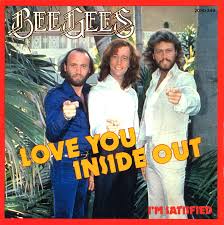 Seventeen songs this week, which is a lot. Separating the wheat from the chaff isn’t easy.

The Bee Gees, “Love You Inside Out,” #1, 6/9/79
Third and final #1 single from their Spirits Having Flown album, and ninth and final single for the band overall – at least in the United States. (They did hit #1 with 1987’s “You Win Again” in five countries, but the U.S. wasn’t one of them.) Described in Wikipedia as a “slow funk groove number,” which proves what Abraham Lincoln said about the internet was right. It’s an okay song (and probably gets the most airplay nowadays of the Spirits Having Flown singles, as “Tragedy” isn’t their best disco song and “Too Much Heaven” isn’t their best ballad), but nothing special. Actually, this would be the band’s last top 20 single in the United States for over ten years.

Olivia Newton-John, “Deeper Than the Night,” #11, 6/9/79
Second single from Newton-John’s Totally Hot album, and while it wasn’t nearly as successful as “A Little More Love” (it didn’t hit the top 20 anywhere except the United States and Canada), it’s okay. The result of having two hits singles made Totally Hot her second-biggest studio album ever in the United States (behind Physical; Xanadu and Grease don’t count as they were movie soundtracks). Cowritten by Tom Snow, who also wrote “Make a Move on Me” for Newton-John and cowrote “You Should Hear How She Talks About You” for Melissa Manchester.

GQ, “Disco Nights (Rock Freak),” #12, 6/9/79
More disco, but this one had some staying power – partially because of the chant during a middle break that gave the song its subtitle. GQ had been around awhile; they started out in 1969 as Sabu & The Survivors, and recorded one album in 1976 as The Rhythm Makers. The band has nothing to do with the magazine of the same name; in this case “GQ” stands for “good quality.” It’s a pretty great song, and it’s unfortunate the band didn’t stay in an uptempo direction – most of their single releases after this were ballads. Coproduced by Larkin Arnold, who would executive produce Marvin Gaye’s Midnight Love album in 1982.

Styx, “Renegade,” #16, 6/9/79
Here’s an economical way to rack up a hit single: when your previous single flops, have DJs flip it and play the B-side. Apparently “Renegade” was getting more attention than “Sing for the Day” did, so A&M rereleased the song as an A-side, and it became Styx’s fourth top 20 hit. Written and sung by Tommy Shaw (who also wrote and sang “Blue Collar Man” and “Sing for the Day” from the 1978 album Pieces of Eight). Despite it being Shaw’s song, he gave the solo to James Young. Milwaukee Brewers relief pitcher Josh Hader now uses this song when he walks in from the bullpen to enter a game.

Foxy, “Hot Number,” #21, 6/9/79
Second and final pop hit for this band, which had hit the top 10 in the fall of 1978 with “Get Off,” from their second album of the same name. This one was sorta kinda also a title track (their third album was Hot Numbers), and it’s perfectly catchy, but somewhat less risqué than “Get Off.” The band, which started as a five-man Latin and disco-influenced group from Hialeah, Florida, began to shuffle around members after this release, and broke up at the end of 1980. Singer/guitarist Ish “Angel” Ledesma later found success with Oxo (“Whirly Girl”) and Company B (“Fascinated”), while Carlo Driggs became the lead singer of Paul Revere & The Raiders from 1983 through 2004. The video comes from The Merv Griffin Show.

Rod Stewart, “Ain’t Love a Bitch,” #22, 6/9/79
Good news: there isn’t a hint of disco in this followup to “Da Ya Think I’m Sexy.” Bad news: I’m sure the title kept a few radio stations from putting this on their playlists. (Yes, Elton John hit the top five with “The Bitch Is Back,” but in that case “the bitch” was Elton himself.) Stewart seems to be blaming others for his problems in love (Maggie May makes a return appearance here, and I’m pretty sure the lyrics vaguely refer to Britt Ekland). Not sure why Stewart’s then-love, Alana Hamilton, agreed to appear on the sleeve of the single. YouTube and Blogger decided they didn’t want me to embed this video (because of the title); here’s a link to one version.

Alton McClain & Destiny, “It Must Be Love,” #32, 6/9/79
Semigeneric disco from a three-woman group that formed in Los Angeles. This song, and the group’s debut album of the same name, was produced by veteran Motown songwriter and producer Frank Wilson (who wrote, cowrote, or produced such songs as “You’ve Made Me So Very Happy,” “All I Need,” “Love Child,” “Up the Ladder to the Roof,” “Keep On Truckin’,” and lots more). This has a gospel feel, which isn’t much of a surprise – McClain would later turn to gospel music after this turned out to be the group’s only hit, while Wilson would eventually become a minister. The group broke up after being dropped by Polydor Records in 1981, but Destiny (Robyrda Stiger and Delores Marie "D'Marie" Warren) would become part of the group Krystol in the 1980s; Warren would die in an automobile accident during recording of the group’s second album.

Nigel Olsson, “Little Bit of Soap,” #34, 6/9/79
Second and final single from Olsson’s album Nigel. Released on Bang Records, the song was written by Bert Burns, who had founded the label over a decade before (this is probably not a coincidence; Burns’ widow Ilene ran the label until it was purchase by Columbia Records in the 1980s, and still owns the music publishing company). Anyway, this is a synth ballad without much hint of Olsson’s talent as a drummer. Olsson was Elton John’s drummer up until the late 1970s, and has been with him on and off since then (he is playing with Elton now on his current farewell tour).

The Beach Boys, “Good Timin’,” #40, 6/9/79
After The Beach Boys’ foray into disco, “Here Comes the Night,” proved an utter disaster (see week 14 for details), the group went back to the tried and true for their second single: a harmony ballad. Cowritten by Brian and Carl Wilson, this was originally written in 1974 and intended for their 1976 album 15 Big Ones, but was left off at that point. Not a gigantic hit by the band’s standards (although it was their highest-charting single since 1976’s “It’s OK”), this has become a concert standard for the Brian Wilson version of the group (it was included in the 50th anniversary reunion tour). Interesting footnote: the B-side, “Love Surrounds Me,” features backing vocals by Christine McVie of Fleetwood Mac, who was dating Dennis Wilson at the time.

Roxy Music, “Dance Away,” #44, 6/9/79
Oh good, just the band you’d want to hear jump into disco. For what it’s worth, Bryan Ferry put his own mannered stamp on this semidanceable song (I don’t think any hardcore discos played this), so it was recognizable as a typical Roxy Music song. The band had just reunited after a long hiatus, with Bryan Ferry, Andy Mackay, Phil Manzanera, and Alan Spenner; musicians Richard Tee (George Benson, Paul Simon), Rick Marotta (Steely Dan, Hall & Oates), and Steve Ferrone (Average White Band, Tom Petty & The Heartbreakers) were also on the recording. Bryan Ferry originally wrote this song for his first solo album, In Your Mind. This is from a BBC broadcast; they’re introduced by Anni-Frid Lyngstad and Agnetha Fältskog of Abba.

Liquid Gold, ”My Baby’s Baby,” #45, 6/9/79
Not-quite one-hit disco wonder here in the United States, Liquid Gold was a four-person band from Brackley in Northamptonshire, England, that found some success in their native country (seven chart hits there, including the #2 “Dance Yourself Dizzy” in 1980). Here in the States, however, they were on Parachute Records (yet another Casablanca subsidiary), and their album had a true frightening cover showing a woman’s face drenched in, you guessed it, liquid gold. All of which didn’t overcome a decent but not spectacular song about discovering the person you’re nuts about is nuts about you, too. They would eventually have a second American hit, but not until 1983.

Saint Tropez, “One More Minute,” #49, 6/9/79
The hardest part of writing these song profiles up is easily finding enough to say about one-shot disco acts. Saint Tropez was brought to us by producers Laurin Rinder and W. Michael Lewis, the brains behind 1978 one-hit wonders El Coco (“Cocomotion”) and Le Pamplemousse (“Le Spank”). Saint Tropez was made up of an ever-changing lineup of three women, with “One More Minute” being their only chart hit on Butterfly Records, which closed up shop in 1980. Two years later, Saint Tropez would come back with two further albums on Destiny Records before shutting down for good.

The Rockets, “Can’t Sleep,” #51, 6/9/79The Rockets had been around awhile before they hit the charts, with two band members – guitarist Jimmy McCarthy and drummer Johnny “Bee” Badanjek – originally working together in the 1960s as part of Mitch Ryder & The Detroit Wheels.  “Can’t Sleep” was the first single off their second album, Rockets, which was also called Turn Up the Radio in some territories. Most of the songs on this album were written by Badanjek, with Johnny Sandlin (who also produced The Allman Brothers Band’s Brothers and Sisters and Win, Lose or Draw) for RSO Records (which made most of their money off Bee Gees releases and probably didn’t know what to do with a hard rock band).

Claudja Barry, “Boogie Woogie Dancin’ Shoes,” #56, 6/9/79
Second and final chart hit for Barry, who hit #72 with “Dancin’ Fever” in 1978.  Electronic, ode to dancing, and utterly annoying and forgettable (sorry, Claudja, if you’re reading this). Born in Jamaica but raised in Ontario, Barry has maintained a presence in the recording scene (she released “You Make Me Feel” with The Relight Orchestra last year; it’s available on Spotify), and has appeared in several movies, including 1985’s Rappin’ with Mario Van Peebles and Kadeem Hardison.

Space, “My Love Is Music,” #60, 6/9/79
Yeah, big deal – most people love music (otherwise they wouldn’t be reading this). The most interesting thing about one-hit wonder Space (a disco act from France) is the lead singer was Madeline Bell, who has sung backup with Joe Cocker, The Rolling Stones, and Elton John, and hit #26 on her own with a remake of The Supremes and The Temptations “I’m Gonna Make You Love Me.” This disco song was originally released in the UK on Pye Records, Casablanca (no surprise) picked it up for American release.

Rick James, “Bustin’ Out,” #71, 6/9/79
Judging by the catalog numbers, this was issued pretty quickly by Motown after it became clear “High On Your Love Suite” wouldn’t be the hit that James’ “You and I” had been the previous year. It’s most of a classic James single (references to getting stoned, freaking when he’s home, etc.), but it didn’t cross over to the pop charts. Although the parent album Bustin’ Out of L Seven charted about as well as James’ official 1978 debut Come Get It, he wouldn’t really find his sound again until 1981’s Street Songs with the hits “Give It to Me Baby” and “Super Freak.” I apologize for the terrible video quality.

Bob Welch, “Church,” #73, 6/9/79
Second and final chart hit from Welch’s album Three Hearts. This is a slinky midtempo tune dominated by keyboards (odd, since Welch himself only played guitar and bass) appealing to a woman who’d been hurt in a previous relationship. Not a bad song, but Capitol Records might have been better off making the rocker title track the second single after “Precious Love,” rather than the reverse. That was it for Welch on the Hot 100 – four subsequent albums on two labels yielded no hits, and after a brief brush with drug addiction, Welch moved to Nashville, contributed to soundtracks and occasionally recorded on minor labels. He committed suicide June 7, 2012, after learning the spinal surgery he’d undergone three months before hadn’t been successful and he would be partially paralyzed.