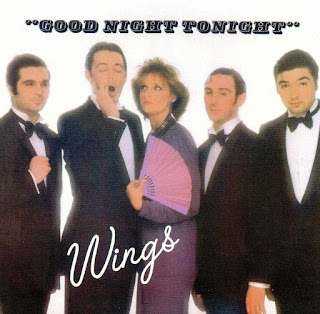 By Curt Alliaume
Okay, I promise I’m going to catch up.  Three top 10 hits this week, and a few interesting songs you probably haven't heard in a long time.

The Village People, “In the Navy,” #3, 5/19/79
Another major hit for The Village People, again taking aim at an American institution. (The United States Navy was apparently okay with it at one point – according to The Guardian, a deal was struck to use the song as a recruitment theme before the Navy reconsidered.) This was the third (and last) top 40 hit for The Village People within twelve months. This came from the album Go West, the band’s fourth album in 21 months, which went top 10 in eleven countries – the album sold over one million copies in the United States.

Wings, “Goodnight Tonight,” #5, 5/19/79
This one was bemoaned by piles of rock fans who were convinced Paul McCartney had gone disco. You can dance to it, all right – but the same was true of “Listen to What the Man Said” and “Silly Love Songs,” and nobody freaked out about either of those songs. (And the opening guitar parts are more influenced by flamenco music than anything else.) Anyway, this was a big deal for two reasons (and not because it’s inconsistently listed as “Goodnight Tonight” and “Good Night Tonight”:  first, it was the band’s first release on Columbia Records after being on Capitol since the early 1970s – in fact, it was Paul’s first release away from Capitol in America since before The Beatles hit it big (a few of their early releases had been fobbed out to minor labels like Vee-Jay and Tollie). Second, it was a standalone single – Paul determined the song didn’t fit the concept of the upcoming album, Back to the Egg (nor did its B-side, “Daytime Nighttime Suffering”). This may not have helped the album’s overall sales; Back to the Egg charted lower in virtually every country than 1978’s London Town except Canada, where they were sold at a discount with 20-packs of Timbits. (I kid.)

The Jacksons, “Shake Your Body (Down to the Ground),” #7, 5/19/79
Huge hit for the band – this was their biggest single since “Enjoy Yourself” hit #6 in 1976, and this pushed the album Destiny to #11 on the Billboard album chart and #3 on the R&B album chart, their highest placement since 1972’s Lookin’ Through the Windows. (The album was their first platinum album, but that’s partially because Motown Records didn’t participate in the RIAA certification system.)  This is pure dance music, with a great vocal by Michael. The song was written by Michael and Randy Jackson (seven of the eight songs on Destiny, excluding “Blame It on the Boogie,” were written by one or more members of the group), and for the first time, the band was allowed to produce themselves.

Chris Rea, “Diamonds,” #44, 5/19/79
It was probably a little early for Rea to release a follow-up album to 1978’s Whatever Happened to Benny Santini? In the United States, as his biggest American hit, “Fool (If You Think It’s Over),” had peaked at #12 in September of 1978. But since his new album, Deltics, was ready in early 1979, out it went. This has more of a pop feel than Rea’s later blues-based British hits, with a string section as well. Produced by Gus Dudgeon, who produced many of Elton John’s classic albums. (Side note: I like Chris Rea a lot – I have three of his albums and a two-CD greatest hits set that I believe was only sold in the UK – and I wish there was more to say about this song, which is pretty good but just didn’t hit here.)

Journey, “Just the Same Way,” #58, 5/19/79
I don’t understand the logic here. Columbia Records was pretty insistent on having a different lead singer than Gregg Rolie for the band, which was why Steve Perry was brought in after Journey’s first three albums had minimal sales. The result was 1978’s Infinity yielded three chart hits, two of which have become standards for the band (“Wheel in the Sky” and “Lights”). So what does the label do for the first single from the new album, Evolution? They release the one song with Rolie on lead vocal (Perry does harmony on the choruses). I’m not a big Steve Perry fan and it’s a pretty good song, but from a sales standpoint, there’s little logic here.

Cheryl Lynn, “Star Love,” #62, 5/19/79
It’s always a struggle coming up with a follow up to the first big hit. Columbia Records could have picked a couple of ballads from Lynn’s first album (“Come In From the Rain,” originally written and performed by Melissa Manchester, or “Daybreak (Storybook Children),” which had been a minor hit for Bette Midler in 1978), or any one of several songs Lynn wrote, but they went with a disco cut, contributed by songwriters John Footman and Judy Weider. It did make top 20 on the R&B charts and had charted on the disco chart as the B-side of “Got to Be Real,” but it didn’t push Lynn’s career to the next phase.

Fabulous Poodles, “Mirror Star,” #81, 5/19/79
How many teenage boys lived this storyline in the late 1970s? Geeky boy, lousy at sports and shunned by classmates, lives a rock & roll life in his own room that nobody sees. (That might have been me, except I didn’t play guitar, and my mirror was too small for that kind of thing.) The Fabulous Poodles (some times referred to as Fab Poos) worked with the right people – their first album was produced by John Entwistle of The Who (who also played bass on a few songs) while “Mirror Star” was produced by Steve Winwood’s brother Muff. Epic Records combined the first two British albums into one (called Mirror Stars, which probably wasn’t meant to be confusing but certainly turned out that way, as Billboard listed the song as “Mirror Stars” on the Hot 100 throughout its run) for the American market, perhaps thinking this would be a power pop/New Wave version of The Who or The Kinks (“Mirror Star” sounds very much like something Ray Davies or Pete Townshend would have written during the British Invasion). But since The Who and The Kinks were both around in 1979, The Fabulous Poodles didn’t hit as big as hoped, and broke up after their third album. They left behind one great song in this one, though. This was taken from a Peter Cook special recorded in 1978, Cook does the introduction.