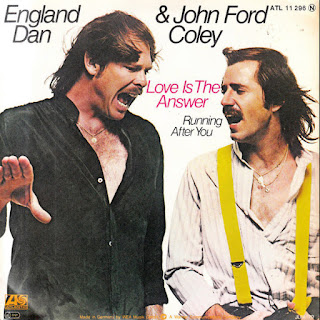 By Curt Alliaume
No huge hits this time around, but a few that most people will remember.

England Dan & John Ford Coley, “Love Is the Answer,” #10, 5/26/79
When Bob Shannon was on WCBS-FM radio in New York, he did an occasional spot called “First and Foremost” – the original version of a song, and the one that became a big hit. Here’s a good example. “Love Is the Answer” was originally recorded by the band Utopia, and released on their 1977 album Oops! Wrong Planet, but it didn’t chart. Two years later, Dan Seals and John Coley dusted it off, smoothed down the rough edges, and covered the song, making it their final top 40 hit. Utopia (led by Todd Rundgren) has used the song in their set list for years, generally to close concerts. The song has also been covered by Christian artists, and most notably in 2004 by Glen Campbell as the title track of Love Is the Answer: 24 Songs of Faith, Hope and Love.

Orleans, “Love Takes Time,” #11, 5/26/79
Third and final top 15 hit for this band, whose name reflected their original interest in Louisiana-based music, but formed in Woodstock, New York (although three of the five original members were previously based in Ithaca, NY). By 1979, founder John Hall had left the band (he would organize the No Nukes concerts later that year, and would later become a member of the U.S. House of Representatives from Dutchess, Orange, Rockland, and Westchester counties in New York), but brothers Lance and Larry Hoppen slogged on with new members and a new label, Infinity. This pop-rock gem, cowritten by Larry Hoppen and Marilyn Mason (who is neither the actress nor the concert organist) became Infinity’s biggest hit until Rupert Holmes’ “Escape (The Pina Colada Song)” – by which time the label had been folded into MCA. Orleans recorded a few additional albums but had no further hits. But they’re still around today, with John Hall back with the band along with Lance Hoppen – they’re touring this summer.


Billy Joel, “Honesty,” #24, 5/26/79Third and final chart hit from Joel’s 52nd Street album, this is a piano ballad which might have yielded hopes the song would become a standard. It didn’t, but it’s an okay song – even though in its ranking of Joel’s songs, New York magazine’s Vulture section noted “I kinda like this one, but it does feel like a song a lot of people could have written.” The song received a Grammy nomination for Song of the Year, but lost to The Doobie Brothers’ “What a Fool Believes.” Joel won Album of the Year and Best Pop Vocal Performance, Male, so he probably wasn’t too upset.

Tycoon, “Such a Woman,” #26, 5/26/79
One-hit wonder band that yielded a pretty good rocker off its self-titled debut album, released on Arista Records. It’s almost unbearably sexist (“All through the night, she’s there/Just to treasure his love/That’s the life, high on the pleasure of love”), which in 1979 probably wasn’t that surprising. Produced by Robert “Mutt” Lange (and there’s a guy who, having written “All I Wanna Do Is Make Love to You” for Heart and had an affair with the best friend of his wife Shania Twain, didn’t have any problems with women whatsoever). The band broke up in 1983; saxophonist and backup singer Mark Rivera has been with Billy Joel’s band since then, and has also played with Ringo Starr, Elton John, and Hall & Oates. This is taken from Popclips, a music video program that used to run late on Saturday and Sunday nights on Nickelodeon, before MTV started.

Bob Seger & The Silver Bullet Band, “Old Time Rock & Roll,” #28, 5/26/79
I guess the surprise here is this song wasn’t that big a pop hit on its initial release, even though it’s been a classic rock mainstay for decades. Seger actually performed the song for the album Stranger in Town with the Muscle Shoals Rhythm Section of Barry Beckett, Pete Carr, Jimmy Johnson, David Hood, and Roger Hawkins, rather than the Silver Bullet Band (despite the billing, Seger had always done a few songs off every album with that backing band during his peak years in the 1970s and 1980s). There’s some debate about the songwriting credits – Seger claims, despite the writing being credited to Thomas E. Jones and George Jackson, that he rewrote the verses but didn’t take credit, but Malaco Records executive George Stephenson said it’s Jackson’s song on his own. Anyway, the song has been covered extensively and used in lots of movies and TV shows, which led to a renaissance a few years later.

Frank Zappa, “Dancin’ Fool,” #45, 5/26/79
As you might guess, this is a parody of disco – Zappa, of course, was given to that kind of thing. In this case, however, the joke is that the protagonist is an awful dancer, with no sense of rhythm and one leg shorter than the other (which Zappa himself suffered from, after a fall from a stage, followed by a fight with a concertgoer, in England), and big feet. Anyway, this was probably played frequently on AOR stations, and almost never on disco stations (even though it fit the format), because it was an indirect attack on club dancers. From Zappa’s album Sheik Yerbouti, his first authorized release since 1976’s Zoot Allures (three subsequent studio albums, which were to be part of a three-LP set named Läther, were released by Warner Brothers without Zappa’s approval), which made it to #21 in the United States and went top 10 in four countries in Europe.

Narada Michael Walden, “I Don’t Want Nobody Else (To Dance With You),” #47, 5/26/79
More disco, but I will say Walden became one of the mainstays of the music business in the 1980s as a producer and songwriter. This was Walden’s first pop hit from his third album, Awakening, released on Atlantic Records. Walden is primarily a drummer, but also played some keyboards on this album. He was given the name Narada by his guru, Sri Chimnoy, who was also guru to Carlos Santana, guitarist John McLaughlin, Roberta Flack, and Clarence Clemons. (Santana did a guest appearance on the Awakening album.)

Santana, “One Chain (Don’t Make No Prison),” #59, 5/26/79
Speaking of Carlos Santana, he was doing the disco thing as well. “One Chain,” from Santana’s album Inner Secrets, was written by Dennis Lambert and Brian Potter, and originally recorded by The Four Tops for their 1974 album Meeting of the Minds – it made #41 pop and #3 R&B for them. (In an amazing coincidence, Lambert and Potter also produced Inner Secrets as well. Yes, that was sarcasm.) This isn’t a bad song, but it needed a better singer than Greg Walker to make it something special like the original version (very few people could outsing Levi Stubbs).

Witch Queen, “Bang a Gong (Get It On),” #68, 5/26/79
Yet another disco remake, this one of T. Rex’s 1971 classic “Get It On” (which was renamed “Bang a Gong (Get It On)” in the United States to avoid confusion with the band Chase’s different song “Get It On”). Anyway, this is the least-known version of this song (The Power Station hit #9 with the song in the summer of 1985, by which time lead singer Robert Palmer had departed the group), and the most nauseating – Witch Queen was a studio group on Roadshow Records, an independent label distributed by five different records companies (Scepter, Columbia, United Artists, Ariola America, RCA) during its existence between 1972 and 1980. And you can make a music video with cheesy special effects and a lot of dry ice.

Taka Boom, “Night Dancin’,” #74, 5/26/79
Standard-issue disco courtesy of Ariola America Records, an offshoot of a German label that never really found a lot of success in the States other than with Amii Stewart and a few other disco acts. This is Taka Boom’s one and only chart hit (and it appears to be out of print), but she’s more interesting for her background. Her real name is Yvonne Stevens – her brother Mark was with the band Aurra at one point (they hit #71 in 1982 with “Make Up Your Mind”), and her older sister Yvette is better known as Chaka Khan (you get the naming convention now?), who had great success with Rufus and on her own (“I Feel for You,” “I’m Every Woman”). Boom has a few songs available for download on iTunes, on her own and with both her brother and sister.

The Tarney/Spencer Band, “No Time to Lose,” #84, 5/26/79
Okay, no more disco for a while; this is a fairly generic-sounding pop rocker. Trevor Spencer was the band’s drummer, and Alan Tarney handled lead guitar, bass, and lead vocals. This would be their only hit – although it wouldn’t be the band’s only time on the charts (more on that much later). Tarney, who had already been working with Cliff Richard as a backing musician, gained greater success later in the year when his song “We Don’t Talk Anymore” was tacked onto Richard’s Rock ‘n’ Roll Juvenile at the last minute; the song wound up hitting #1 in the UK and Ireland and #7 in the United States (where Richard’s album was retitled We Don’t Talk Anymore). Tarney would write and produce much of Richard’s 1980 album I’m No Hero (including the top 10 hit “Dreaming”) as well.

Bill Wray, “Pinball That’s All,” #96, 5/26/79Another pop rocker, this one from the soundtrack for Brooke Shields’ 1979 movie Tilt, about, you guessed it, pinball. (If you can buy Shields, who was 13 at the time the movie was made, as a pinball hustler, that is.) The movie was barely released at first, then got a little bit more promotion later on (by which time Shields had undergone a growth spurt and was considerably taller than she appeared in the movie, which made promotion awkward), and the single never took off at all. Still, Shields was happy about the movie; as quoted in IMDB, she said “No matter how many movies I make, not matter who I work with, Tilt will always be something very dear to me. Everyone, everything from Tilt I'll treasure.”