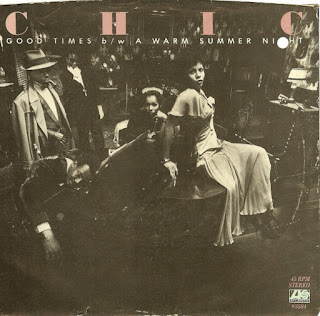 Chic, “Good Times,” #1, 8/18/79
And this is it. It was only at the top for one week (in between Donna Summer’s “Bad Girls” and [SPOILER ALERT] The Knack’s “My Sharona”), but it’s such a great song. Appropriate for the times—things are screwed up (it was the summer of 1979, when the second oil/gas crisis was at its peak and inflation was out of control), so we might as well have fun while we can. Written and produced by Nile Rodgers and Bernard Edwards, the song became a cottage industry, with several other songs imitating it either directly (“Rapper’s Delight” by The Sugarhill Gang, where Rodgers and Edwards got a cowrite credit) or indirectly (“Another One Bites the Dust” by Queen, “Bounce, Rock, Skate, Roll” by Vaughan Mason & Crew, “This Is Radio Clash,” by The Clash, even “Need You Tonight” by INXS). It’s almost a standard nowadays. And while I’m usually not happy to run the long version of songs on these posts, I’m happy to here, because the middle break demonstrates, piece by piece, how each instrument is layered onto the main melody line.


Raydio, “You Can’t Change That,” #9, 8/18/79
Another great song, this one hit #3 on the R&B chart (behind, not surprisingly, “Good Times”), as well as making the top 20 in five other countries. This isn’t typical disco (with its rhythm track, it’s not even particularly danceable), and unlike most Ray Parker Jr. songs (Parker was the leader of Raydio initially before striking out on his own), there’s no double entendres or annoyance at being let down by a woman—he’s hers, no matter what. Still sounds good on the radio (no pun intended) today.

Joe Jackson, “Is She Really Going Out With Him?”, #21, 8/18/79
This was probably the second major British New Wave hit in the United States, behind The Police’s “Roxanne” (hard to believe, but Elvis Costello didn’t chart on the Billboard Hot 100 until 1983’s “Everyday I Write the Book”). Jackson (whose real first name is David, not Joe) started out with the British pub rock band Arms and Legs in the mid-1970s, but after that group broke up, he developed his own style, and signed with A&M Records for a solo deal in 1978. Look Sharp!, his debut album, released in January 1979, eventually getting certified gold in the United States. “Is She Really Going Out With Him?”, of course, is a lament about the singer’s ex (or exes, or women he knows) dating guys who look, to him, ugly. Too bad this was released before the video era; it would have been interesting to see Jackson’s interpretation of his own song, which he says has been misinterpreted more than one would think.

The Jones Girls, “You Gonna Make Me Love Somebody Else,” #38, 8/18/79
I guess The Jones Girls were intended to be Gamble & Huff’s answer to Sister Sledge, or something like that, but it didn’t quite happen. Brenda, Shirley, and Valorie Jones (all sisters) had been doing backup work for Kenny Gamble and Leon Huff for Philadelphia International artists like Lou Rawls and Teddy Pendergrass, as well as other R&B artists. In 1978 Gamble and Huff signed them to their label and produced their first three albums. And this is their hit—it’s definitely catchy, but not a standout, and probably got some backlash from the “disco sucks” crowd. They’d release six albums in all and charted nine R&B hits between 1979 and 1983, but this is the only one that would cross over. Shirley is the only one of the three sisters still living, and she performs as “The Jones Girls” with members of her family.

Olivia Newton-John, “Totally Hot,” #52, 8/18/79
This was the title track and third single from Newton-John’s 1978 album, and it showed that, while she had proven on the Grease soundtrack she could do up tempo tunes, she’s not a belter. (At one point late in the song she starts shrieking, which simply isn’t her forte.) Belgium did make this a top 20 hit (those crazy Belgians must have known something America didn’t). Not her best song in my opinion, but I guess she gets some points for trying something different.

Hotel, “You’ve Got Another Thing Coming,” #54, 8/18/79
This was the second of three chart hits for Hotel, a six-man pop/rock group with a few country overtones out of Birmingham, Alabama. Not to be confused with Judas Priest’s similarly titled metal hit of the same name, this is an up tempo song that shows off the group’s harmony vocals. This comes from the band’s first album for MCA Records, Hotel, also released in 1979 (their previous chart hit, “You’ll Love Again,” was released as a standalone single in 1978 on Mercury).

Five Special, “Why Leave Us Alone,” #55, 8/18/79
This is the five-man band’s one and one chart hit, and I will say it’s pretty awesome. Not necessarily because of the vocals (lead singer Bryan Banks was the younger brother of The Dramatics’ Ron Banks, and his tenor is pleasant but a little thin), but the groove and arrangements are fine. Ron Banks cowrote the song with Tony Green and Raymond Johnson (they did the string arrangements too), and produced it as well, with Wayne Henderson (best known as trombonist for The Crusaders during their early years) as executive producer. A good thumper for the dance floors, but Five Special didn’t find the handle outside this early hit, and broke up two years later after three unsuccessful albums on Elektra—which are all available for download.


Blackjack, “Love Me Tonight,” #62, 8/18/79
This marked the first chart appearance of Michael Bolton (for better or for worse. Bolton had released two solo albums previously under his given name of Michael Bolotin, and after he was (apparently) dropped by RCA Records, he joined forces with Bruce Kulick, who had been on the road backing Meat Loaf during his Bat Out of Hell tour (and would later become lead guitarist for Kiss between 1984 and 1996). They formed Blackjack with bassist Jimmy Haslip and drummer Sandy Gennaro, and got a record deal from Polydor Records. Despite having veteran producer Tom Dowd (Allman Brothers, Rod Stewart) helming their first record, this was their only chart single, and the band called it quits after their second album release in 1980 went nowhere.

Flash & The Pan, “Hey, St. Peter,” #76, 8/18/79
Not to be confused with the concurrent Sniff ‘n’ The Tears, Flash & The Pan was the songwriting/production duo of Harry Vanda and George Young, who had been working together for years (they notched 15 top 40 pop hits in their native Australia as part of The Easybeats in the 1960s, including the brilliant worldwide hit “Friday on My Mind”), as well as producing AC/DC’s first five albums (featuring Young’s younger brothers Malcolm and Angus), and producing and writing “Love Is in the Air” in 1978 for the (unrelated) John Paul Young. Anyway, “Hey, St. Peter” was their first hit as the self-contained new wave group Flash & The Pan (which meant they couldn’t tour much, since it was just the two of them), which made the top 10 in Australia, as did the follow up, “Down Among the Dead Men.” “Waiting for a Train” would make the UK top 10 in 1982, so Flash & The Pan wasn’t just… well, you know. George Young died in 2017 at the age of 70, three weeks before his brother Angus.

Patti Smith Group, “Frederick,” #90, 8/18/79
Second and final chart hit for Patti Smith (the one Gilda Radner parodied as Candy Slice of on Saturday Night Live, not the one in the video for “The Warrior”), and this is a love song to her then-boyfriend, Fred (Sonic) Smith, who had been the guitarist for MC5. This comes from the album Wave, and was produced by Todd Rundgren. Smith and Smith married (and yes, there were jokes about her not having to change her name) in 1980 and had two children. Fred died of a heart attack in 1980. Patti still records (her most recent album, Banga, hit #57 in 2012), and won a National Book Award for her memoir Just Kids.

Posted by Curt Alliaume at 9:03 AM