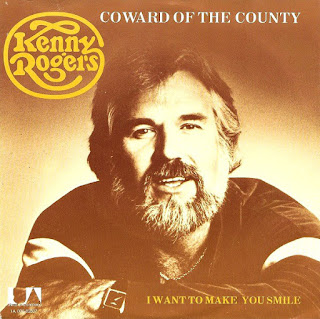 A few songs you’ll surely be familiar with, in several genres.

Kenny Rogers, “Coward of the County,” #3, 1/26/80
Story song from Rogers, about a young man who walked away from all opportunities to fight, based on his dying father’s request (his father was imprisoned, and thus knew of what he spoke)—until bullies roughed up his girlfriend. This would one of Rogers’ biggest hits, bested only by “Lady” and his duet with Dolly Parton, “Islands in the Stream.” #1 on Billboard’s country chart, this would also hit #1 in Canada, the United Kingdom, and Ireland. Cowritten by Roger Bowling and Billy Ed Wheeler, all parties denied that “The Gatlin boys” (the villains of the song) were in any way related to country stars Larry Gatlin and The Gatlin Brothers—although Larry Gatlin noted in a 2016 podcast Bowling apparently had a vendetta against him.

Prince, “I Wanna Be Your Lover,” #11, 1/26/80
First major pop hit for Prince (who had edged onto the Hot 100 in 1978 at #92 with “Soft and Wet”), this has a great groove, and although Prince’s falsetto vocal annoyed me like crazy at the time, I learned (as did many others) it wasn’t going to be a regular feature in his music (we’d had enough of The Bee Gees the previous year). Prince did everything on this recording (singing, all instruments, production, and engineering). It’s thought Prince wrote this song for singer Patrice Rushen (either to perform or to indicate he had a little crush on her).

Daryl Hall & John Oates, “Wait for Me,” #18, 1/26/80
This was awkward: when Hall and Oates were recording this song’s parent album, X-Static, in the summer of 1979, disco was still hot—but not when the album was released. Accordingly, the first single became “Wait for Me,” which isn’t quite a ballad, but has a slower beat (which sounds oddly like horse’s hooves) keeping the song moving. It really isn’t much (their previous top 20 hit, 1978’s “It’s a Laugh,” was much better), but it still works. Written by Hall, produced by David Foster, with Jerry Marotta (who was with Orleans and Peter Gabriel’s band around that time) on drums. Hall and Oates made a ton of videos for X-Static, and since it was very early in the video era, they’re a little rough.

Foghat, “Third Time Lucky (First Time I Was a Fool),” #23, 1/26/80
Not one of Foghat’s better hit songs, in my opinion (I’d take “Slow Ride” or “Fool for the City” first), but it found an audience with disaffected rock and boogie fans to become the band’s second-biggest hit in the States. I’m not that familiar with the band’s albums (I only have two greatest hits sets), but AllMusic.com (publisher of All Music Guides, or as Wilson & Alroy call them, All Mushy Gibberish) thinks the album from which this was derived, Boogie Motel, was their worst. Boogie Motel was their first album since 1973’s Foghat (as opposed to 1972’s Foghat—the second one can be distinguished by the literal “rock and roll” cover art) not to be certified gold or platinum, which may reflect more on Bearsville Records’ state during that time period than the band itself.

Pleasure, “Glide,” #55, 1/26/80
Welcome to a medley of Pleasure’s hit. This was a six-man R&B/funk band out of Portland, OR, which started recording for Fantasy Records in 1975, “Slide” came from their fifth album for the label, Future Now. I get some Parliament/Funkadelic vibes from this song, but that may be an exception to the rule. They released six studio albums on Fantasy Records, only a greatest hits set, The Greatest of Pleasure, is available on Spotify, along with their 1982 release on RCA Records, Give It Up (one of their Fantasy albums is available for download). After a 37-year gap, two of the band’s members recruited new mates for the recent self-released album Now Is the Time, but I don’t see a current band website.

Leif Garrett, “Memorize Your Number,” #60, 1/26/80
To me, picking out a favorite Leif Garrett song is like picking out my favorite ipecac, but I guess this is probably the closest. It’s not a drippy ballad, it’s not gentle disco, and it’s not a remake of a ‘60s song—I’m not sure I’d call it power pop, but it’s somewhere in the vicinity. This was the first single release from his 1979 album Same Goes for You, his second for Scotti Bros. (his first self-titled album was on Atlantic Records, but he went to Scotti Bros. thereafter).

Journey, “Too Late,” #70, 1/26/80
Third single from Journey’s breakthrough album Evolution. Jonathan Cain hadn’t come on board to write or cowrite big, radio-ready, nauseating power ballads (“Open Arms,” “Faithfully”) just yet, so this one didn’t quite make the grade. The song was by Neal Schon and Steve Perry—the liner notes to Journey’s box set Time3 indicate Perry wrote it for a friend with a worsening drug problem. Evolution was produced by Roy Thomas Baker, who’s better known for producing some of Queen’s biggest hits (including “Bohemian Rhapsody”) and The Cars’ first four albums.

Lobo, “Holdin’ on for Dear Love,” #75, 1/26/80
Second and final chart hit from Lobo’s self-titled “comeback” album, released in 1979. This was the follow up to “Where Were You When I Was Falling in Love,” and like many of Lobo’s songs, it was tailor-made for the adult contemporary charts, peaking there at #13. (He racked up four #1 AC hits in all: the aforementioned “Where Were You,” “Me and You and a Dog Named Boo,” “I’d Love You to Want Me,” and “Don’t Expect Me to Be Your Friend.”). Lobo (real name Kent LaVoie) started his own label in 1981 and placed a few songs on the country chart, but this was his last pop or adult contemporary hit. He still records occasionally.

Switch, “I Call Your Name,” #83, 1/26/80
Third and final Hot 100 hit for the six-man group from Grand Rapids, MI. Lead vocals on this ballad are by Bobby DeBarge, who also cowrote the song; he coproduced it as well with Jermaine Jackson. Switch would have further R&B hits (the biggest being the top 10 “Love Me Over and Over Again”), but would slowly come to a halt after Bobby and Tommy DeBarge left the band to mentor their family group, DeBarge. Switch still performs together occasionally with original members Gregory Williams, Eddie Fluellen, and Phillip Ingram (James Ingram’s younger brother) participating. Bobby DeBarge would serve five years in prison on drug trafficking charges from 1988 to 1993, and died two years later, having previously contracted HIV.

Cindy Bullens, “Trust Me,” #90, 1/26/80
This is Bullens’ second and final chart hit, from the album Steal the Night. It’s more or less a power ballad, which Bullens wrote. Unfortunately, Bullens was having bad luck with record companies, with her debut album coming out on United Artists Records, which was usurped by Capitol, and her second on Casablanca, which was not handling the postdisco days very well (and never got much of a handle on rock music other than Kiss). Bullens has released several albums since then, and came out as transgender in 2012. He’s now using the name Cidny Bullens.