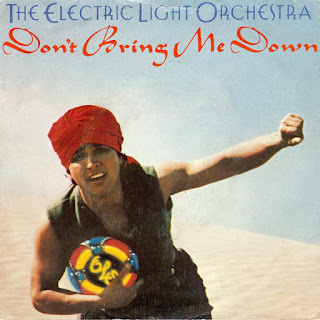 A short list this time, but a really good one—and one that bears witness that disco was on the way out.

Second single from Discovery, and their highest-charting single in the United States; the only song that did better in their native United Kingdom was “Xanadu” (which was just as much Olivia Newton-John’s song as theirs). A thumping rocker, it was a welcome departure for some longtime fans upset by the disco beat used in “Shine a Little Love.” The use of “Gros” (that’s how it’s spelled on the lyric sheet) on the bridges has been confused over the years; Lynne claimed it was a made-up temp word, then made the discovery (get it?) that the German word Gruß actually meant “greetings” and kept it—and that it was not “Bruce” (Springsteen or otherwise), although he now sings it as such at times.

First single from the band’s second LP Candy-O, this has Benjamin Orr on lead vocals, who had also done the honors on “Just What I Needed.” (It took me years to realize Orr had done lead vocals on many Cars song; I thought he’d only sung the 1984 ballad “Drive.”) This would be their biggest American hit until 1981’s “Shake It Up,” and their biggest overall hit in both Australia and Canada. It’s yet another song about a teenage girl who’s becoming attractive to the protagonist, and is also interested in “the nightlife, baby.” Looking back, it doesn’t seem too salacious, but I may have missed something over the years.

Second single from Supertramp’s monster 1979 album Breakfast in America, this one was written and sung by keyboardist Rick Davies. (If you’re ever wondering who wrote and sung what for the band, Davies has the lower voice, Roger Hodgson has the higher one. Some of their albums, including Crime of the Century and …Famous Last Words… actually color code the lyric sheets to make the difference between the two clear.) Hodgson plays the great guitar solo at the song’s end, which fortunately was left intact for the single version.

Herman Brood may have been the biggest Dutch rock star of all time… which isn’t necessarily saying a whole lot. Born in Zwolle in The Netherlands, Brood’s attempts to establish a career in music were often derailed by his drug use. But he did manage to secure a contract in 1977, and his second album, Shpritsz (which was a play on the German word syringe), was successful enough that he got a contract with a minor American label, Ariola (not to be confused with Arista), which had hit with Amii Stewart’s “Knock on Wood” earlier in the year. Brood’s album was reissued here as Herman Brood & His Wild Romance, and the song, a strong and harrowing tale of what goes on in the sketchier parts of town, scraped into the Top 40. Brood’s later albums didn’t chart in the States, but he did continue to record in the Netherlands. Continued drug and alcohol problems, along with his despairing of ever finding a cure, led to his suicide by jumping from the Amsterdam Hilton Hotel in 2001, dying at age 54.

Say hello to Canada’s second most popular power trio (apologies to the group’s fans, but I think it’s fair to say Rush holds that title). Still, Triumph did quite well over the years, racking up eight gold or platinum albums in Canada and another four in the United States. “Hold On” comes from their third LP, Just a Game, which originally featured a gatefold cover that folded out into a game board (sorry, cassette and 8-track buyers!). The song itself had a long history—originally they performed it as an acoustic piece in concert, but when it came time to record, they added the electric part in the middle and end. As a result, it was impossible to perform it in concert to make it sound like the album track. There’s a full acoustic version of the song on their live album Stages, which is the only version they ever did, and the single included only the electric parts. I’ve included the full version here, and it’s totally awesome. It’s not a blues song, but it’s a wonderful way to get over your troubles.

Okay, there’s one disco track here, but it’s hard not to love Deniece Williams, who has a fantastic voice, even if it’s not shown to full effect here. This is the first single from her album When Love Comes Calling, her first solo album after she hit #1 duetting with Johnny Mathis on “Too Much, Too Little, Too Late.” The song is catchy, and hit #1 on Billboard’s Club Play chart, but didn’t really cross over to pop. “I’ve Got the Next Dance” was one of the few songs on the album that Williams didn’t have a hand in writing; she has cowrite credits on six of the other nine songs.