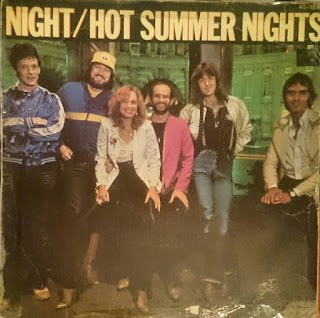 No huge hits this week, but it’s a great entry (if I do say so myself). There are songs that should have been hits, one-hit wonders, last gasps of disco, and surprising flops from name bands.

First top 20 pop hit for Rabbitt, who had become a country music superstar over the latter part of the 1970s (“Suspicions” was his fourth country #1 in a row), but hadn’t quite made it throughout the rest of the music world until then. Raised in that country music paradise, East Orange, New Jersey, Rabbitt (yes, that’s his real name) grew up a big country music fan and recorded his first songs in 1964. But he didn’t get his real big break until Elvis Presley recorded his “Kentucky Rain” a few years later. (Of course, that probably means Rabbitt also gave up half the songwriting royalties on that tune to Elvis; that was The King’s common practice at the time.)

I noted a few entries back Chris Thompson, lead singer of Manfred Mann’s Earth Band, was kissed off on their album cover Angel Station as starting a new group; here it is. Night began when Thompson met singer Stevie Vann (known at that time as Stevie Lange; she was married to producer / songwriter / eventual Shania Twain husband Robert John “Mutt” Lange at the time) when she was recording backing vocals for the Earth Band’s 1978 Chance album. Among the other band members: future Pretender Robbie McIntosh and veteran keyboard player Nicky Hopkins. This was sorta kinda their biggest hit; written by Walter Egan, who made #55 with the same song in 1978.

“Southern rock” was slowly dying out as a chart force by 1979—The Allman Brothers were struggling, Lynyrd Skynyrd had temporarily come to an end after the 1977 plan crash, and Capricorn Records (home of The Allman Brothers Band, The Marshall Tucker Band, Wet Willie, and others) filed for bankruptcy. Blackfoot came from Jacksonville, FL (although they spent some time in their formative years in New York City and Morristown, NJ). Their working relationship with Lynyrd Skynyrd—vocalist/guitarist Rickey Medlocke and bass player Greg T. Walker were with Skynyrd from 1971 to 1972; Medlocke rejoined in 1996 and still plays with Skynyrd today—helped them attract a following and a record contract. “Highway Song,” about life on the road, was the first single from their album Strikes!, which eventually went platinum.

Second single from the band’s debut album, and probably what they’re best remembered for today. “Oh Well” is another piece of evidence from my theory that whatever Fleetwood Mac touched in 1978 and 1979 sold records (Walter Egan, John Stewart, Kenny Loggins, Bob Welch, etc.)—“Oh Well” is a remake of an old Fleetwood Mac song, written and sung by Peter Green in their English blues years. The Rockets gave it a Detroit hard rock sheen (two of the band’s members got their start with Mitch Ryder & The Detroit Wheels), and the result is pretty awesome. Happily, Fleetwood Mac has kept it on the setlist off and on over the years; Lindsey Buckingham sings lead on the version that can be found on their 1980 release Live. This video, by the way, first appeared on The Midnight Special.

Another really great song, and nothing to do with classical music. Peter Bramall was a guitarist and vocalist for the British band The Motors under the pseudonym Bram Tchaikovsky. He joined the band in 1977 and departed in 1978, after they hit the UK Top 20 with “Airport” and “Forget About You.” Starting his own band thereafter, Tchaikovsky decided to keep his “name” as the band’s name, and signed with Radar Records in the UK. Strange Man, Changed Man followed in 1979, and “Girl of My Dreams”—a power pop song that made rock fans realize disco wouldn’t last forever—became their only US chart hit. After two more albums, the band broke up, and Tchaikovsky has since owned a record studio and played with several blues acts.

Not the old Coasters song, if that’s what you were thinking. Second single from Jones’ debut album, and obviously less of a big deal than “Chuck E.’s in Love.” It’s not a bad song—I like the arrangement a lot—but it just didn’t catch people’s attention the way her first hit did. Jones did okay, however, selling two million copies of her album and winning a Grammy Award in 1980 for Best New Artist, beating out The Blues Brothers, Dire Straits, The Knack, and Robin Williams. (See, the Grammy voters get it right once in awhile.)

Not to be confused with Boni Boyer (who played with Sheila E. and was a briefly a protégé of Prince), Boyer appears to have been a beautiful singer that someone at Columbia Records decided could be a disco star. Unfortunately, her record came out right as disco was going downhill fast. “Got to Get Into Love” has a Philadelphia soul feel (her self-titled album was recorded in Philadelphia and was produced by Nate Checker), but nothing to make it stand out from other product at the time. Boyer would later sing backup with Lenny Williams and Michael Penn.

Here’s another one I never heard, and it’s out of print and unavailable for download, so except for YouTube you won’t hear it either. This five-man band began with guitarists Dennis Clifton and Larry Byrom, who had been with Steppenwolf from 1969 to 1971. The duo had southern roots, but the sound here is pretty much late disco and pop. Released on Free Flight Records (a sublabel of RCA), this was the band’s one and only hit, and after 1980’s Do You Believe in Magic (somebody might have whispered in the band’s ear that naming their albums after classic hits without actually including them on their albums might not be a good strategy) they broke up. Clifton played in various bands was a studio musician after that, dying of cancer in 2008. Byrom is still a studio musician today.

Give Motown credit—they did their best to break this band on the pop charts, but nothing ever really happened. This was the lead single from their second album, Switch II, and while their first single “I Call Your Name” made it to the pop Top 40, this was another example of songs released during the waning days of disco that didn’t make the grade. This song was written, produced, and sung by Bobby DeBarge, who would later help helm Motown releases by his family’s group, DeBarge.

One-hit wonder in the United States, but The Barron Knights are well known in the United Kingdom, with 13 chart hits, including five top 10s, between 1964 and 1983. The five-man group originally started out as a straight pop/rock band with something of a music hall background, and toured with both The Beatles and The Rolling Stones in their early days. But their first big hit was the jokey “Call Up the Groups,” where they imagined various British pop groups were conscripted in the Army, and what their hits would sound like. That led them down the road to music hall comedy, including straight parodies of hits (a la “Weird” Al Yankovic). “The Topical Song” was a parody/homage of Supertramp’s “The Logical Song,” instead joking about the oil crisis, and while it made the American Billboard charts, it never charted in the UK. The group still tours, albeit with Pete Langford as the only original member. So rare nowadays I couldn’t even find a decent video, and apparently there’s more than one version; the lyrics here don’t match the ones I have on my copy.

Well, you had to expect this. A Taste of Honey became an overnight sensation thanks to “Boogie Oogie Oogie” in 1978, with both the single and album going platinum and the band winning a Grammy for Best New Artist (beating out Elvis Costello—years later, Sports Night conflated A Taste of Honey with 1977 Best New Artist winner Starland Vocal Band and claimed that band beat out Costello). But the subsequent singles from the first album didn’t chart, and this song, released toward the end of the disco era, didn’t go far. Cowritten by band members Janice Marie Johnson and Perry Kibble, who were also the band’s rhythm section (Janice played bass, Perry played drums). It’s not a bad song at all.

Another surprising flop, especially given this was a pretty major hit elsewhere in the world (top 5 in Belgium, Ireland, the Netherlands, and the United Kingdom). It was paired up in many territories (including the United States) as a double A-side with “Angeleyes,” but this song was definitely a nod toward disco, even more than their biggest American hit, “Dancing Queen.” In its review of the single, Billboard claimed it had “intriguing, almost Russian-sounding musical accents”—which makes me wonder who was writing the reviews.

Speaking of bombs, wow. Chicago hadn’t had the first single off an album miss the top 30 since their debut in 1969, so this was a massive whiff. I’m not sure why they thought they had to release this album so soon after Hot Streets (ten months), plus the first song off the album, “Street Player,” had already been the title cut from a Rufus album the previous year (it had been cowritten by Chicago drummer Danny Seraphine and Rufus keyboardist David “Hawk” Wolinski), and gave it a disco feel at precisely the wrong time. “Must Have Been Crazy” isn’t at all disco, but it was written and sung by newcomer Donnie Dacus, who had taken Terry Kath’s place as guitarist after Kath’s death—and perhaps that was the problem: an unfamiliar vocalist, and no horns whatsoever. This would lead to a huge downturn in Chicago’s fortunes for the next few years. By the end 1979, Dacus had been dismissed from the band.