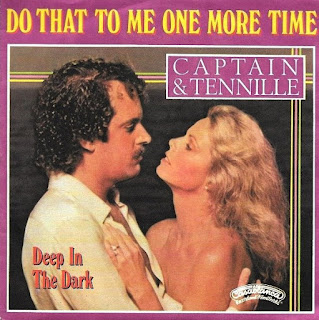 The last top 40 hit for The Captain and Tennille was also one of their biggest. “Do That to Me One More Time” was also their first release on Casablanca Records, after spending their entire career on A&M. Tennille noted in her 2016 memoir it appeared A&M thought the duo’s chart run was nearing its end, based on releasing a greatest hits set after just three studio albums. Casablanca thought otherwise, and they made the switch to the then-hot label despite knowing its reputation for cocaine use. (Tennille: “Many of the Casablanca staff and executives were also flying high on something else, and I’m not talking about private planes.”) Tennille wrote the song (about longing for more affection from her husband), not expecting it would be considered a single, but Casablanca’s executives thought it would be great—and it’s probably the duo’s most-played song nowadays on oldies and AC radio. (“Love Will Keep Us Together” has a certain kitsch value, but hasn’t aged as well.)

Last chart single for the band (drummer John Bonham died of pulmonary aspiration that September), and their first top 30 single since 1973’s “D’yer Mak’er,” off Houses for the Holy. In fairness, Zep wasn’t a band that particularly needed to release singles, since their songs didn’t get much top 40 airplay or didn’t work on AM radio (for example, “Stairway to Heaven” was never a single because of its length), and their legion of fans always bought their albums as soon as they were released (the song’s parent album In Through the Out Door was #1 for seven weeks in September and October 1979, before being replaced by the Eagles’ The Long Run). It’s not a particularly Zep-like song—most of the songwriting for the album was done by Robert Plant and John Paul Jones (Jimmy Page was battling drug problems), but Bonham’s drum parts really make it unique.

Pointer’s third solo chart hit, and last. Somebody at Motown Records (possibly her husband, producer Jeffrey Bowen) thought after the success of “Heaven Must Have Sent You” the previous year she should record lots of Motown remakes—so five of the six tracks (clocking in at 31:20—talk about skimpy) on the album are old Holland-Dozier-Holland songs (for which Motown owned the publishing rights). “I Can’t Help Myself” is a pretty good song (although I don’t know if the “Sugar Pie, Honey Bunch” chorus has stood the test of time), but enough already. And naming the second album Bonnie Pointer a year after the first album was also named Bonnie Pointer was just careless—if nothing else, it had to create lots of confusion at record stores. Pointer would release a hitless 1984 album on independent Private I Records, and another solo album, Like a Picasso, in 2011, but was also arrested for cocaine possession that year (of the four original Pointer Sisters, only Anita avoided cocaine problems). Bonnie and Anita recorded a tribute to June Pointer, “Feels Like June,” earlier this year, but Bonnie died of cardiac arrest June 8, age 69.

Twelfth Hot 100 hit for the five-brother band, all born in Providence, RI, but raised in nearby New Bedford, MA. “Bad Times” was their first chart hit since 1978’s “More Than a Woman” from the Saturday Night Fever soundtrack. Tavares was pretty dependent on outside songwriters—I looked through about six of their albums and only found a couple of songs written second-youngest brother Butch (one cowritten with his then-wife Lola Falana), and this was a move away from some of the disco-tinged music they’d been releasing for several years. Written by Gerard McMahon (who would later become a solo artist), it comes from the album Supercharged, and was produced by former Blood, Sweat & Tears drummer Bobby Colomby.

This is the same guy who cowrote and sang “Ride Captain Ride,” my first-ever favorite song on the radio? Wow, things changed. Pinera was with a number of bands—Blues Image, a latter-day version of Iron Butterfly, and New Cactus, as well as playing in Alice Cooper’s band from 1980 and 1982 (a low point for Cooper, not because of Pinera but because his alcoholism was so fierce he can’t even remember making the albums he was touring). “Goodnight My Love” comes from Pinera’s second solo LP, Forever, and it’s a gentle ballad that Pinera wrote himself. He now tours with The Classic Rock All-Stars, featuring former members of Sugarloaf, Grand Funk Railroad, Steppenwolf, and The Knack.

Funk workout led by drummer White, once and future drummer for the jazz fusion band Return to Forever, led by Chick Corea and Stanley Clarke (their most recent album, The Mothership Returns, came out in 2012). Not to get up on the soapbox, but this demonstrates the huge gap at the time between the R&B and pop charts—this song peaked at #3 on Billboard’s R&B chart, but obviously came nowhere close to that level on the Hot 100. Anyway, White led the band through three albums with decreasing returns each time out, until they broke up in 1983. White now does session work and teaches at New York University-Steinhardt, and has released nine jazz albums under his own name.

Every rock band in the 1970s apparently needed an “ain’t rock and roll great?” anthem; this is April Wine’s. This was the second single from the band’s 1979 album Harder… Faster (hmmm?), following “Say Hello,” which hit #34 in their native Canada but did no better than Bubbling Under the Hot 100 in America at #104. It’s generally listed among the greatest Canadian rock songs of all time, but hasn’t had the same kind of accolated in the United States. The album did go gold in the US, however, which was the first time April Wine had hit that level.

Second and final chart hit for Valery, who was originally better known as the younger sister of singer Sergio Franchi. (Among us game show fans, she’s better known for being an occasional panelist on What’s My Line in the 1970s—and she was pretty good at it, too.) Raised in South Africa, Valery recorded a few albums there in the 1960s before moving to the United States. Her first chart hit in 1976 was a remake of “Will You Love Me Tomorrow;” this orchestrated ballad appears to be a one-shot single release. (Side note: “Rainbow Connection” is on the flip side of the single; I suppose it’s possible that label Scotti Bros. intended it be the A-side until Kermit the Frog beat them to it.) Valery now lives in New York City with her husband Peter.