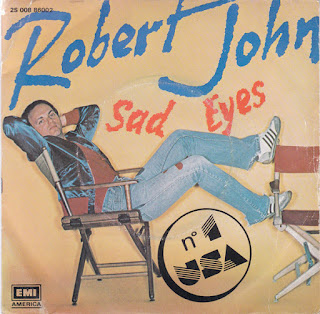 By Curt Alliaume
One huge hit, and a bunch of songs you probably haven’t heard much.
Robert John, “Sad Eyes,” #1, 10/6/1979
I’m pretty sure that when EMI-America released this song as a single in April or May of 1979, no one there thought John—who hadn’t charted a single in seven years, and was pretty much the antithesis of what promoters looked for in singers—would wind up knocking The Knack out of the #1 single spot. And it only took him five months to do it. “Sad Eyes,” a ballad about the end of a relationship (apparently because the guy’s other lover is coming back to him) that John wrote himself, took a long time just to reach the top 40, but lasted on the Hot 100 for 27 weeks, tying Gloria Gaynor’s “I Will Survive” for the longest chart run of 1979. It also ranked #10 among the most popular songs of the year, and might have come in higher had it not straddled the two “years” (Billboard at that point counted a year from roughly November 1 to October 31). This turned John from a one-hit wonder (1972’s remake of “The Lion Sleeps Tonight”) to a two-hit wonder, but this is the one everybody remembers.

Diana Ross, “The Boss,” #19, 10/6/1979
Moderate hit for Ross from the album of the same name. It’s definitely a step toward disco, but it had its appeal to pop fans as well (although the album hit #1 on the Disco charts as well; most of the club play went to either this song or “No One Gets the Prize,” which appears not to have been released as a single in the United States). Produced and written by Nick Ashford and Valerie Simpson, it was the first time Ross had worked with them since they had left Motown and becoming recording artists on their own. They’d previously produced two of her first three solo albums (Diana Ross and Surrender), after seeing initial success writing songs for Marvin Gaye and Tammi Terrell, starting with “Ain’t No Mountain High Enough”—which of course Ross made a #1 hit herself.

Louise Goffin, “Remember (Walking in the Sand),” #43, 10/6/1979
I know this is out of order, but I mentioned in this post Aerosmith had charted a remake of this Shangri-Las song four months later. Well, here’s the original, uh, remake. Louise Goffin is the oldest daughter of Carole King and Gerry Goffin, and was just 20 years old when this song emerged from her first album, Kid Blue. She’s a good singer, but the time for dramatic songs like this one may have passed by the time this came out. This would be Goffin’s one and only chart hit, but she’s released nine albums. Unfortunately, this song and Kid Blue are pretty much unavailable anywhere (it’s not even on Spotify), so this YouTube video and the used record stores may be all you’ll find of this.

Suzi Quatro, “I’ve Never Been in Love,” #44, 10/6/1979
First single from Quatro’s 1979 LP Suzi… and Other Four Letter Words (where’s the hyphen, Suzi?). This was part of an attempt on RSO Records to make Quatro as big a name here in the United States as she had been in Europe and Australia, where she’d had a run of top 10 hits. So she did a few more guest appearances on Happy Days as Leather Tuscadero (including one appearance where she was Ralph Malph’s fraternity formal date and wore a dress, something neither Leather nor Suzi would normally ever do). Anyway, this is a solid rocker that deserved a higher chart placement; American rock radio wasn’t doing anything with female solo rockers at that point (not that they do much now).

Eddie Money, “Get a Move On,” #46, 10/6/1979
Another rocker, which was another indication disco influences were no longer in vogue (Money’s single from earlier in the year, “Maybe I’m a Fool,” definitely had some). It appears this single wasn’t issued directly from a Money album (it’s included on his third LP, Playing for Keeps, which wasn’t issued until August 1980), but from the soundtrack for the movie Americathon, a flop film comedy that managed to combine a ton of talented people (produced by Joe Roth, written by Phil Proctor and Peter Bergman of Firesign Theatre, starring John Ritter, Harvey Korman, Fred Willard, Jay Leno, Howard Hesseman and others) into an apparently very unfunny movie. Which is probably why the song didn’t do much.

Charlie, “Killer Cut,” #60, 10/6/1979
Third of four chart hits for this British band, following 1978’s “She Loves to Be in Love.” It’s pretty much generic rock, most notable for its lyrical similarities to The Byrds’ “So You Want to Be a Rock ‘n’ Roll Star” (to the point where Roger McGuinn and Chris Hillman really should have gotten a partial cowrite credit, but whatever). Interesting note: the band’s drummer for much of its recording career was Steve Gadd, who is not the same Steve Gadd who’s drummed with Steely Dan, Chick Corea, Paul Simon, Eric Clapton, and his own bands. Completely different British guy.

Rita Coolidge, “One Fine Day,” #66, 10/6/1979
First single from Coolidge’s 1979 A&M album Satisfied (which followed 1977’s Anytime…Anywhere and 1978’s Love Me Again—subtle, huh?), and this went back to the strategy of remakes of classic oldies, in an attempt to duplicate Linda Ronstadt’s success in the genre. I’m not sure why this was unsuccessful other than a crowded singles market at the time—my original instinct was to say “One Fine Day” was pretty ancient at that point, but Carole King (who wrote the song) hit #12 with it the following year. Coproduced by Booker T. Jones of Booker T. and The MG’s (who was married to Coolidge’s sister Priscilla at the time). And yes, that’s Michael McDonald on backing vocals.

Hotel, “Hold On to the Night,” #80, 10/6/1979
Follow-up to the band’s biggest hit, “You’ve Got Another Thing Coming,” which hit #54 in August. I guess the natural inclination was to follow up a rocker with a slow dance ballad. Like their previous hit, this isn’t to be confused with a more famous song with a (nearly) identical title—in this case, Richard Marx’s “Hold On to the Nights” from 1988. The song was cowritten by lead singer/guitarist Mark Phillips and Barry Mann, whose songs range all the way from 1961’s “I Love How You Love Me” for Bobby Vinton to 1978’s “Here You Come Again” for Dolly Parton (both cowritten with his wife, Cynthia Weil). Mann and Weil appeared on the Hot 100 earlier in 1979, writing “Heart to Heart” for Errol Sober.
Van Halen, “Beautiful Girls,” #84, 10/6/1979
You might think this was a bigger hit—it’s still played on classic rock radio, and got a boost years later when Saturday Night Live lifted it for a parody of beer ads (Google “Schmidt’s Gay SNL” for details, although some video versions have exchanged “Beautiful Girls” for generic rock riffs). This is a typical Van Halen song, but a great one—solid riffs from Eddie Van Halen (RIP), and a great vocal from David Lee Roth. The only reason I can think this wasn’t a bigger hit was it might have been a little too raunchy for AM radio.