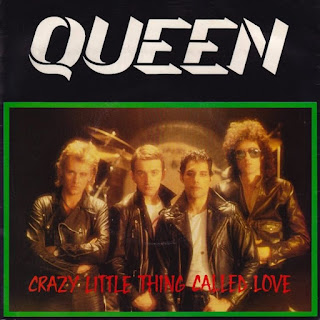 Only one huge hit this week, but a few memorable songs.

First single from the band’s 1980 LP The Game, this came out well in advance of that album (in fact, Queen was still making the album in February 1980). This was also the start of the band trying to break out of the progressive/glam rock niche they’d occupied since their debut. This song was a 1950s throwback, written by Freddie Mercury, who told Melody Maker, “’Crazy Little Thing Called Love’ took me five or ten minutes. I did that on the guitar, which I can't play for nuts, and in one way it was quite a good thing because I was restricted, knowing only a few chords. It's a good discipline because I simply had to write within a small framework.” Released in September 1979 in Europe, Elektra Records wisely held the single until December in the United States to avoid battling the superstar acts dominating the charts at the time.

Columbia Records’ attempt to build another singer/songwriter superstar along the lines of Bob Dylan and Bruce Springsteen, this remains Forbert’s best-known song. Written about a woman Forbert knew in Meridian, MI (where Forbert grew up), the song was dedicated to the memory of Florence Ballard on its parent album Jackrabbit Slim (Ballard, one of the original Supremes, died at the age of 32 after struggling for years follow her ejection from the group). Jackrabbit Slim was Forbert’s second album on Columbia sublabel Nemperor Records, and was produced by John Simon, who worked with The Band, Janis Joplin, and Blood Sweat & Tears.

John Stewart’s last chart hit as a performer peaked two weeks previously, but this song still added to his bank account. Stewart had written the song in the waning years of The Kingston Trio, and when The Monkees recorded it (with a slight lyric change; the original had “now you know how funky I can be”), it hit #1 in late 1967. The song has had lots of remakes, but Murray’s is the only one that made a major splash on the charts, hitting #1 adult contemporary and #3 country in addition to its pop placing. This would be Murray’s last top 30 pop hit, ending a string that began with 1978’s “You Needed Me.”

Third and final single from the band’s 1979 album Midnight Magic, and guess what—it’s a slow song sung by Lionel Richie. If it doesn’t sound much like a Richie ballad, that’s probably because it was written by keyboardist Milan Williams (who isn’t a singer, which is why Richie was on vocals). Honestly, by this time longtime fans of the band probably wished somebody else at Motown was picking the single releases—“You’re Special” and “Sexy Lady” were far better songs, and more uptempo. Midnight Magic was the band’s third consecutive album to peak at #3 on The Billboard 200 LP chart and #1 on its R&B album charts, so I guess Motown figured they were doing just fine. (Note: not to be confused with Earth, Wind & Fire’s “Boogie Wonderland.”)

Back around 1961, New York Yankees manager Ralph Houk told Howard Cosell, who was covering the Yankees for WABC radio long before he became a nationally-known name, “You’re like shit—you’re everywhere.” It probably wasn’t meant as a compliment (although Cosell took it as such). Between 1979 and early 1981, Michael McDonald was everywhere. His band, The Doobie Brothers, charted seven singles, most of which featured McDonald as lead singer. In addition, he sang backup, harmony, or duet vocals on at least seven top 40 singles by my count: “Please Don’t Leave” by Lauren Wood, “This Is It” by Kenny Loggins, “Ride Like the Wind” by Christopher Cross, “Steal Away” by Robbie Dupree, “How Do I Survive” by Amy Holland, “Time Out of Mind” by Steely Dan, and this duet, which would be the only charting single from Larson’s second album In the Nick of Time. And frankly, McDonald might have been better off saying no a few times—all those appearances on the top 40 and AC charts probably didn’t help his rock cred, and when he launched his solo career, his overfamiliar vocals may have led a few radio stations to say “Enough.”

Third and final chart hit for Richards, who was blinded in one eye in an archery accident at age four, and lost the sight in his other eye a quarter-century later as a result of poor medical treatment to the original injury. Still, he hung in and started his recording career in 1959 with two singles on independent Fraternity Records, and recorded on several labels in the 1960s and 1970s. “You Might Need Somebody” was from the 1979 Atlantic album Therfu, and was cowritten by Tom Snow, who wrote “Deeper Than the Night” for Olivia Newton-John the previous year. “You Might Need Somebody” became a top 15 hit twice in the United Kingdom: #11 for Randy Crawford in 1981, and #4 for Shola Ama in 1997.

Jim Kirk and The TM Singers, “Voice of Freedom,” #71, 2/23/1980
This one’s a little creepy. Kirk (also known as James R. Kirk) was known for making jingles and commercials for radio and television, but “Voice of Freedom,” with its kid-led vocals, sounds like something out of “Up With People.” I’m not sure if it was recorded in response to the Iran hostage crisis, but it sure sounds like an advertisement for the U.S. of A. It did get some radio airplay, and since the proceeds for the song went to the American Red Cross, I guess I shouldn’t complain. Kirk still runs Corporate Magic, which creates corporate events. The video is taken from Dinah Shore’s syndicated variety show Dinah!

Also creepy, but for a completely different reason. Boomtown Rats leader Bob Geldof and keyboardist Johnnie Fingers wrote the song after hearing about a school killing in San Diego; the student who killed two and wounded nine told reporters “I don’t like Mondays.” Geldof incorporated some of her statements into the lyrics, which he later regretted: “[She] wrote to me saying ‘she was glad she'd done it because I'd made her famous,’ which is not a good thing to live with.” The song was a major hit through most of the world (including #1 in Ireland, Australia, and the United Kingdom), but here in the United States, it understandably didn’t get much traction. The band’s only hit in the United States, The Boomtown Rats charted 16 times in the United Kingdom between 1977 and their breakup in 1985; they’ve since reunited. Geldof, of course, was a driving force in Band Aid (cowriting “Do They Know It’s Christmas?”) and Live Aid.

John Cougar, “Small Paradise,” #87 2/23/1980
He didn’t start charting highly for a few years, but John Mellencamp (then known by his much-loathed stage name of John Cougar) had been recording for a long time before “Hurts So Good” and “Jack and Diane.” “Small Paradise” came from his third album (the first one had a small release in the United States; the second had none at all), John Cougar, which also included his first major hit, “I Need a Lover” (which had been picked up from the second album, A Biography). “I Need a Lover” stands head and shoulders above everything else on the rest of the album; although “Small Paradise” isn’t bad, it’s just a little too slick compared to his later work. (I guess I should probably listen to the album again one of these days.) This is from American Bandstand, of course; I actually remember watching this episode when I was a teenager.