If You're Only Going to Buy One Greatest Hits Set From... The Byrds


The Byrds were the first folk-rock act to hit the big time – their first #1 hit, “Mr. Tambourine Man” (written by Bob Dylan, which gave it some cachet among folk purists) hit the top in late June of 1965, a full six months before Simon & Garfunkel’s “The Sound of Silence.”  The good news is The Byrds were quite talented on their own, with two good songwriters to start with (Gene Clark and Jim McGuinn, who would change his name to Roger a couple of years later) and two that developed over time (David Crosby and Chris Hillman).  (Drummer Michael Clarke was not a songwriter; he was primarily recruited for his resemblance to Rolling Stone Brian Jones.)  The bad news is they self-destructed pretty quickly – Clark bailed out after two albums, Crosby was bounced a year after that, and Hillman split after their foray into a more pure country sound, Sweetheart of the Rodeo.  McGuinn carried on for a long time after that with a variety of musicians, but they put out so much product over that time (eleven studio albums over five and a half years?) that the name wound up being sullied.  After a half-hearted reunion of the original five members in 1973, the group stayed apart almost for good (more on that later).

With the exceptions of some early recordings released under various titles and the 1973 album Byrds, all of their recordings were for Columbia.  That means getting a good greatest hits set isn’t a problem – and compilations are probably preferable to all but two or three of the studio albums.  Of course, it also means there are a lot of hits sets out there, so finding the right one can be a challenge.

Here's my choice, and it's kind of an odd one: 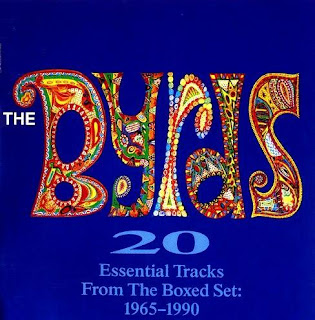 The band’s output consists of five albums with most of the original group, five albums with McGuinn and a bunch of other guys, and Sweethearts of the Rodeo, which sounded like nothing that came before or after.  This is the only single-disk set that contains everything great from the first half of their career and everything that’s worth having afterward.  The bad news:  it contains nothing from Sweetheart of the Rodeo (possibly because the box set contained songs from that album as originally recorded with Gram Parsons singing lead, and no doubt Columbia wanted buyers to drop a bigger chunk of change on that), and three meh songs from a short reunion between McGuinn, Crosby, and Hillman in 1990 (to establish claim to the name over Clark and Michael Clarke, who had both toured in recent years with ersatz bands billed under the Byrds name).

This brings up another side issue - I'm not altogether sure why these reunion tracks were billed as "The Byrds" but no songs from the 1979-1980 McGuinn, Clark, and Hillman experiment are on any of these greatest hits sets.  Just guessing, but I would say it's any or all of the following three reasons: 1) McGuinn and Crosby agreed at the time not to call the band The Byrds because all five weren't involved, and stuck to it, 2) McG, C & H albums were on Capitol, so Columbia didn't want to lease any of the music, 3) they're not very good.

Getting back to this CD, I do like the price ($9.99 for the download on Amazon, but I saw it tonight for $5.99 at Best Buy), so I’m willing to overlook these flaws – if you’re desperate for the Sweetheart of the Rodeo stuff, look (and be ready to pay more) for The Essential Byrds or buy this and the actual Sweetheart album.

Here’s the rest, in chronological order (links are to the Wikipedia listings):

There aren’t many solo compilations from the band members – Gene Clark could certainly use one (although it might be hard to pull that off because he was with a bunch of labels), and so could Roger McGuinn (easier, since most of his solo albums were with Columbia or Arista, which are both under the Sony banner).  Chris Hillman’s Desert Rose Band released a greatest hits set in 1992, but that’s hardly representative of his entire career.  Many of Gram Parsons’ solo recordings are on The Complete Reprise Sessions (2006) from the always-reliable Rhino, although my one-disk version of GP/Grievous Angel should be fine for most (and neither contains anything from his Flying Burrito Brothers days).  As for Michael Clarke, I’m sure there’s a Firefall greatest hits set out there somewhere.

The one exception to this rule is David Crosby, which should be no surprise since he’s had the most successful and varied solo career (with several well-publicized detours, of course).  Voyage, from 2006, contains 51 songs (granted, only three are from the Byrds, but given he was only starting to write songs late in his tenure with the band, that’s no surprise), including a wide variety of solo, CSN, CSNY, and Crosby & Nash songs, plus a few from the band he headed with his son James Raymond as CPR.  Throw in a disk of unreleased material, and for an $18.99 download cost, it’s really worthwhile.
Posted by Curt Alliaume at 11:56 PM