If You're Only Going to Buy One Greatest Hits Set From... The Allman Brothers Band 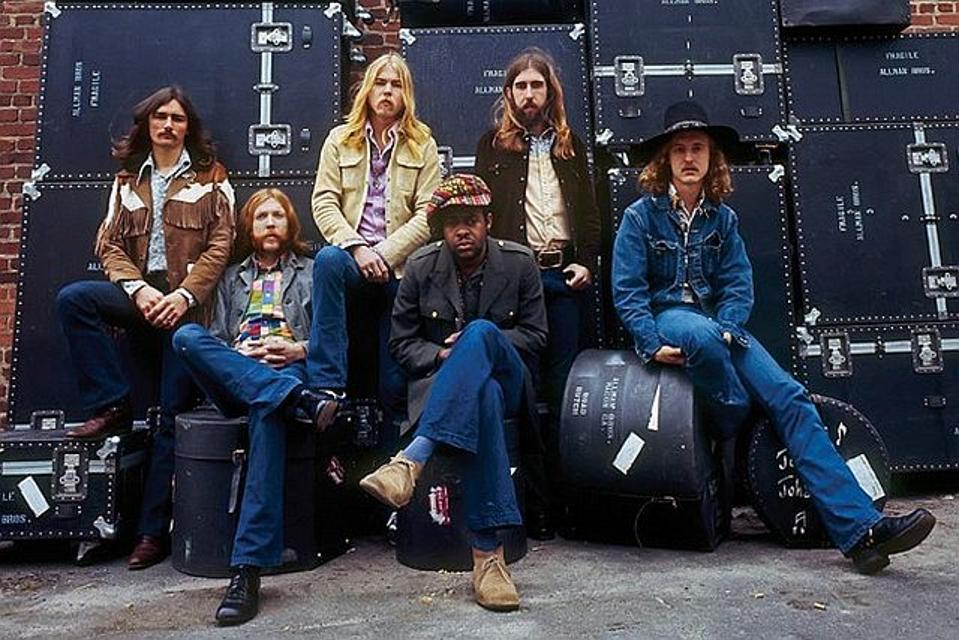 I guess I was somehow hoping against hope I wouldn’t have to write this one, but when Gregg Allman entered hospice care last month, it seemed inevitable.

I was late getting to the Allman Brothers.  Growing up as a kid in the 1970s, the only song that crossed onto the pop charts was “Ramblin’ Man,” and they were struggling by the end of the decade (although their second top 40 hit, “Crazy Love,” got significant airplay on AOR stations).  By that time, two of the original band members (lead/slide guitarist Duane Allman and bassist Berry Oakley) had died in motorcycle accidents, and much of the rest of the band was plagued with substance abuse issues and infighting.  After their original label Capricorn went bankrupt in 1979, they moved to Arista for two poorly-received albums, then stayed apart for the rest of the 1980s.  After Gregg Allman resurrected his solo career, the band reunited with a new lead guitarist, Warren Haynes, signed with Epic Records, and stayed together more or less through 2014, when Gregg’s continuing health problems finally led to them calling it a day.  (A long-time alcohol problem finally was conquered in the mid-1990s, but the resulting liver transplant and other health issues slowed him down.)

The Allman Brothers Band were more focused on live performances than studio albums (of their 18 major-label releases between 1969 and 2004 excluding hits sets, six and a half were live, and they’ve released 11 retrospective performance albums as well).  The result is a greatest-hits set may not serve all that well as an introduction to the band.  They were also known for their extended jams – I’m listening to a shuffle play as I write this, and six of the live songs on the shuffle are over ten minutes long, including “Mountain Jam” from the Fillmore Concerts set, which clocks in at 33 minutes and 58 seconds.  So the thing to do might be to start with a greatest hits set, then move on to a live album or two.  (At present my collection includes four live albums, three greatest hits sets, and two studio albums – and come to think of it, the two studio albums are on an omnibus set.)

This one isn’t all-inclusive, but it sure is good:

This was released just after the CD era started, and Polydor (who inherited the Capricorn catalogue after the label fell apart) did the job pretty well.  It’s a single disk, coming in at over 75 minutes with 16 songs, two of which are live.  There are no extended jams, but all of the versions are full length, and it shows the band in their best period.  It’s $12.49 for the download on Amazon and $12.99 on iTunes, but it’s just $3.99 for the physical disk as an “add-on item” on Amazon (in other words, you buy $25 of other stuff from them and they’ll charge just $3.99 for the disk).  That’s worth it.  Since it’s also gone double platinum, you can probably find it in used CD stores as well.

Here are the other options.  Links go to Wikipedia entries.

Beginnings (1973) – after the band hit the big time, Capricorn came up with the bright idea of rereleasing their first two studio albums, The Allman Brothers Band and Idlewild South, neither of which had sold all that well in their initial releases, as a two-album vinyl package.  There weren’t any additional bonus tracks or anything, but it still sold pretty well, and when it was released on one CD (or one download), it was a great buy.  I have it, and it’s a good introduction to the group.  Universal Music Group (who took over Polydor and a pile of other labels in the 1990s and 2000s) has made the album unavailable for download, but there are still some CDs available at Amazon at $7.39.

The Road Goes On Forever (1975/2001) – this was originally released in 1975 as a double album, and it was the only Allman Brothers anthology for years after.  UMG rereleased it in 2001 and made it a two-disc CD set, bumping the number of tracks from 17 to 30.  In 2005, UMG changed their minds and rereleased it again as part of their Gold series, an attempt to do for their artists what Sony has done with their Essential sets (nice try, UMG).  I don’t think there was a concurrent vinyl re-release, so be aware what you’re getting if you buy it on vinyl, and also note these songs are only from the Capricorn years.  The Allman Brothers: Gold is available for $8.99 for the two-disc set on Amazon, and it’s available for download at $16.49 (Amazon) and $16.99 (iTunes).

The Best of The Allman Brothers Band (1981) – I can’t remember if this was ever available in the United States or not – it’s apparently around in Canada.  The track listing doesn’t look much different from The Road Goes On Forever, so I can’t really see why they’d bother.  Anyway, $14.84 on disc, not available for download.

Dreams (1989) – four-CD box set, which may be a little much.  There’s a lot from Duane and Gregg’s pre-Allman Brothers Band group The Hour Glass (and even before that, The Allman Joys), as well as plenty of solo stuff from Gregg (including one song from his collaboration with then-wife Cher) and Dickey Betts.  There’s very little from the Arista albums (which may be a good thing), and obviously nothing from the Epic years, which started in 1990.  Out of print, but available for download at $32.99 (Amazon) and $34.99 (iTunes).

Hell & High Water: The Best of the Arista Years (1994) – both the band and at least some of their fans think very little of their two Arista studio albums (and apparently the group broke up rather than recording a third for the label), so this can probably be skipped.  It did yield one minor top 40 hit (“Straight From the Heart,” which sounds more like Pure Prairie League) and a pretty good AOR track in “Angeline,” but not much else.  $9.99 for the download on Amazon or iTunes, and the disc is now $10.99 on Amazon as an import.

Mycology – An Anthology (1995) – this is a not-quite-complete anthology from the years on Epic Records (they would release another live album a few years later).  The Epic years weren’t as good as the Capricorn era, but nowhere near as bad as the Arista albums, so it’s an option, at least.  Out of print, and now apparently unavailable for download.

20th Century Masters - The Millennium Collection: The Best of the Allman Brothers Band (2000 & 2007) – I generally hate these sets with a passion – they’re always 11 or 12 songs on a disc (which is outrageous when you consider some of the bands in the series were from the 1950s and early 1960s, when every song was around two and a half minutes long), and are usually assembled with little interest or love for the music, but exist primarily to grab a buck by issuing a low-price disc.  This one gets a few points for including the full-length versions, which means the full disc clocks in at 53:43.  But that’s the studio version – to confuse the issue, UMG has also released a live 20th Century Masters set for the band, with six more songs (fortunately, there’s no duplication between the two).  Since the “Live” version is indicated in four-point type, the main difference on the cover is the band photos (the “Live” one is a color photograph).  The bad news is all of the “Live” songs are from the Fillmore Concerts set, so you’d be better off with that, even with the additional cost.  Both are out of print; they’re available for download from both Amazon at iTunes for $5.99 for the older set and $9.99 for the live set.

Stand Back: The Anthology (2004) – I saw this at a used CD store a few months back and inexplicably passed on it.  Along with Dreams, this is the only UMG set that contains anything from the Arista or Epic years (not a lot, granted, but enough so you get the idea).  This is $8.99 for the two-disc set on Amazon (it doesn’t appear to be available for download), so either this or Gold is a reasonable option, depending on how much of a purist you are about the original band.

The Essential Allman Brothers: The Epic Years (2005) – this is one of Sony’s many entries in the series.  The title tells it all:  it’s only songs from their Epic years, which included three studio albums and three live albums.  But while this isn’t the Allmans at their peak, it’s still pretty good, and it includes four live cuts of classic songs originally recorded for Capricorn, including a version of “Midnight Rider” that is unavailable elsewhere.  I’ve got it, and I’m not sorry.  $7.99 for the disc on Amazon;  $9.99 to download on Amazon or iTunes.

Duane never released a proper solo album, but between his Allman Brothers output and his sessions work and guest shots with others, Capricorn was able to assemble a pair of double albums after his death.  An Anthology ($12.49 for the download on Amazon, $12.99 on iTunes) features an early Hour Glass cut, session work on songs like Wilson Pickett’s “Hey Jude,” Aretha Franklin’s “The Weight,” and Boz Scaggs’ “Loan Me a Dime,” five Allman Brothers songs, and “Layla,” which he did while guesting with Derek & The Dominos.  (I would hope everyone would have this song somewhere in their collections.)  An Anthology Vol. 2 ($12.49 and $12.99 for the download as well) isn’t nearly as fine, but still has several solo songs, session work from artists from Herbie Mann to Lulu, and a few more Allmans cuts.  Dickey Betts has no official best-ofs, but a couple of his 1970s albums are available as two albums on one disc.

The Allman Brothers Band didn’t really chart a lot of music, so the list below isn’t representative, but it’ll give you an idea.  “Nevertheless” and “Louisiana Lou and Three Card Monty John” were from one of their lesser Capricorn albums, Win Lose or Draw, while “Angeline” and “Straight From the Heart” are from the Arista years (I suspect “Angeline” charted fairly high on the Mainstream Rock charts, but whoever compiled this for Wikipedia missed that fact).

Posted by Curt Alliaume at 2:20 PM