If You're Only Going to Buy One Greatest Hits Set From... The Kinks 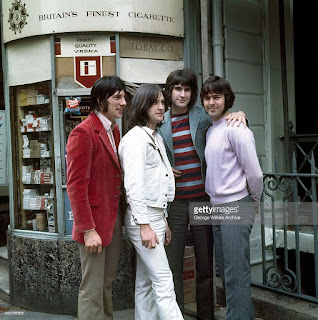 Okay, I’ve now done The Rolling Stones, The Who, and The Kinks.  (I haven’t done The Beatles yet, but my short answer is just get all of their albums.)  I can't guarantee I'll be doing all of the British Invasion bands; don't count on Gerry and The Pacemakers.


The Kinks have had a long and strange history, and every time I think it’s just about over, there’s talk Ray Davies (lead singer and primary songwriter) and Dave Davies (lead guitar, secondary songwriter) are putting their differences aside.  (Remember when Noel and Liam Gallagher didn’t get along during the peak years of Oasis?  These guys originated the battling rock & roll brothers stories.)  They were one of the most primitive acts of the British Invasion, and wound up becoming one of the most British.  They went through a period of three years in the late 1960s where they weren’t allowed to play in the United States (long story), but starting a couple of years later they stopped charting albums in the U.K. – and had seven top 40 albums in the United States from 1970 to 1984.  They’ve been on five different record labels in the U.S. – but their catalogue isn’t as messy as you might think.  And they’ve had several drummers, a bunch of bass players, the occasional keyboard player, and in the early 1970s, a horn section.  To be truthful, I get more out of listening to The Kinks nowadays than I do The Rolling Stones.  (I don’t dislike the Stones at all – but Davies’ lyrics evoke far more for me than Mick and Keith’s do.)

There are challenges.  The first few Kinks albums were produced by British pop maestro Shel Talmy (he also produced The Who Present My Generation, and the band had to sign some onerous contracts to extricate themselves from his management shortly thereafter).  So the band’s Pye Records history (they were on Reprise in the States) comes down to Talmy’s era (“You Really Got Me,” the soundalike “All Day and All of the Night,” “Tired of Waiting”) and post-Talmy (“Waterloo Sunset,” “The Village Green Preservation Society,” “Lola”).  They were then with RCA for six years (which yielded a very good album in Muswell Hillbillies, one great song in “Celluloid Heroes,” and a lot of concept albums I haven’t heard), nine great years with Arista (“Rock & Roll Fantasy,” “(Wish I Could Fly Like) Superman,” “Come Dancing,” and the great live album One From the Road), followed by a couple of failed albums with corporate monolith MCA and winding down with Columbia.

Most of the band’s output seems to have reverted to the band – but not all.  The MCA albums remain under that label’s control (no great loss), but the RCA, Arista, and at least some of the Pye/Reprise material has been leased out to Sony.  (Great news for me, since I’m able to download 15 songs from my library free of charge every week, and Sony’s catalog – which includes all of the Columbia/Epic, RCA, and Arista labels’ output – is included in the deal.)  You’re not going to find an absolutely complete compilation, but there are a lot of good ones.

Here’s the best one available in the States – unfortunately, not available for download.

It isn’t perfect – the studio hit version of “Lola” isn’t here, replaced by the live version from One From the Road – but at 48 songs, it’s darn good.  It leans more toward the songs that were hits in America (so songs like “A Rock ‘n’ Roll Fantasy” and “Destroyer” are here, neither of which charted in the U.K.).  It’s not available for download (I’d love to know why), but at $11.19 for the two-disc set from Amazon, it’s worth the purchase.  All of the five labels are represented here except MCA.

Here are the rest (links go to the Wikipedia pages):

The Kinks Greatest Hits! (1966) – Reprise did the same shuffling of British album tracks for the American editions that Capitol did with The Beatles and London did with The Rolling Stones, so the first few Kinks albums are an utter jumble today.  This album, released in late 1966, reflects songs from the first three British albums and a few singles.  Never issued anywhere but the United States, and out of print today.

Well-Respected Kinks (1966) – Pye issued their own greatest hits set the following month, with a different track listing.  This did make it to CD in the U.K. a few years ago, but it doesn’t appear to be available for download.  A second U.K.-only compilation, Sunny Afternoon, was released the following year.

The Kink Kronikles (1972) – Reprise gave the band what seemed to be a pleasant farewell after they failed to renew their contract with the label, even though the band had no input on this release.  Kinks fan and music journalist John Mendelsohn came up with the track listing and liner notes, and it’s only songs from 1966 to 1971 (after the songs on The Kinks Greatest Hits!).  It’s really quite good, even if it paints an incomplete picture of the band’s tenure with the label.  Not available for download, at at $21.96 for the two-CD set (if they’d dropped one track, it would have fit on one disk), it may not be the best choice now, but it’s worth picking up in a used CD store.

The Great Lost Kinks Album (1973) – And the following year, Reprise issued this album, consisting of flotsam and jetsam recorded between 1966 and 1970 (“Plastic Man” is the only song of interest, and it can be found elsewhere).  Ray Davies sued the label, and they put it out of print two years later (although there was a U.K. CD reissue a few years back).

Celluloid Heroes – The Best of the RCA Years (1976) – Well, since the RCA years weren’t very good, this is a little of a misnomer.  They only had one British chart hit (“Supersonic Rocket Ship”) and had no hits in the States.  So this is pretty skipabble, unless you want every release the band ever had.  $9.99 for the download on Amazon and iTunes, now out of print.

Come Dancing With The Kinks: The Best of The Kinks 1977-1986 (1986) – The list of artists who can’t stand Clive Davis is long and distinguished (and thank goodness he was fired at Columbia before he got his hands on Bruce Springsteen), but Ray Davies ain’t one of them.  When The Kinks signed with the label, Davis recommended to Davies that they stay away from concept albums (which weren’t working), and that began a Kinks revival that made them a popular act in the U.S. during their tenure at the label.  This set comes in three different versions:  a 19-track two-album vinyl set and a 16-track one-CD set, both released in 1986 (because at that point the limit to a single CD was 72 minutes at the time), and a revised 18-track one-CD set released by the Kinks’ label Konk in 2000 (now reissued through Sony, which has Arista Records in the fold).  Both the CD and vinyl versions are out of print, but the 18-track set is available for download, and even though it’s only songs released on Arista (“Lola” and “You Really Got Me” are live versions issued in 1980 as part of One From the Road), it’s definitely a worthwhile one-disc purchase.  $10.99 for the download on Amazon and iTunes.

Lost & Found (1986-1989) (1991) – Of course MCA had to released a best-of, even though the band only released two studio albums and another live album there (so “Apeman,” “Living on a Thin Line,” and “Give the People What They Want” are live versions).  Leave it to UMG to be the only holdout for the other hits sets.  $7.99 for the download, but if you’re that much of a fan, you’re probably better off searching out the original CDs (Think Visual, the first and best of their two studio albums, is available for download, but UK Jive is not).

The Ultimate Collection (2002) – This was only issued in the U.K. (I think), but I burned a copy from a library disc (bad me!) before The Essential Kinks came out.  It’s just as good, with the track listing leaning more toward the British hits.  Instead of a straight chronological order, the first disc has the bigger hits, and the second disc the more popular album tracks.  Out of print, but worth searching out (it seems to be a bit more expensive than Essential Kinks).

Picture Book (2008) – Six discs, encompassing the band’s entire career (excepting the MCA albums, of course).  I’d probably get this before The Anthology as listed below to get one all-encompassing set, but it’s out of print, unavailable for download, and used copies appear to be somewhere between one and two hundred dollars apiece.

The Anthology 1964-1971 (2014) – Five disc-box set, with 20 unreleased tracks.  I don’t have this – it’s $62.24 for the box and $69.99 for the download on iTunes only – but that’s an awful lot of music focusing only on their earliest years.  Still, I’ll probably snap it up if I see it cheaply; the studio albums from those early years are a little harder to come by cheaply than the others (Kinda Kinks and Kink Kontroversy appear to only be available in two-CD versions with lots of extra tracks for over $25).

Classics: The Best of The Kinks 1964-1970 (2014) – another one-disc set from the Pye/Reprise years, except it’s only available for download.  Perfectly well chosen, and probably a better choice for the novice than The Anthology.  Still, it’s about the same price as The Essential Kinks ($11.49 on Amazon, $11.99 on iTunes), so why not get the bigger collection?

Ray Davies has no solo best-ofs, but there’s an interesting import, Waterloo Sunset: The Best of The Kinks & Ray Davies ($22.12 on CD, no download), that includes a few solo songs (some aren’t really solo; they’re with the Crouch End Festival Chorus).  Dave Davies recorded quite a few solo albums over the years, and for those who really want to hear more, Hidden Treasures ($12.34 on CD, no download) should do the trick.

And here’s the list of chart hits for The Kinks in both the States and the United Kingdom, and which of the two recommend two-disc sets (Essential Kinks and Ultimate Collection) have what.

Posted by Curt Alliaume at 7:39 PM