If You're Only Going to Buy One Greatest Hits Set From... Crosby, Stills, Nash and Young

This is actually going to be a long one – not because there’s a lot of CSNY hits sets out there (there aren’t), but because going over their solo stuff will take some time.

I suspect we’ve heard the last of the four of them performing together (of course, we’ve written them off before).  In 2014, Crosby criticized Daryl Hannah (“a purely poisonous predator”) after Young had left his wife of 36 years to start a relationship with the actress (who’s now 55, so get the image of the mermaid from Splash and the geezer Young out of your head); he apologized a few months later, but the damage had been done.  Meanwhile, Nash (who had been critical of both Young and Crosby in a 2013 autobiography), announced that CSN was over earlier this year, criticizing Crosby using language not generally read in newspapers or heard on television.  I suspect they’ve said this to each other in person before (and I wonder, given all of them are in their 70s, how much of it is cranky old guys with a little bit of dementia sinking in), but still, I wouldn’t hold my breath on any new material coming.

My opinions of the band have changed over the years – I took a Rolling Stone critic seriously in 1980 when he described their harmonies as “pinpricks to the brain.”  Between that and a fraternity brother being a Neil Young uberfan (although his love was tested after Trans came out), I avoided them during most of my teens and early 20s.  But I came around after taping Young’s Decade compilation and Freedom came out, which introduced me back to the rest of the group.  And my fondness for the group was cemented during their 2002 appearance at the United Center:  they had a great backup band (keyboardist Booker T. Jones and bassist Donald “Duck” Dunn of Booker T. & The MG’s, plus Jim Keltner on drums) and played a great set (including several then-unreleased Neil Young songs, plus the Byrds’ “Eight Miles High” and Buffalo Springfield’s “For What It’s Worth”).  Young was at the top of his game, and it’s possible the three-hour plus concert would have gone longer had (reportedly) Crosby not gone over to Young during the encores and pointed at his watch.  If only that concert were available…

There’s no easy way to say this:  all the hits choices stink, for various reasons.  As you might have gathered, these guys can be pretty bull headed sometimes, so getting them to agree on what to put on a disc isn’t easy.  Here’s what I would get first, given the choices now available both in print and for download (all links lead to the corresponding Wikipedia pages): 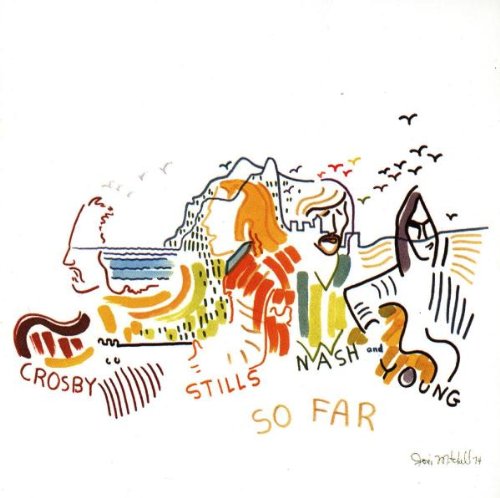 This was issued in 1974 (in time for a tour) after the group had released just two LPs and a single (“Ohio”), so all of the group albums after this are unrepresented (and there’s some good stuff there).  Five songs are from Crosby, Stills & Nash (their debut) and four are from Déjà Vu (their first studio album with Young).  But I’ll go through the remaining albums and explain why this is the best option (hint:  because Neil Young allowed his songs to be used).  $5.99 for the CD on Amazon, $9.49 for the download.

Replay  (1980) – This appears to have only been manufactured as a vinyl album and cassette, and it’s really weird.  Stills and Nash were getting along well and working together at the time (Crosby was in the midst of his cocaine madness, and Young wasn’t speaking to the others), so they proposed a future Stills-Nash project to Atlantic Records.  (Crosby and Nash had recorded a number of duo albums in the 1970s, but that project had pretty much reached its end.)  Instead, Atlantic let the two assemble a greatest hits set, which included no Young material, three solo Stills songs, one from the Crosby-Nash duo, and skips five of the first six singles by CSN and CSNY (“Marrakesh Express,” which was left off So Far, shows up here).  Crosby called it “an obvious money trip,” and he’s not wrong.  Weirdly, it can be downloaded for $9.49 on Amazon – there are a couple of alternate mixes on the album, which gives it some collectable value.

CSN (1991) – Not to be confused with the 1977 studio album of the same name, this is a four-disc box set featuring every different combination of the foursome except Neil Young solo (which is why it’s just called CSN).  Young’s at least present on some of the songs (don’t worry, “Ohio” and “Helpless” are here), and it’s basically a treasure trove for fans.  It even went platinum (which means less than you think; since it’s a four-disc set every sale counts for four of the 1,000,000 copies needed for platinum status).  It’s outrageous that this isn’t available for download but the half-assed Replay is; if anybody at Atlantic/Warner Brothers has an explanation for this decision I’d sure like to hear it.  Let’s put it this way:  if this were available for download, this would easily be the choice over So Far. The good news is it’s $15.52 for a new copy on Amazon (but they claim to have 12 left) – but that may mean Amazon’s clearing out the warehouse (used copies are selling from individual sellers at similar prices).  I burned a copy from the library edition ages ago; I think I’ll have to claim one of the remaining 12.

Carry On (1991) – Two-disc distillation of the CSN box set; available almost everywhere except America.  There are even less copies of this at Amazon than the CSN box, and it costs more, so why bother?

Greatest Hits (2006) – The most recent compilation would be an option if it weren’t completely Neil Young-free –he doesn’t appear on any of the songs, apparently (three of them are from Déjà Vu: “Our House,” “Teach Your Children,” and “Carry On/Questions”); frankly, there’s no point calling anything without “Ohio” a greatest hits set.  All of the songs are from their first four studio albums; their last four are completely unrepresented (they couldn’t even dredge up some live versions?). $12.49 for the download (in fairness, this is nearly twice the length of So Far), $9.00 even for the disk on Amazon.

Demos (2009) – Exactly what it sounds like; not the originally released versions.  I’ve included this to make sure there’s no confusion.

Now, as for solo hits sets – they’re primarily box sets (and, obviously, there will be overlap with the CSN box).

Crosby:  Voyage (2006) is pretty good.  Three discs, including a few Byrds songs (“Everybody’s Been Burned” is a person favorite) and an alternate take of “Have You Seen the Stars Tonight?” performed with Paul Kantner’s early version of Jefferson Starship.  Moreover, it’s a bargain at $18.99 for the download (if you must have the physical set, it’s over $43 on Amazon).  No other hits sets from him solo, but of course there’s plenty of Byrds compilation options, as I’ve noted here; I’ve listed some Crosby-Nash options below.

Nash:  Reflections (2009) is also good, although not nearly as cheap ($28.49 for the download, $56.59 for the three-disc set).  Nash also throws in three Hollies songs for balance.  Actually, Nash compiled the box sets for Crosby, Stills, and himself (at a time when he was better disposed toward the others). Obviously, there are lots of Hollies compilations available (note that Nash was only with that band for the first few years, plus a short-lived 1983 reunion when it looked like CSN was kaput).  Finally, there are two best-ofs from the Crosby/Nash duo:  1978’s The Best of Crosby & Nash, encompassing their years on Atlantic Records, probably has the stronger material (it includes three solo songs, in addition to much of 1971’s Graham Nash David Crosby album), but it’s never been available on compact disc or for download. 2002’s The Best of Crosby & Nash: The ABC Years reflects their material after jumping to ABC Records in the mid-1970s (the label collapsed around the same time Crosby’s cocaine issues made working together problematic – not that the two events influenced each other) and comes from two studio albums and a live set; it’s $9.49 for the download and $14.99 for the CD, and probably will only be of interest to the diehards and completists.

Stills:  Carry On (2013) is Stills’ box; it’s more expensive than the others primarily because it’s four discs instead of three – unlike Crosby and Nash, Stills’ group prior to CSNY, Buffalo Springfield, was also with Atlantic/Warner Brothers, so the label didn’t have to license their songs (The Byrds and Hollies were both with Columbia/Sony, which is why only three of their songs were on Crosby and Nash’s set – but hey, it’s better than nothing).  Consequently, there are 11 Springfield songs on the set, along with a couple of very early efforts, and the usual shuffle of material from his solo years and with various CSNY configurations.  $37.99 for the download, $41.66 for the physical box set.  Still Stills is an out-of-print set (probably never on CD) from his solo Atlantic years, while Turnin’ Back the Pages does the same for his years on Columbia (and includes selections from a one-off album Stills made after Buffalo Springfield collapsed but before CSN started, Super Session with Al Kooper and Mike Bloomfield); it’s not available for download but physical copies can be found.

And then there’s Maude Neil Young, who’s released 38 solo albums of original material, but so far has only released four compilations, three of which contain Buffalo Springfield and/or CSNY material.  He’s been planning for decades to release a bunch of box sets, but so far only one has appeared.  I think Young will probably merit his own post when and if a second box set appears (it’s been promised on and off for the last seven years), in the interim you can’t go wrong with Decade (1978), a three-album/two-CD compilation of his first 10 years; Greatest Hits (2004) seems like a decent sampler as well.
Posted by Curt Alliaume at 12:58 PM