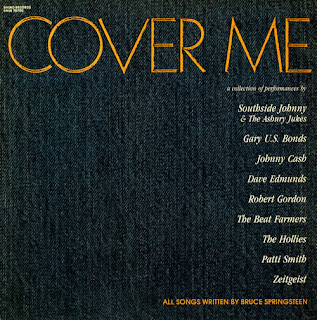 In honor of Bruce Springsteen's new memoir, Born to Run, here are some of the more unusual, offbeat, unknown and in some cases wildly great cover versions of the Boss's catalog. I've deliberately avoided obvious choices like Patti Smith's "Because the Night" (especially since her version is essentially a collaboration more than a cover) or versions already well-known (at least to fans) by artists like Dave Edmunds and Gary 'U.S.' Bonds. I'm hoping that even the most ardent students of Springsteen's oeuvre will find at least a few surprises here.

This song off 1992's Lucky Town was covered by the great Dion DiMucci ("Runaround Sue", "Abraham, Martin and John") on his 2000 album Deja Nu . Bruce is a big Dion fan and even contributed to that album's liner notes. This is Springsteen as doo-wop, delivered only as Dion could do it.

Bettye LaVette was born in Muskegon, Michigan in 1946. She released her first single at the age of 16 and went on to an impressive and busy career that included a stint with James Brown, several R&B hits in the 1970s, and performed for six years on Broadway in the hit Bubbling Brown Sugar. Here she takes "Streets of Philadelphia" and turns it into a howling cry of pain and grace.

8. Aram, "Something in the Night"
Speaking of howling, this track in its original form on 1978's Darkness on the Edge of Town is alternately sung, snarled, and choked out by Bruce in a tour-de-force of vocalizing, and for my money remains the searing heart of  Darkness. Here, Aram (Arslanian) takes the song and turns it into a drawling, sprawling country chugalong that remains no less affecting than the original. And his band is hot as a pistol.

I first discovered this version on a 1986 album from Rhino Records entitled Cover Me, which featured the earliest cover versions of Bruce's work from performers like Greg Kihn ("For You") and The Hollies ("Sandy"). Though there have been probably at least a dozen "Springsteen Tribute" albums over the years, this was one of the first (if not the first), and is notable because many of the songs were recorded before Springsteen was superstar famous, which liberated these cover versions from being 'tributes' and instead they stood simply as products of the artists who covered them. A marvelous example of this is "Atlantic City", recorded by the Reivers (at the time under the name Zeitgeist), who picked it up and ran with it. There have been several covers of "Atlantic City" since. but for me this remains the best.

6. Mrs. Fun/Tina and the B Side Movement, "Janey Don't You Lose Heart"

Originally released by Springsteen as a b-side to the single "I'm Goin' Down" from Born in the USA, "Janey" was covered by Mrs. Fun and co. on a 1997 Bruce tribute album that also featured Aram's contribution above. This is a sly and sultry take on one of Springsteen's prettiest songs, and adds to my belief that some of the best cover versions of his music have been performed by women.

4. Mavericks, "All That Heaven Will Allow"

3. Crooked Fingers, "Mansion on the Hill"
Crooked Fingers was a solo project formed by singer Eric Bachmann in the wake of the demise of his previous band, Archers of Loaf. Here, he takes a similarly minimal approach to this track from Bruce's 1982 album Nebraska, adding a swirl of electronic sounds and percussion that makes the song as dreamlike as a childhood memory.

Hey, what did I just say about say about women doing the best covers of Springsteen songs? Here's further proof. Patty's grief-stricken vocals tell a different version than Bruce's, originally released on 1981's The River.

Had to save Springsteen's greatest song for last. There have been several memorable covers of "Born to Run" over the years, including versions by Wolfsbane, Suzi Quatro, and Frankie Goes to Hollywood (no, really), but what better way to top this list than everyone's favorite lost-in-the-jungle 50s band?