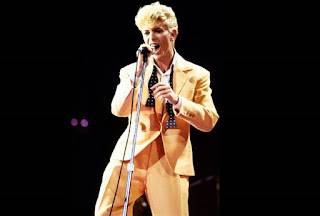 The way I started listening to The Beatles:


Back in the summer of 1973, WNEW Channel 5 television in New York (back before it was owned by Fox – at that point it was an independent station) reran old episodes of the cartoon series The Beatles from the 1960s.  Now, I had heard Beatle songs on Musicradio 77 WABC, but since they didn’t always front- or back-announce who it was, I often didn’t know.  The cartoon was cheesy – well, it was average by 1960s standards; today it would be considered pretty awful – but there were always two songs on every show.  Watching every day allowed me to make connections (“Oh, they did ‘Eleanor Rigby’?  And ‘We Can Work It Out’?  Cool.”)  By the end of that year, I had bought The Beatles 1962-1966 (a.k.a. the Red Album, the first of their two-LP greatest hits sets) and gotten The Beatles 1967-1970 (a.k.a. the Blue Album) as a birthday present.  That allowed me to start going through all the old songs, and then picking out the best albums to buy.


David Bowie is a good example of a musician who benefits from the same method of discovery.  Most of his albums differ greatly from one another – if you like Aladdin Sane, you may hate Heathen; if you dug Let’s Dance, you may not be interested in Ziggy Stardust.  But start with a good, wide-ranging greatest hits set to figure out what’s best for you.


As you might expect, Bowie’s been with a bunch of labels (in America, my count is Deram, Mercury, RCA, EMI America, Savage, Arista, Virgin, Columbia), but the good news is Bowie seems to own all of his back masters except for his very first album and a couple of singles before that (all of which were recorded between 1964 and 1967; they have little to do with his sound since then), so most of the anthologies are pretty complete.  And even his latest anthology has a smattering of the early material.  (Actually, it looks like he’s licensing out his material now – Columbia is the latest winner.  Good for me; our library allows five song downloads weekly, and Columbia participates in this.)


I thought there was only one obvious choice, but apparently record company politics have trumped common sense, so the best of the best-ofs is actually the newest and longest: 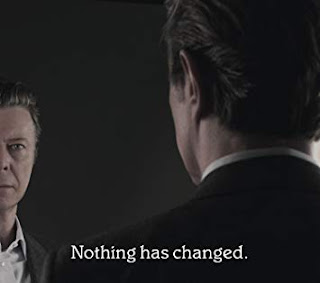 
was going to say something else until about five minutes ago, when I took a good look at what Amazon was selling – more on that in a moment.


In any case, while this is a lot of Bowie, it’s also pretty much everything from his whole career.  59 songs (on both the 3-CD set and the MP3 download – some idiot at Amazon didn’t count the songs on the CD correctly, but a close look at the listings shows they match the MP3 download).  The only quibbles I have so far are a) the liberal use of single edits over the album versions, which is a recurring issue with his hits sets (I don’t know how it was decided to lop 40 percent of “Young Americans” from the album version back in 1974, but it sure is annoying), and b) “John I’m Only Dancing” is gone altogether.


Both the CD and the MP3 download are $19.99 on Amazon (actually, the CD is $19.88, but obviously there will be shipping), which for three CDs is a great deal.  Me, I’d buy the CD, which comes with a book of some sort (I haven’t actually gotten this yet, of course – I could download it free from my library over the next three months, I suppose) over the MP3.  Note it’s in reverse chronological order, which I find infuriating as hell, but if you download the MP3 files, there’s nothing stopping you from reversing them right back.  And you can also spend an extra buck and download the full-length “Young Americans” off the original album of the same name.


One negative point:  there’s also a two-CD version with 39 songs, a two-LP (vinyl only) version with 20 songs, and a one-CD version with 21 songs (the latter is, in theory, only available in Japan, Argentina, and Mexico), all of which contain the same title (covers are shown above; the one I'm recommending is at the right).  To which I say, What the heck?  Why on Earth would Columbia, or Bowie, or whoever, think it’s a good idea to release four different products under the same name?  I don’t care if different configurations are going to different countries; in this day and age most people are buying their music on the Internet, not at a record store, and there’s no guarantee that the seller is listing the item correctly (for proof, see my note about the track listing for the regular version two paragraphs back), and it’s certainly easy enough to get items issued specifically for one country in another.  (Like when I bought that Bangles greatest hits set, issued only in Europe, when I was in Singapore.)  God forbid you should buy it off eBay or some other third-party seller (“Gee, I thought it had three disks.  Don’t give me bad feedback!”).  It turns out this is a recurring theme of Bowie’s hits collections:  I’ve found at least three that have been issued with varying set lists under the same name, so be very, very careful about what you buy.

Rant over.  Now, let’s go back to the 1970s and look at his other anthologies.  Links go to Wikipedia entries.


Changesonebowie (1976) – this actually may be his biggest selling album in the States, and it’s a good one.  11 songs and over 45 minutes long (that was good for vinyl, although it sometimes created problems if you were making a tape – anyone out there remember C-90s?), with all the great hits.  Of course, you have to remember Bowie had only made top 40 three times to that point – standards like “Space Oddity” and “Diamond Dogs” didn’t even chart.  Anyway, this was available on CD for about a minute and a half in the 1980s, until Bowie shifted his catalog over to Rykodisc.  Includes the first version of “John, I’m Only Dancing,” which up till then was only issued as a single – actually, early vinyl pressings had a different version with a Bowie sax break.


Changestwobowie (1981) – If Bowie hadn’t officially left RCA by the time this was released in November 1981, he certainly had one foot out the door.  10 songs, 44 minutes, marred only by the fact that he hadn’t had any top 40 hits since the first hits disk (and of the three US chart hits he’d had, only two are included – where’s “TVC15”?).  Also released on CD for a moment in the mid-1980s. And it had “John, I’m Only Dancing (Again),” which is a completely different song, also only available to that point as a single.


Golden Years (1983) and Fame and Fashion (1984) – released less than a year apart, along with the Ziggy Stardust: The Motion Picture soundtrack, all by RCA, in order to hitch a ride on the Let’s Dance gravy train (that album was his first with EMI America).  These releases, to me, fall under the categorization The Rock Yearbook 1986 bestowed upon a 1985 release of videos and concert footage from Bowie’s 1983 Serious Moonlight tour – “absolutely last chance, everything must go, free salad tongs with every purchase.”  (I really wish I’d kept that book…)  They also noted Bowie’s lemon custard-colored hair from that period, which was carried over onto both of the album covers, thus further misleading buyers.  Golden Years is a mishmash of mostly nonhits, Fame and Fashion pulls the best of what can be pulled off the two Changes hits sets and throws it onto one disk.  They’re both out of print.


Sound + Vision (1989) – okay, now we’re talking.  Bowie had leased his back catalog of the RCA years to indie Rykodisc, who created this pretty amazing (for the era) three-CD set, plus a CD-Video (or CD-ROM, depending on when you bought it) set which sold hundreds of thousands of copies.  Reissued in 2003 by Virgin/EMI with a completely different track configuration, cover, and no video component, but the same name (why call it Sound + Vision if there’s nothing to watch, EMI?).  I didn’t buy one then, but I bought a copy the Naperville Public Library decided they no longer wanted for a dollar a few years back – I’ll have to take a look again to see which version I’ve got.


Changesbowie (1990) – this is actually still available, and when it was released it was a pretty good option (the best of the RCA years, plus the Let’s Dance hits and “Blue Jean.”  A plus:  the full-length album versions are used here for everything except the Let’s Dance songs, which in fairness average nearly six minutes apiece.  On the negative side:  “Under Pressure,” his 1981 hit with Queen, isn’t here (probably record label issues), and Bowie thought it was a good idea to remix “Fame” to make it sound more current.  Thus, “Fame ‘90” – which I don’t think anyone wants to hear again.  Since it stops after “Blue Jean,” it really doesn’t cover all the bases.


The Deram Anthology 1966-1968 (1997) – Universal Music Group (not surprisingly) has kept this in print, since Bowie doesn’t control most of the music on it.  It’s a bunch of singles he made in the years indicated, before he was even David Bowie (at that point he went by his given name, David Jones – until some little guy from The Monkees made him decide to change it).  “Space Oddity” is here, but that’s it for hits.


Best of Bowie (2002, more or less) – and here’s another one that irritates me.  The two-disk version I own would have been my pick – 38 songs, covers everything up to 2002, and I’d live with the truncated versions if the two-disk set was still available.  At least on Amazon, it’s not.  Here’s the lowdown from Wikipedia:
In each of the 21 territories that the album was released, it was given its own track listing, based upon which songs were most popular locally. In a number of countries, there were two versions – a single disc version, and a double disc version. All in all 63 tracks appear in at least one of the 20 different versions. The country the edition came from can be identified by a small national flag on the spine, except for the Argentine/Mexican, Eastern European and UK editions, which are "flag-less". [My two-disk version has no flag – of course, I got mine from BMG Music Service (R.I.P.).]
All the tracks are digitally remastered either from 1999 or, for the single edits, 2002, with the exception of "Under Pressure", which is also at a lower volume than the rest of the disc.
Swell.  Anyway, if you can find the two-disk set, fine, but make sure you buy it from a used-CD brick-and-mortar store, because you can’t be sure what you’re getting otherwise.


iSelect (2008) is exactly what it sounds like – an anthology chosen by Bowie, mostly from the 1970s.  Originally a giveaway with a 2008 edition of The Mail on Sunday in the UK, it’s an interesting selection, but you’re probably better off getting a hits collection or the original albums than this.


Here’s what I’ve put on my one-disk best-of.  Two caveats: I would probably make different selections today, and I’m as much of an idiot as the people who compile his CDs; I have the single edits of “Young Americans,” “Golden Years,” and “Heroes” here too.

Posted by Curt Alliaume at 5:39 PM