I figure I’ll review all four members of The Beatles individually, and then I’ll look at them as a group.

And yes, I remember John Lennon’s death as if it were yesterday.  But it took me years to buy a solo album (by 1983, the people who had been buying Double Fantasy in the weeks after his death were dumping it on used record stores), and seven more years to buy a greatest hits set.  Don’t wait that long – his solo career had its peaks and valleys and ended much too soon, but it’s still worth exploring.

Unfortunately, Capitol Records – or I guess now Universal Music Group, my favorite whipping boy among the major labels – has decided only one one-disk set should be available for download, and it’s really not that good (more on that later).  So, I’m going to say let’s spend a little more money here - Lennon's music is worth it. 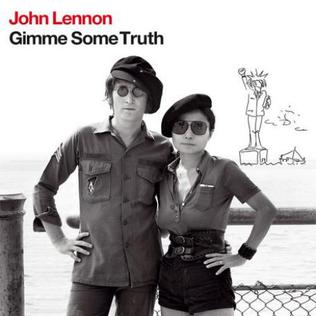 This one is divided into four sections:  “Working Class Hero” (political stuff, or anything with a message – everything from “Imagine” to “Give Peace a Chance” to “Steel and Glass,” his diatribe against former Beatles manager Allen Klein, is there), “Woman” (songs relating to women, mostly love songs but also some of his music about his late mother, Julia), “Borrowed Time” (everything else), and “Roots” (oldies from the 1960s and before; his 1975 album Rock ‘n’ Roll is here in its entirety, along with some live cuts).  For some fans, this may be the only Lennon purchase they need make.

Other Lennon hits sets through the years (the links go to Wikipedia):

Shaved Fish (1975) – this was the only Lennon hits set for quite some time, and it’s apparently still around on vinyl if you’re a collector.  Twelve songs, mostly hits; only Rock ‘n’ Roll isn’t represented.  “Happy Xmas (War Is Over),” “Give Peace a Chance,” and “Instant Karma!” made their first appearances on LP here, although if you wanted a full version of “Give Peace a Chance,” you’re out of luck (two partials instead).

The John Lennon Collection (1982) – if this was still in print, this would definitely get my recommendation.  17 songs when originally released on vinyl (19 on the 1989 CD re-release), and six of the seven songs from Double Fantasy are included, since it was released on Geffen Records, rather than Capitol.  (Lennon switched to Geffen for Double Fantasy, and David Geffen managed to license eleven songs from Capitol for this.  All of Lennon’s music was reacquired by Capitol in 1989, so the CD was issued by them.)  Unfortunately, now out of print, even though it’s actually neck-and-neck with Double Fantasy for his biggest seller in the States.

Imagine: John Lennon (1988) – isn’t technically a greatest hits set and isn’t available for download, but is probably worth hunting down (although at $19.99 for a single disk, it’s an indulgence – it was originally two disks on vinyl).  It’s actually a soundtrack from a documentary, and is the only Lennon solo release to mix Beatles recordings and solo work (the foursome usually did a good job of avoiding that).  “Real Love” is also here, which Paul, George, and Ringo either missed or ignored when they added their voices and instrumentation to it a few years later for Anthology 2.

Lennon (1990) – the first of many Lennon box sets; this was given to me in 1993, and I’m grateful, mostly because almost all of his studio albums are included here (all of John Lennon/Plastic Ono Band, nine of ten songs from Imagine, nine of twelve songs from Walls and Bridges, all of John’s songs from both Double Fantasy and Milk and Honey).  This was a not-uncommon trend for the first few box sets of the CD era (both Steely Dan and The Police released box sets with all of their studio albums included), but as record labels realized doing this meant collectors didn’t need to buy anything after that, the practice came to an abrupt halt.  Out of print, of course.

Lennon Legend: The Very Best of John Lennon (1997) – this basically replaced The John Lennon Collection in order to add “Nobody Told Me” from Milk and Honey.  Out of chronological order, which bugs the crap out of me, but that’s my issue.  Not available for download, but it’s still in print on CD – although $18.86 for a one-disk product is pretty pricey.

John Lennon Anthology (1998) – this replaced the Lennon box.  Not really a hits set; this has lots of outtakes and studio chatter, which makes it interesting, but not a necessity to the casual listener.  Also out of print.  Wonsaponatime, also from 1988, is a one-disk distillation of the same box set, and focuses more on the actual music.

Instant Karma: All-Time Greatest Hits (2001) – I had seen this around a couple of times, and figured it wasn’t necessarily authorized.  I guess it was; the intention was to sell it at Sam’s Club and Costco as a low-end “box” set, and looks like it.  The mastering apparently ain’t great.  Out of print.

Acoustic (2004) – Lennon unplugged, I guess.  Not a greatest hits set (although listenable).  Still technically in print, although I think it’ll be gone soon, given it’s going for $23.77 on Amazon.

Working Class Hero: The Definitive John Lennon (2005) – if one disk is too little and four are too many, why not try two disks?  This seems to cover all the bases.  Out of print in the US, but available on Amazon as an import, with a $16.35 list price, thus justifying its title.  I’d get this before any of the one-disk hits sets listed below, and if you’re okay with physical disks, this would probably be a better buy than Gimme Some Truth.

The U.S. vs. John Lennon (2006) – not a greatest hits set; this is a soundtrack of the documentary film of the same name, about when the Nixon Administration thought it would be a good idea to get John and Yoko out of the country.  That worked well.  At $11.38 for the CD on Amazon (no download available) it’s a great purchase, but only two songs from after 1972 are included (“Nobody Told Me” and “Scared”).

Signature Box (2010) – This was a big year for Lennon reissues to celebrate his 70th birthday; this eleven-disk set accumulates all of his remastered studio albums, plus a disk of singles that weren’t released on albums (“Cold Turkey,” “Power to the People,” etc.), and another disk of outtakes/home tapes.  There are a couple of problems here, however:  two live albums aren’t here (Live Peace in Toronto and Live in New York City).  Nor is the stripped-down version of Double Fantasy – Lennon’s voice is single-tracked on that version for the first time in forever, and the instrumentation is pared down to the minimum; if you want that, you have to buy the (reasonably priced) two-disk studio album separately.  (Some collectors are complaining that Two Virgins and Life With the Lions, a couple of avant-garde disks John and Yoko did in the late 1960s, aren’t here either, but I don’t think that’s a minus.)  The other issue is this puppy is expensive; it’s $79.99 on iTunes and $75.99 on Amazon to download (although Amazon at least has the outtakes/home tapes songs available for download individually – now that I’ve said this, they’ll probably block them), and an astonishing $139.45 to buy the physical box set.  Only for the absolutely, positively obsessed.

Icon: John Lennon (2014) – well, you knew this would be coming once UMG got hold of the catalog.  One disk, 11 songs, seven bucks, no downloads. And, as usual for UMG, oddly selected:  the top ten hits “Whatever Gets You Thru the Night,” “#9 Dream,” “Woman,” and “Nobody Told Me” aren’t here, but nonsingles “Jealous Guy,” “Beautiful Boy (Darling Boy),” and “Love” are represented.  Buy it if you’ve run out of other CDs during a long trip.

Posted by Curt Alliaume at 9:53 AM