Summer of '83 - A Nostalgic Ramble

My favorite summer of my youth was 1983. This was because despite the absence of a new Springsteen album (when oh when was Murder, Inc. going to be released?!?) and a new Star Trek movie (Return of the Jedi had to do instead; by the end of the summer I had seen it about 8 times and was sick of it). It was a summer that made few demands on me -- I was a year out of high school, with no serious life goal in mind. I was working as a shift supervisor at a Friendly's restaurant that I considered more a clubhouse and 24-hour social hall than a job. And I was taking a few college classes to make up for my screwing around the previous semester at Seton Hall.


At night I scooped ice cream or drove around with my buddies tossing eggs at various targets, going to the movies, and haunting video game arcades. Overnight I drank beers (at the aforementioned Friendly's) or stayed up till dawn in my little apartment in my parents' basement (that's right, my PARENTS' BASEMENT), smoking cigarettes, drawing comics, reading great novels, and of course playing guitar. I wrote my first real song that summer -- "Someone's Been Sleeping in My Bed", which I may re-record just for kicks one of these days -- and I could not decide whether to be a rock star or a rock star cartoonist. (I'm still deciding.)

But the best, most vivid memories of that summer are the release of an album so original and so seminal that it still haunts me with its impact: R.E.M.'s full debut album, Murmur, the record that launched a thousand hipster bands.


I had never heard anything like it. It was drenched with 60s mystique and suffused with punk, and trying to figure out the lyrics was half the fun. I listened to this album night and day, including during closing at the aforementioned Friendly's, which drove my co-workers nuts. Never mind that they'd all be lining up to buy R.E.M. albums and tickets for the next quarter century or so; I was used to being an unlistened-to prophet in my own country.


I carried Murmur with me everywhere, courtesy of a junked-up portable dual cassette player, which also served as my cheapass recording studio, and Murmur became the main soundtrack to my other jarring cultural discovery of that summer, namely: comic books from publishers other than Marvel or DC. 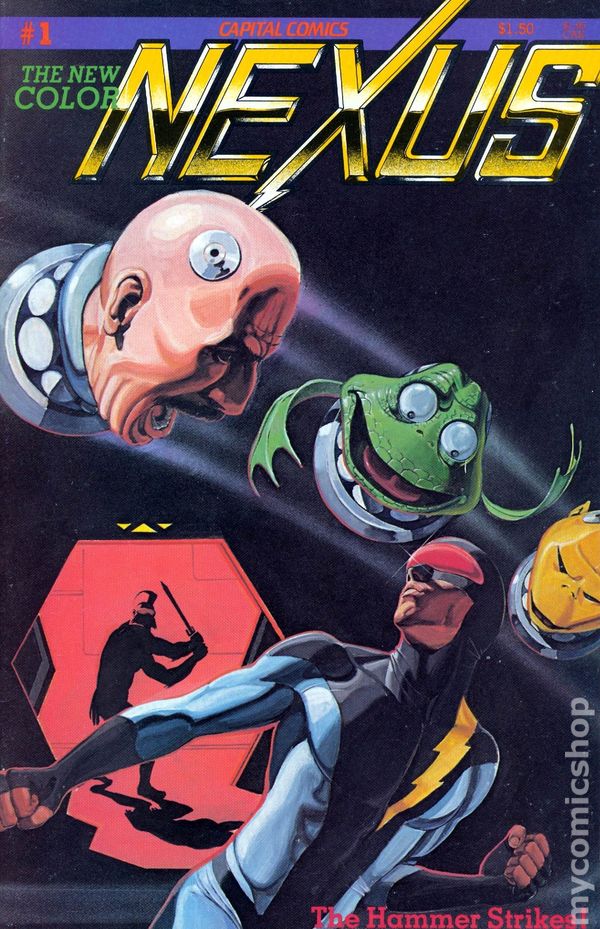 Aside from X-Men, I had dropped all comic books from my reading habits, as the level of suck had grown too much for even me to take. But I still haunted comic book shops, hoping for something new and different, and boy did I hit the jackpot. For weeks, all I did was scoop up every book I could find from new publishers like First Comics and the fledgling Fantagraphics, and to this day I cannot separate Murmur from all those great, offbeat comics. It all captured the moody, humid, escapist feeling I had all that summer, as I cranked Murmur during every excursion to as many comics shops as I could find. It was like ice cream with a brain.

What else? Oh, yeah -- Pyramid Books released a whole pileful of Harlan Ellison books. I bought every single one. A year later, I met Harlan at a comics convention in New York City and asked him to sign my copy of I Have No Mouth, and I Must Scream. He ordered me to say please. I complied.

Anything else? Well, I think I stocked up on a lotta Lou Reed, and for some reason I listened a lot to Fun Boy Three, the Specials spinoff band that really wasn't all that good, and I first read the complete Sherlock Holmes over the entire summer. But mostly, I listened to Murmur, and especially to this song, which I'll leave you with.

Damn. It still haunts me.