I’ll get back to the Beatles’ solo albums in a bit.  Glenn Frey’s death pushes this up.

The Eagles were the rock and roll success story of the 1970s, and that story has continued since then.  None of their albums – studio, live, or compilations (excluding a couple of all-encompassing box sets released in the 2000s) have done any worse than platinum status.  They didn’t always sit well with music critics (but their fans have fought back accordingly, as I discovered when I put forth the argument on Amazon that The Long Run was a pale successor to Hotel California), but they’ve laughed all the way to the bank.


Warner Brothers has generally shown great restraint in issuing hits sets for many of their heritage acts, as evidenced here by the fact that the first two compilations released by the Eagles in 1976 and 1982 are still in print and available for download.  The bad news is that means there isn’t an all-encompassing one-disk greatest hits set available for the band.  Accordingly, you’ll have to get this: 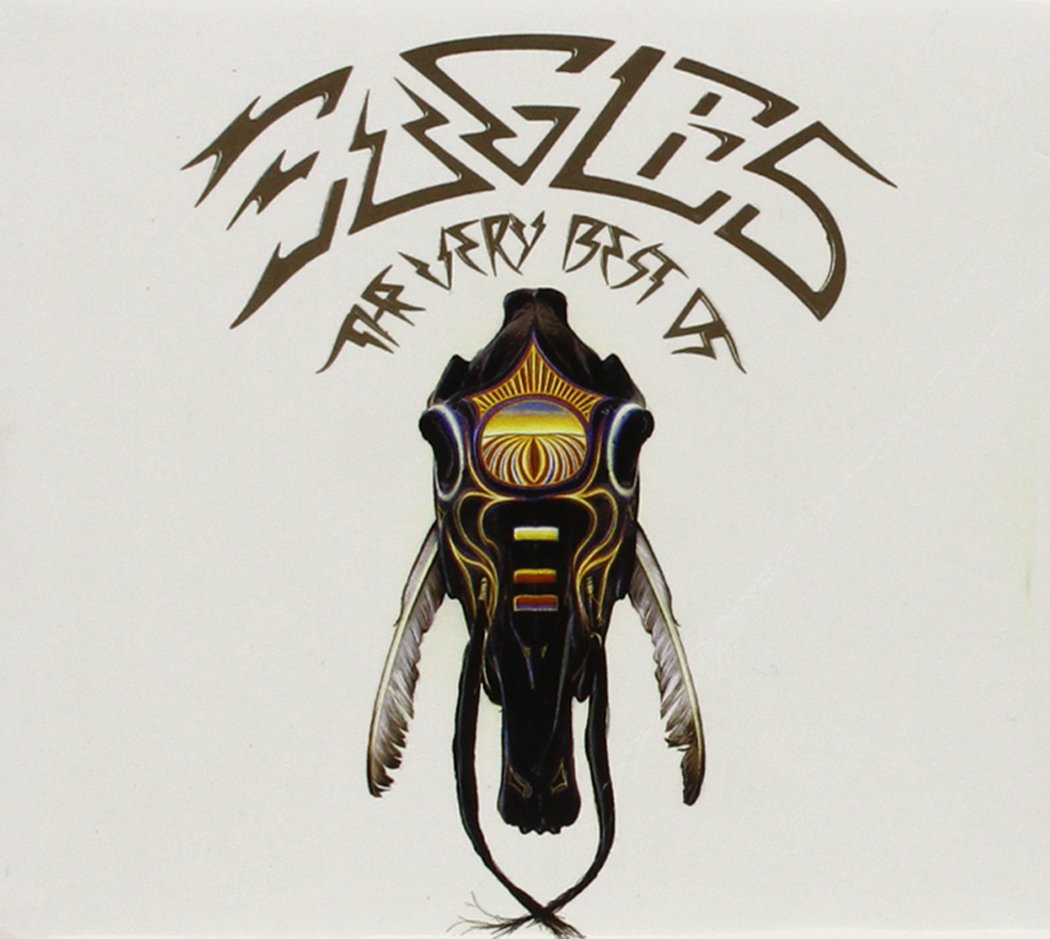 The Very Best of (The) Eagles

I should point out these guys were fanatical about saying the band’s name was “Eagles,” not “The Eagles.”  Not a single album cover issued in the United States uses the definitive article before their name (there are exceptions for albums issued only overseas).  For my purposes, however, I’ll be using “the” to make the writing clearer.


Anyway.  This 2003 release includes music from all of their studio albums, their reunion album Hell Freezes Over, a Christmas single from 1978, and a new song that they recorded specifically for the album (although it was also included as a bonus track on deluxe editions of their 2007 studio album Long Road Out of Eden, which obviously had not yet been recorded in 2003).

Could they have created a great one-disk set?  Possibly.  The band had 17 top 40 hits from 1972 to 1994; if they had included only those 17 and maybe used a couple of radio edits, they might have fit it onto one disk.  However, that’s not the Eagles’ way; they were not happy when Asylum released AM radio edits of “Best of My Love” and “Lyin’ Eyes,” so the chances of them using the same on a compilation are almost nil.

Let me make an important point:  for the one or two of you who might actually be influenced by what I write here, there’s a huge difference in price point between the download and the physical disks.  Amazon is offering the download of this two-disk set for $24.99 (iTunes wants $27.99); the actual two-CD set will cost you $12.97 plus tax and shipping.  That’s not really a tough call, especially considering there are informative (to a point – Frey and Henley tended to edit their opinions a bit as time went along) liner notes as well that you won’t get with a download.

Here are the rest (the links go to the Wikipedia listings):

Their Greatest Hits 1971-1975 (1976) – Considering they didn’t even want to release this one (Henley specifically said “All the records company was worried about were their quarterly reports.  They didn’t give a shit whether the greatest hits album was good or not, they just wanted product”), it’s done okay.  RIAA has certified this as 32.2 million records sold, second domestically behind Michael Jackson’s Thriller.  (Worldwide sales are best guesses.)  Five of the songs were top 10 hits, and only two missed top 40 (“Tequila Sunrise,” which got the nod over “Outlaw Man,” and “Desperado,” which was never released as a single), so it’s pretty well selected.  Good introduction to the band’s early years.

Eagles Greatest Hits, Vol. 2 (1982) – Also known as “Oh crap, it looks like they’ve broken up for good.”  And this one was more of a challenge – how do you create a second greatest hits set for a band who released six studio albums, four of which were already used up for the first greatest hits set?  On the other hand, Warner Elektra Atlantic created one for CSNY with just two albums and a single (So Far), so it could be done here, too.  All of the hits from Hotel California and The Long Run were included, along with “Seven Bridges Road” from Eagles Live (which made #21), and three album tracks (one was from 1974’s One of These Nights, which meant Their Greatest Hits 1976-1980 wasn’t usable).  Henley didn’t like this one either (with some justification; the cover art is hideous), but it’s sold 11 million copies.

The Very Best of The Eagles (1994) – Never released in the U.S. (although it’s sold very well in the United Kingdom and Australia), I’m just including it to show the wording of “The Eagles” – and to point out that there are two compilations with fairly similar titles out there.


Selected Works 1972-1999 (2000) – Three disks of studio stuff/hits (with a few odd outtakes; apparently those are the only leftovers we’re going to get – and they’re not finished songs that were left off the album, they’re more like rehearsals and false starts).  Eagles Live and “Seven Bridges Road” are left off; there’s a new live disk here instead (which include Don Felder’s last recordings with the band).  This might be an option if you want more than The Very Best of; the download price on Amazon is $37.99 ($29.99 for the physical box set), but if you’re that big a fan, you probably have most of it anyway – and you’d be better off downloading what’s missing from your collection rather than the whole thing.

Eagles (2005) – Box set that includes all of the six 1970s studio albums and Eagles Live.  This is now out of print (unless you want to spend a hundred dollars on it on Amazon) and has been replaced by The Studio Albums 1972-1979, which is the exact same thing without Eagles Live.  As a side note, that album may have been a source of contention – it’s known to be overdubbed (producer Bill Szymczyk famously said the harmonies were fixed “courtesy of Federal Express”), so perhaps that’s just as well.  The Studio Albums is only useful for longtime fans who somehow don’t have any of the studio albums on CD – all of the six studio disks are available on Amazon for $9.49 apiece, and the box set is $47.94 (iTunes prices are a little higher, and the physical disks are a little lower), so basically if you buy the box set, it’s buy five studio albums, get the sixth one free.

As for the solo careers:  to my knowledge, there are no solo best ofs from former band members Don Felder, Bernie Leadon, or Randy Meisner, or current member Timothy B. Schmit.  (Meisner and Schmit were both with Poco – Schmit replaced Meisner with that band, as he did with the Eagles – but that’s probably a separate entry in itself.)  Which leaves Glenn Frey, Don Henley, and Joe Walsh.  Please note no Eagles songs appear on any of their greatest hits sets, even in solo versions.

Frey’s catalog has been kind of a jumble – for years, he didn’t have anything available for download on either Amazon or iTunes, well after when every other major artist had made their catalog available.  Also, Frey’s first solo album, No Fun Aloud, was on Asylum records (the Eagles’ label), but after they rejected the followup album The Allnighter, he went to MCA (where former Eagles manager Irving Azoff was running the show) and stayed there for the rest of his career.  Warner Brothers and Universal Music Group (which evolved from MCA) apparently couldn’t agree on licensing, so the greatest hits sets are somewhat incomplete.  Solo Collection at least has his biggest Asylum hit, “The One You Love,” but “I Found Somebody” and “All Those Lies” are nowhere to be found.  Solo Collection is the only one available for download; it’s missing “The Allnighter” (#55 in 1985) and a couple of lesser singles, but it’s at least a decent lineup, and at $7.99 for the download on either iTunes or Amazon it’s a decent price (although it appears to be out of print on disk).  There’s also an import, Universal Masters Collection, available on disk only for $11.18, which has a slightly different track lineup.

Don Henley has released two greatest hits sets as well, but his five-album solo career has been with four different labels (Asylum, Geffen, Warner Brothers, Capitol), and he’s been willing to take long breaks when he’s pissed off at his label or otherwise occupied – he’s put out two solo albums in the 27 years since The End of The Innocence was issued.  Anyway, both Actual Miles (1995) and The Very Best of Don Henley (2009) were issued by Geffen, and the differences are minor:  “Dirty Laundry” is on both, along with all four chart hits from Building the Perfect Beast and all five from The End of The Innocence, and “Everybody Knows,” written by Leonard Cohen.  Actual Miles contains two new Henley songs, “The Garden of Allah” and “You Don’t Know Me at All,” whereas Very Best has three songs from Henley’s 2000 album Inside Job.  Actual Miles is cheaper to download both on Amazon and iTunes, so that’s where I’d go.  Neither “Leather and Lace” (with Stevie Nicks) or “Sometimes Love Just Ain’t Enough” (with Patty Smyth) are on either set, so I’m guessing that’s not going to be rectified down the road.  It would be nice to get two minor hits from Henley’s first album on Asylum, “Johnny Can’t Read” (a scathing indictment of high school education that was ignored in the South and Southwest because he mentioned football as a possible problem) and the title track, but that obviously isn’t going to happen either.

Joe Walsh has had a long, long career (his first album as part of The James Gang, Yer’ Album, came out three years before the Eagles’ first release), and has had a lot of anthologies.  Skipping The James Gang best ofs (some of which don’t feature Walsh on all the songs, and the best James Gang songs are on Walsh’s hits sets, anyway), I would put my money on Joe Walsh’s Greatest Hits: Little Did He Know… (which may also be called The Definitive Collection – my copy has one name on the sleeve and another on the disk; the label name has also changed from MCA to Geffen).  It’s a collection throughout his entire career, which spans a few different labels, and appears to have bagged all the big hits (“Funk #49,” “Walk Away,” “Rocky Mountain Way,” “Life’s Been Good,” “All Night Long,” “A Life of Illusion”), plus the price is right at $8.39.  Unfortunately, UMG has decided not to make this one available for download, so you might be stuck with 20th Century Masters, which is a typical UMG botch – only songs he recorded for ABC Records (MCA’s predecessor in the 1970s) are included, so only the first three hits listed above are available.  There are a couple of early anthologies from the 1970s and 1980s that are totally out of print and aren’t all-inclusive either.  The two-CD set Look What I Did!, from 1995, is pretty expensive ($27.89) and is probably more than all but the diehards need.  It also has a huge share of Walsh’s goofier songs (chemically enhanced from the late 1970s to 1995), including “Theme From The Island Weirdos,” “I Can Play That Rock & Roll,” and “I.L.B.T.’s” (Google it).
Posted by Curt Alliaume at 11:26 AM