If You're Only Going to Buy One Greatest Hits Set From... George Harrison 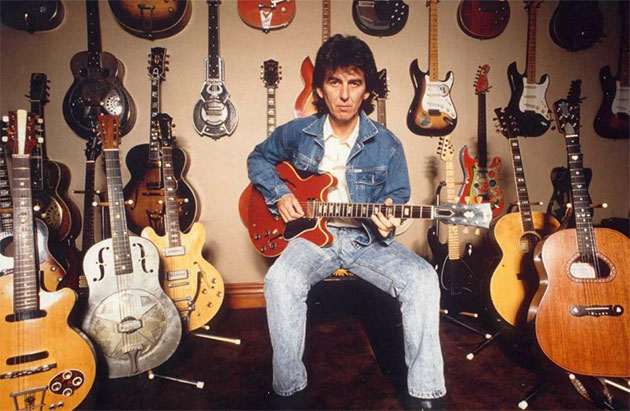 It’s been almost a year, but I finally got around to George.  George Harrison’s contribution to The Beatles was huge (he’s a significantly better guitar player than either John or Paul), but he wasn’t nearly as good a singer as either of them, and he was pretty much limited to one or two songs an album.  John and Paul naturally favored their own stuff (not that George’s material was necessarily considerably better), and their longtime producer George Martin admitted after the breakup that he wasn’t very encouraging either.  So, Harrison would contribute his one or two songs to each album, and that’s the way it went until the breakup.  Harrison promptly issued All Things Must Pass, a three-album set (two CDs), featuring two standard studio albums (many songs were saved up from the Beatle years) and album of jamming.  Among the players:  most of what became Derek & The Dominos, Ringo Starr, Billy Preston, all of Badfinger, Peter Frampton, Gary Wright, Peter Frampton, Dave Mason – heck, even a pre-Genesis Phil Collins.  Between this and the all-star Concert for Bangladesh in 1971, George appeared to be the Beatle to watch for.

However, all of his remaining studio albums fell into the same pattern – usually one or two great songs, and a bunch of average ones.  (It’s not that easy to crank out 12 or 24 great songs a year – fortunately for the Beatles, they had three songwriters.)  George took some long breaks between albums (the posthumous Brainwashed appeared after a 15-year wait), and he wasn’t really interested in the rock and roll lifestyle or going triple platinum annually.

Like Paul McCartney, George (and his widow, Olivia Harrison) has limited the number of compilations released, which helps to make things easier for fans.  Here’s the best of his solo sets:

I wouldn’t say this is the perfect compilation – several hits from the 1970s are missing (“Bangla Desh,” “Dark Horse,” “Ding Dong Ding Dong,” “You,” “This Song,” “Crackerbox Palace”), but since the first half of his career was on Apple/Capitol and the second half on Dark Horse/Warner Brothers, it’s the only way to combine both.  There are some pleasant surprises – all of the songs from the Bangla Desh concert are old Beatles songs (“While My Guitar Gently Weeps,” “Something,” “Here Comes the Sun”), and the iTunes download includes a demo version of “Isn’t It a Pity” along with the full version, which probably makes it preferable. Amazon doesn’t have the download and is charging $14.29 for the CD, iTunes has the download for $11.99.

Here are the rest (links go to Wikipedia):
The Best of George Harrison (1976) – released after George had bolted Capitol, and it shows.  The cover art is hideous for both the British version (color adjustment, people – everything is way too orange) and American version (which was so ugly that Capitol jettisoned it for the aforementioned British version when the album was reissued on CD).  Worse, since George wasn’t under contract to veto the idea, this is the only ex-Beatle best-of to mix Beatle songs with solo songs.  (Admittedly, George only knocked out six top 30 songs during his solo career to that point, but still.)  For years this was the only place to find the studio version of “Bangla Desh” (it’s now also available as a bonus track on the CD rerelease of Living in the Material World), but there’s not much other reason to get this.  Not available for download at all, but still in print and available from Amazon for $13.99.

Best of Dark Horse 1976–1989 (1989) – released toward the tail end of George’s contract with Warner Brothers (he would issue a live album in 1992 with Eric Clapton), this is at least a decent selection (although I’m not sure who decided to ignore the hit “This Song” but include three songs from the 1982 flop LP Gone Troppo).  This is the only Harrison album that contains “Poor Little Girl” and “Cockamamie Business,” which George recorded specifically for this set, or “Cheer Down,” which was a 1989 AOR hit when it was included on the Lethal Weapon 2 soundtrack.  None of those three are available for download today, and neither is this album – George’s catalogue went back to Capitol a few years back, and this album was put out of print.  (I have both this and The Best of George Harrison, but not Let It Roll.)

The Dark Horse Years 1976–1992 (2004) – box set of all five of the studio albums George issued through Dark Horse during his lifetime, plus the aforementioned 1992 live album and a DVD of videos (now available separately).  There are a few bonus tracks, but none of them are exclusive to this set – so you might be better off buying the individual albums.  $83.75 on disc from Amazon, not available for download.

The Apple Years 1968–75 (2012) – the early albums get the box treatment.  This has a few more bonus tracks, plus it includes Wonderwall Music and Electronic Sound, which he made while still with the Beatles (they’re almost all instrumental, and the latter album is primarily on one of the first Moog synthesizers).  Now out of print, and Amazon’s copies from third-party sellers range from $255.48 to $100,000.

Additional note:  for the box sets, you might want to try George’s official site, www.georgeharrison.com.  The Dark Horse set is $90 there and the Apple box is new at $125 (MP3s aren’t available), and there was a popup when I opened the store link offering 15 percent off the first order, which would be a nice little discount.

I should point out that George was very easygoing about guesting on others’ albums – most everybody knows about his work with Cream, John Lennon and Ringo Starr, but there are quite a few people you’d never have guessed he’s worked with (Monty Python, Daryl Hall & John Oates, Belinda Carlisle).  His Wikipedia discography has a lengthy, and probably incomplete, list - you may already have a few unbilled Harrison performances in your collection without realizing.

Posted by Curt Alliaume at 4:34 PM