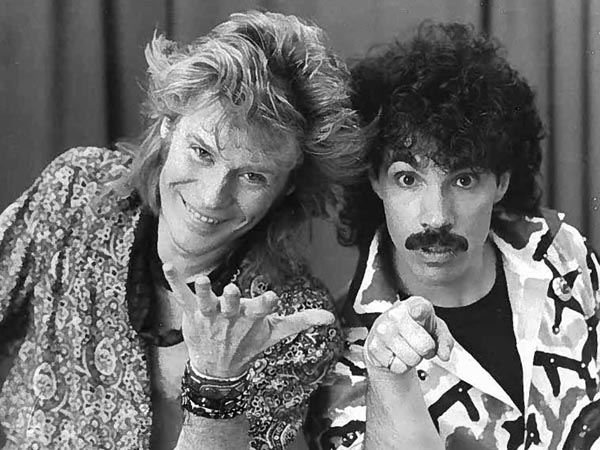 As my college friends will ruefully note, Hall & Oates were one of my favorite bands.  They originally came up in the early 1970s, and released three albums on Atlantic Records:  a folky debut with echoes of Carole King (Whole Oats), a fairly good blueprint for what their future would be like, with a mix of rock and soul (Abandoned Luncheonette), and a let’s-try-something-weird (War Babies).  It took a label switch to RCA for the hits to start coming, first on an occasional basis, and then starting in late 1980 when they started producing themselves, virtually everything they touched (at one point, they had a run of 18 straight top 40 hits, including 12 top 10s and five #1s, between 1980 and 1985).  A three-year break, another label change, and changing tastes ended that run, but their music has word well across a variety of radio formats.

Fortunately, the label mergers of the past 15 years haven’t hurt them much.  All but one of their big hits of the 1970s and early 1980s was on RCA, with a few latter-day hits on Arista – both of which are now under the Sony banner.  With 31 top 45 hits and 22 top 20s, you’ve got a choice of either a two-disc set that will have everything or a one-disc set that will leave a few things out (or use the radio edits).  Since I’m a fan, it’s not a tough call: 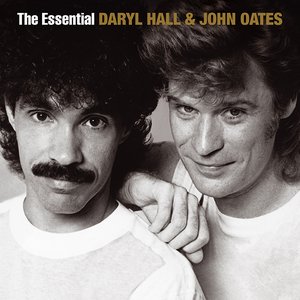 Of those 31 songs to make (or just miss) the top 40, 30 of them are here – the only exception is the “The Way You Do the Things You Do/My Girl” medley they released in 1985 with former Temptations Eddie Kendrick and David Ruffin.  (That grouping ended somewhat acrimoniously; the general consensus was that Hall in particular was sick of Ruffin’s drug-fueled unreliability.)  Anyway, it’s missed, but the loss isn’t crucial.  Three songs from their Atlantic tenure are here, including the big hit “She’s Gone,” which didn’t become a hit until a few years after H&O split Atlantic – and it’s the full-length version, not the radio edit.  In fact, everything here seems to be the album versions – and except for a few songs at the beginning of disc 1 and the end of disc 2, the only non-hit here is their version of “Everytime You Go Away,” which Paul Young turned into a #1 hit (no doubt to Hall’s annoyance, as it’s been a solo spotlight song for him for a long time).

Please note a couple of things:  RCA released this set as The Ultimate Daryl Hall & John Oates a year or two before Sony bought out the RCA catalog and released it as part of its Essential series; the tracks listings are identical.  Sony also did a 3.0 version of this set with a third disc including seven additional songs.  Don’t lose any time searching for this; it contains a minor chart hit from 1977 (“Why Do Lovers Break Each Other’s Heart,” although in fairness this is almost the only place you’ll find this song other than the original studio album), five non-hits from the late ‘70s and early ‘80s, and (inexplicably) a Daryl Hall solo song, “Someone Like You.”  $13.99 for the two-disc version on Amazon, $16.99 for the download.

Here are the other US-release options (links go to Wikipedia entries):

No Goodbyes (1977) – Atlantic Records’ way of scraping up a few more bucks after H&O became a lot bigger on RCA.  It’s not a complete ripoff – one song from Whole Oats and three each from Abandoned Luncheonette and War Babies (including, of course, “She’s Gone,” which had become a top 10 hit by this time).  Three “new” songs were added (these sounds to have been left off Abandoned Luncheonette) to bring in collectors.  With only one hit song, hardly essential, but Atlantic could have done a lot worse.  $8.99 for the disc, $9.99 for the download.

Rock ‘n’ Soul Part 1 (1983) – the only real hits option in the U.S. for a long time, and it still holds up nicely.  RCA leased “She’s Gone” from Atlantic, but due to space limitations used a bunch of radio edits (although they did squeeze in a six-minute live version of “Wait for Me” – the good news is you can’t find it anywhere else; the bad news is it’s hardly a song you can’t do without).  It would have been nice if RCA could have stopped mucking around with the package – the vinyl version was rereleased with a different cover a few years later, which no doubt confused a few people.  The CD version adds two songs left off the vinyl release for space reasons, “You’ve Lost That Lovin’ Feeling” and “Family Man.”  It’s not the first set I’d pick up, but it’s certainly okay.  $9.99 for the download on Amazon (but be sure to get the one with the two songs mentioned above; Amazon seems to have no problem selling both versions as a download for the exact same price), and $6.86 for the full-length CD.

The Atlantic Collection (1996) – Atlantic didn’t have a lot to work with for their H&O reissues, but they sure worked hard with what they had.  This includes five songs from Whole Oats (plus an earlier song, “Past Times Behind,” which had appeared on a bunch of minor-label releases alleging to be from the duo, but were in fact mostly an early Daryl Hall-alone group, Gulliver), eight out of nine songs from Abandoned Luncheonette, and five songs from War Babies, plus two of the three songs previously only available on No Goodbyes (unfortunately the best of them, “Love You Like a Brother,” is left off).  $13.23 for the disc and $11.49 for the download, which probably makes it a better deal than No Goodbyes.

The Very Best of Daryl Hall/John Oates (2001) – If you’re going to get a one-disc set, this is easily your best bet – but it’s isn’t perfect.  “She’s Gone” isn’t here (to save RCA some money), and neither are the two major hits from the end of the career, “Everything Your Heart Desires” and “So Close,” both of which came out on Arista – which wasn’t merged with RCA and Sony in 2001.  There are a couple of single edits (but thank goodness they got in a 12” edit version of one of their stupidest songs, “Adult Education”).  $8.60 for the CD, $10.99 for the download.

VH1 Behind the Music Collection: Daryl Hall & John Oates (2002) – you know, these VH1 thingamajigs really weren’t bad in their time.  This is missing a few key hits (“Private Eyes,” “Did It In a Minute,” “Adult Education,” and “Method of Modern Love,”) but for the price - $7.47 for the disc, $9.99 for the download – it’s not a horrible option, although there are better choices available.  I’d be happier if they hadn’t used it as a launching pad for the never-a-hit “Do It for Love,” as well as a band version of Hall’s solo song “Someone Like You” (retitled “Somebody Like You” for reasons unknown).

The Ballads Collection (2007) – another of the “love songs” discs, except H&O’s songs sometimes are ironic or sarcastic, so that term doesn’t really fit.  Not a hits set, and not something to play if you want to get your groove on – “Go Solo” and “Open All Night” are two of the most bitter songs from H2O, so that will kill the mood.  $9.99 for the download, but $3.99 for the disc – I have a feeling Amazon is clearing out the shelves, so if you need to add something cheap for free shipping, now’s your chance.

Do What You Want, Be What You Are (2009) – geez, it took them long enough to put out a box set.  H&O’s catalog was with Sony by this point; I guess RCA had more Elvis box sets to issue or something.  Anyway, all the hits are here (even “The Way You Do the Things You Do/My Girl”), albeit a few in live versions.  (Daryl Hall mentions in the liner notes for the live performance of “So Close” he thinks Arista president Clive Davis ruined the song by dragging in Jon Bon Jovi to do a song polish, and so insisted to Davis both the rocked-up single version and Hall’s original concept be included on Change of Season.  While Hall’s got somewhat of an inflated sense of himself at times, I agree with him here.)  There’s a full disc of Atlantic and pre-Atlantic material (again, some live), a few unreleased tracks, and some more recent stuff (hint:  you won’t need to listen to the last disc much).  I have listened to this but haven’t bought it yet; I guess I’m waiting for it to either be cheap or gifted.  $39.99 on Amazon either for the download or the box set; go for the physical box as the liner notes and photo section are useful.  (Side note:  I hope Daryl Hall has quit smoking, as there are at least three photos from the early years with a cigarette in his mouth.)

The Atlantic Albums (2011) – this is actually an import.  All three of the Atlantic albums in their entirety, plus the three extra songs, so the only thing missing is “Past Times Behind.”  All for $9.99 on two discs through Amazon.  It’s not a must-have for me, but I’d probably go for this first before one of the other Atlantic-only sets above.

Original Album Classics! (2013) – Sony gives you a cheap way of getting backlist albums.  But, as usual it’s a random shuffle:  the five discs contains Daryl Hall & John Oates, Bigger Than Both of Us, Beauty on a Back Street, Private Eyes, and H2O.  The latter two are full of hits (even though H2O may be one of their lousier albums; Daryl was “going through some heavy changes” according to the liner notes of their box set, but almost every song he wrote except “One on One” was borderline misogynistic), but Beauty on a Back Street is no one’s idea of a classic, include Hall or Oates.  $17.83 on Amazon, no download available.

Playlist: The Vest Best of Daryl Hall & John Oates (2014) – budget-line release from Sony.  Mostly radio edits, with a few key hits missing (“She’s Gone” of course, plus “Maneater,” “Say It Isn’t So,” and “You Make My Dreams,” all three of which were top five hits), and a few oddities added (the never-a-single “Don’t Change”).  $7.66 for the download on Amazon and $5.66 for the disc – this is one that would make the most sense as an impulse purchase for a car ride.  If you find it for $5.99 or so, a 51-minute best-of is a pretty decent deal.

As for solo best-ofs, there aren’t any.  Oates’ solo career has remained hit free (he didn’t get around to a solo album until 2002), while three of Hall’s four solo chart hits are from Three Hearts in the Happy Ending Machine.
Posted by Curt Alliaume at 6:33 PM