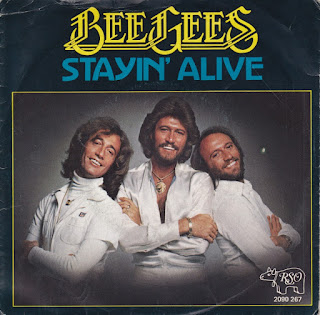 The Bee Gees, “Staying Alive,” #1, 2/5/78
And here come the Bee Gees songs. In fairness, we’re starting out with the best of the bunch, and a seminal song of the era that’s still played regularly on oldies stations to this day. Not everybody loves it – 40 years after The Bee Gees hit their zenith, and there are still people who can’t say their name with snarling – but if you want to pick out a song that will fill a dance floor, this is right up there. And it just may have kept some people alive, at that: NPR reported in 2010 the song’s 103 beats per minute (which keeps it far away from the disco standard of 126, by the way) is nearly the same as the recommended chest compression rate of 100 per minute – so EMTs have been taught to keep the song in their head when they perform emergency duties.


Queen, “We Will Rock You/We Are the Champions,” #4, 2/5/78
Another classic, but for entirely different reasons. Freddie Mercury wrote “We Are the Champions” with the idea of composing a song for use at football (soccer) matches, and it’s stuck. The pounding “We Will Rock You” made for a nice double A-side, with many stations simply putting the two songs back to back (at just over 5 minutes, it was a little longer than the average single song, but not ridiculously long – “Staying Alive,” for example, clocked in only about fifteen seconds shorter by itself). This would be Queen’s last top 10 hit in America using their ”classic” sound; after that they had “Crazy Little Thing Called Love” (minimalist rockabilly) and “Another One Bites the Dust” (Chic-inspired funk).  Not so in the UK, where they kept hitting for years after Freddie Mercury’s death.

Electric Light Orchestra, “Turn to Stone,” #13, 2/5/78
First of four chart singles from the double album Out of the Blue, and arguably ELO at its peak. Easy to dance to, but still appealing to rock fans (unlike, say, “Shine a Little Love,” the lead single off the 1979 album Discovery). Although none of the singles hit the top 10 in the United States, Out of the Blue made it to #4 and went quadruple platinum. (In fairness, the RIAA counts each sale of a double album as two since there’s two LPs inside, so that skews it a bit.) Out of the Blue was my first ELO purchase in 1979 (for the astonishing price of $3.99 at Korvettes; that was quite something for a double LP that hadn’t been remaindered), later on I found out ELO sued their distributors for releasing defective copies at discount prices. For what it’s worth, my copy’s fine.


Bill Withers, “Lovely Day,” #30, 2/5/78
The last of Bill Withers’ hits (excluding the Grover Washington Jr. song “Just the Two of Us,” for which he supplied lead vocals but didn’t get a credit on the sleeve), this song has had more covers and samples than I could possibly list – everything from a remake off The Bodyguard soundtrack to Luther Vandross to LL Cool J. But I love the original – this guy can really hold a note.


Donna Summer, “I Love You,” #37, 2/5/78
Clever title for a song, eh? First single from her Once Upon a Time album (released just before her total chart dominance from the summer of ’78 through early spring of 1980, where there was a total of one week without a Summer song in the top 40), and not a big hit. Still a fun song to dance to (especially when paired with “Rumour Has It,” which I believe it was on a 12-inch disco disk), and a bit of an oddity lyrically: in the fourth verse, was the lyric written that way (repeating part of the third verse and not rhyming), or did Summer just blow the lyric and no one said “We have to do a retake”? This sort of stuff bothers the crap out of me. The sound quality of this video isn't great, but it's cool to see a Tonight Show clip.

George Duke, “Reach for It, “ #54, 2/5/78
Late ‘70s funk from a guy who’s played with everyone from Frank Zappa to Jean-Luc Ponty. Ironically, for a song that features the chant “Dance!” over and over again (the only other lyrics are a spoken-word intro and the beginning and a quasi-rap at the end – almost two years before the Sugarhill Gang’s “Rapper’s Delight” broke), this isn’t a very danceable tune.


Heart, “Crazy on You,” #62, 2/5/78
You would have thought this was a bigger hit, given it’s been a staple of classic rock stations since the early 1980s. (And deservedly so.) The Wilson sisters’ message, born in the post-Vietnam era, was that the couple in question should just forget all their other issues for one night and boink. (Nancy Wilson added the rapid-fire guitar parts were inspired by The Moody Blues’ “Question.”) “Crazy on You” was actually the first single off their debut album with Mushroom Records in 1976, Dreamboat Annie, and reached #35 at that time (the followup, “Magic Man,” would really launch their careers. Two years later, Heart had bailed for Portrait Records, a subsidiary of Epic/Columbia, after Mushroom unveiled a particularly repugnant advertising campaign that would lead the unknowing to believe the Wilson sisters were lovers, and Mushroom scraped up whatever they could to make more money off their one-album wonder. First up was an album of demos and whatever else was lying around, Magazine, which the band sued to have recalled (the band then rerecorded, remixed, and re-released it a year later). The second was this song’s rerelease. Mushroom Records (also home to late ‘70s Canadian bands such as Doucette and Chilliwack, as well as ex-Fairport Convention member Ian Matthews) went out of business in 1980; the two Heart albums are still in print with Capitol Records today. The video is from the 1970s show The Midnight Special, which NBC aired on Friday nights after Johnny Carson.


Gary Wright, “Touch and Gone,” #73, 2/5/78
Yikes. Maybe you can have too many synthesizers on one record. Third consecutive flop single from Wright, after he’d had back-to-back #2 hits in 1976 with “Dream Weaver” and “Our Love Is Alive.”


Earth, Wind, and Fire, “Serpentine Fire,” #13, 2/12/78
EWF was on such a hot streak during the late ‘70s; 13 Hot 100 hits, all but one of which made the top 40, and six top 10s – nearly all of which will still make you smile when they come on the radio. “Serpentine Fire,” the lead single for All ‘n All, conked out at #13, but it’s still a good one, and it’s easily recognizable and danceable despite the slightly jittery rhythm.


Neil Diamond, “Desiree,” #16, 2/12/78
Another “boy becomes a man” song, this time courtesy of Mr. Diamond, who you’d think would have covered this territory before. Diamond’s singles track record had been spotty after leaving Uni Records for Columbia in 1973 – only “Longfellow Serenade” made the top 10 during those five years – so this was actually one of his bigger hits before the Barbra Streisand duet later in 1978.


The Commodores, “Too Hot ta Trot,” #22, 2/12/78
Knockoff of their own “Brick House” hit that had gone top 5 three months before; this is the one studio track from Commodores Live!, and it probably goosed up the sales a bit, it’s nothing special – although it does provide a break on greatest hits sets between Lionel Richie ballads.


Johnny Rivers, “Curious Mind (Um, Um, Um, Um, Um, Um),” #41, 2/12/78
30th (and, to date, last) chart single for Rivers. Geez, this guy was around forever – he first started hitting the charts around the same time as The Beatles. Most of his chart hits were covers, ranging from Chuck Berry’s “Maybelline” to Van Morrison’s “Into the Mystic,” and of course this one was one as well (Major Lance did the original, written by Curtis Mayfield of The Impressions). Not the best arrangement ever, but still a decent song.


El Coco, “Cocomotion,” #44, 2/12/78
Nearly wordless disco concoction that won’t make you miss the genre. Studio band led by W. Michael Lewis and Laurin Rinder. They had a few more Hot 100 hits under different names over the course of the year, so you’ll see them again soon, whether you want to or not.


Firefall, “So Long,” #48, 2/12/78
They sound awfully chipper considering the relationship is ending, but that’s just the way the band is. Seventh Hot 100 hit from a group made up of remnants from such bands as The Byrds, The Flying Burrito Brothers, and Jo Jo Gunne, and an inspiration for – well, when Roger McGuinn, Gene Clark, and Chris Hillman (three-fifths of The Byrds) got back together as a trio, Firefall’s producers were brought in to helm their debut album.

Kiss, “Shout It Out Loud” [live], #54, 2/12/78
I’m sure there was a logical reason for Kiss to release this as a single less than two years after the studio version hit #31 on the Hot 100, but I have no idea what it is.  It’s a really good song, no doubt – but when you release a double album with five new studio tracks, why make a live track that fans already know and that will confuse some radio stations the leadoff single?  (Casablanca would rectify this somewhat by making “Rocket Ride,” one of the studio tracks, the second single.)

Prism, “Take Me to the Kaptin,” #59, 2/12/78
No, that’s not a typo.   This was Prism’s second chart hit, after “Spaceship Superstar” made #82 in 1977 with “Spaceship Superstar.”  Both songs are on Prism’s eponymous first album, which would be the one to get if it was still in print.  Prism’s membership history is a little strange – by the time the band “broke up” in 1983, there wasn’t a single member from the 1977 group left, and the name Prism was used primarily by a solo artist and his backing band – and Capitol Records has made some of their better albums unavailable as a result.

Cerrone, “Supernature,” #70, 2/12/78
This French disco master (full name Marc Cerrone) has his fans, but I swear I don’t know what they see in him. I guess it’s good for dancers who are more interested in monotonous beats rather than hooks and catchy melodies; I’m not one of those people.  From his album of the same name (also known as Cerrone III). He’s still releasing albums in France, but hasn’t had a release here in the U.S. since sometime in the early 1980s.

Billy Joel, “Just the Way You Are,” #3, 2/19/78
The song that made Billy Joel famous. Up until this point, Joel had released four albums and was experiencing diminishing returns (none of the singles from 1976’s Turnstiles charted at all), and his biggest hit, 1973’s “Piano Man,” only made it to #25. But this song, which apparently was a contender to be dropped from the album (producer Phil Ramone claimed it had to stay because there wasn’t much other material available, and Joel has said both Linda Ronstadt and Phoebe Snow, who were recording in the same studio, insisted it should stay), became the lead single and radio grabbed hold. It would be first of Joel’s 27 top 40 singles between 1977 and 1994.  Written for Joel’s first ex-wife (as he might note, as opposed to his second ex-wife or his third ex-wife), which was a reason he didn’t perform the song much in concert for many years.

Santa Esmeralda, “Don’t Let Me Be Misunderstood,” #15, 2/19/78
This song has had a long, interesting history.  It was originally written by songwriter Horace Ott after a fight with his girlfriend, Gloria Caldwell. (Don’t worry, kids; they’ve been married for over 50 years.) Nina Simone originally released it on her album Broadway-Blues-Ballads in 1964, but The Animals took it up to #3 as a blues classic the following year. Santa Esmeralda was a disco group formed in France, where this song was recorded in 1977. Casablanca Records, which was cornering the disco market at the time, picked it up for international distribution, and it became a major hit for the second time.