Find Us In Good Company 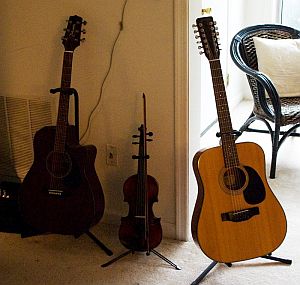 So at one point I was gabbling away at my wife, describing the great things we were gonna do with "South Street" -- it's gonna be a rock song, not a ballad, it's gonna have a tough, kicking drumbeat, electric guitars, fiddle, piano, organ, etc., etc.

"I think you should leave it the way it is," my wife replied, which gave me pause.

It gave me pause because, despite a lack of a formal musical background, my wife has (among many other things) an uncanny and deadly accurate ear for what makes a good song. But of course, she couldn't be right this time, because after all, I was hearing hard drums and pianos and electric guitars and choo-choo trains for all I knew, and an artist should trust his or her instincts above everything else, right?

So we set to work in Dave's basement studio, rehearsing the song again and again. We set down guitar and drum and vocal tracks, looking for the sound I was hearing in my head, basing much of the arrangement on what we had done at Jammin' Java. It was good work; patient and competent and talented work, but in the end it wasn't very much fun. Well, you know, we were just getting going. The song would no doubt come together in the final mix, wherein everything we were looking for would fall into place, and there would be the song.

But then I went back to the demo I recorded with Dave, and I listened and re-listened, and I figured out that what I loved about this version was Dave's masterful guitar work. I realized the lead part was the song's heart -- it was the dramatic transition between the bittersweet memories of the first verses and the wistful musings of the finale. Dave had played an electric version of the lead, live and in rehearsal, which was splendid and up to Dave's usual level of excellence -- but it wasn't the lead in that demo. And I realized my wife was dead-on correct, as always, that the original demo should be the basis for the final recorded version of the song. I presented this to Dave, unsure what he would think, but after listening to it again he agreed, enthusiastically.

So that's how we're going to work it. The guitar parts will form the basis for the final version of "South Street", with a new set of vocals and soon-to-be arranged and layered instrumental parts. Cello, piano, soft drums (rather than hard kicking ones), bass, and maybe even a choo-choo train. But those gorgeous lead and rhythm parts will remain as they are, as the heart and soul of the work. I think we have a good shot at making a great little piece of work out of this song.

As usual, my wife was right.